Why the Corps of Engineers must remain at St. Anthony Falls | Friends of the Mississippi River
Skip to main content

Why the Corps of Engineers must remain at St. Anthony Falls 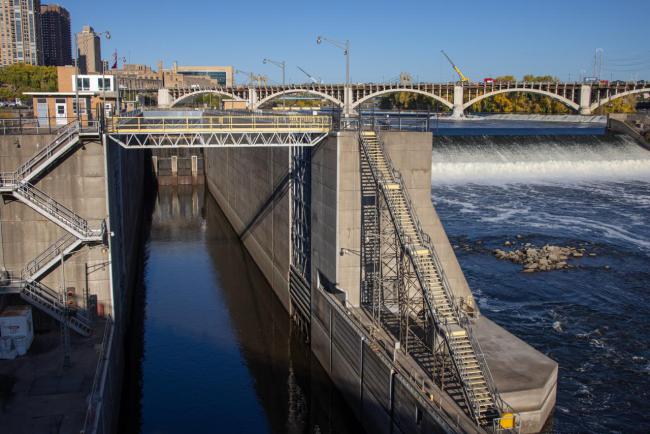 Dr. John Anfinson is an FMR board member, a Mississippi River historian and the former superintendent of the Mississippi National River and Recreation Area. He recently wrote this article for the Northeaster newspaper.

St. Anthony Falls lies one tick of the geologic clock from ending a 12,000-year journey up the Mississippi River from St. Paul. When that tick slips, the reservoir above the falls will drain away, and the river will begin cutting down its bed, adjusting to a 49-foot difference between the river above and below the cataract. This disaster would threaten the Twin Cities water supply, downstream navigation, upstream infrastructure, billions in public and private riverfront investments and the opportunity to transform the Upper St. Anthony Falls Lock into a world-class visitor attraction.

Holding back the clock is a 1,850-foot-long cutoff wall that stands 40 feet high and four to six and one-half feet wide. Built between 1874 and 1876 by the St. Paul District, Corps of Engineers, it lies under the Mississippi River, beneath the last thousand feet of the limestone riverbed. For over 144 years it has withstood the relentless demands of nature to finish its task.

No one knows when the cutoff wall will fail. It could be tomorrow or in 100 years or more. No one claims ownership of the cutoff wall, and no one acknowledges responsibility for inspecting it, maintaining it or - if it fails - repairing it. Who should?

The Corps is the logical choice. They built the wall and undertook much of the infrastructure repairs caused by the Eastman Tunnel collapse in 1869. They built the lock and own two short dam sections. Because the lock closed to navigation in 2015, however, the Corps wants to walk away. In their draft disposition study, they recommend Congress deauthorize their navigation and recreation missions. Yet, those missions are clearly in the federal interest, as is water supply.

If the cutoff wall fails, the river would cut down its bed for 30 miles upstream, according to the Corps. This erosion, they warn, “would have profound impacts on water turbidity and sediment load that would continue for many decades. The sediment influx would end up in dredge shoals in Pool 2 and would likely result in increased dredging.” The extra dredging would cost millions. So even if no commerce passes through the Upper Lock, downstream navigation depends on the cutoff wall.

Few St. Paul District projects match the federal interest represented by preserving the Twin Cities water supply. Minneapolis draws all of its water from the Mississippi River and St. Paul seventy-five percent. Losing the St. Anthony Falls reservoir and the ensuing streambed erosion would eliminate the Minneapolis and St. Paul water intakes. Minneapolis has a three-day reserve; St. Paul can get by on its wells and lake reserves for longer but not long-term.

Together, the two cities supply 16 suburbs and over one million Twin Cities residents. They supply businesses with national and international connections, universities and colleges and K-12 schools, public institutions and professional sports venues, and regionally important hospitals. In normal years, nearly 40 million people pass through the MSP Airport. A loss of water to the airport would reverberate nationally and internationally.

Depending where the cutoff wall failed, parts of the riverbed, dam and spillway at St. Anthony might collapse. The falls - the primary attraction for billions of dollars of riverfront development - would disappear. The immense recreation potential from an adaptively reused lock would fade.

At their March 3 public meeting, Corps staff protested that everyone wanted them to remain, but no one was willing to share in the costs. On the contrary. Many partners have stepped forward to advance a vision for transforming the lock into a premier recreational destination, drawing visitors from around the country and the world.

Friends of the Falls has secured $2.8 million from the State of Minnesota and has proffered a $2.5 million match. The National Park Service took over visitor management at the lock in 2016. Mississippi Park Connection has helped fund key improvements and interpretation at the site. The National Parks Conservation Association has engaged the public in thinking about the lock’s future. As a world-class destination, the lock would attract millions in funding.

This isn’t about a political power play. The federal economic benefits substantially outweigh the costs, which the Corps’ final analysis should demonstrate. Rather than waiting for voters and Congress to force it upon them, the Corps has an opportunity to advise Congress that they still have federal interests for remaining at the Upper St. Anthony Falls Lock. Remind your congressional representatives of this obligation.

To get involved in the future of the Twin Cities' locks and dams, become an FMR River Guardian. We'll contact you when about events and action opportunities to speak up for our river.