Native snakes are important to natural communities since they play roles of both predator and prey. They consume large quantities of rodents, insects, worms, and small invertebrates, which also benefits people.

In order to survive, snakes require food, cover, nesting habitat, and hibernacula — a place to hibernate over the winter. Foundations of houses or garages, burrows created by other animals, ant mounds, buried underground chambers, or merely deep cracks in surface bedrock serve as hibernacula for overwintering snakes. But a number of studies have shown that a lack of adequate hibernacula is a limiting factor in the success of native snake populations.

FMR and Flint Hills Resources, with the help of Great River Greening, built a snake hibernaculum in the Pine Bend Bluffs Natural Area on FHR property, just west of the Mississippi River, in Rosemount, Minn. Over two days — June 25 and 26, 2013 — the hibernaculum was built by excavators provided by FHR and by FHR employee volunteers. By building this hibernaculum, and by restoring natural habitat on the property, we are taking part in protecting snakes and helping to restore their populations. A good hibernaculum is not easy to find. It should be positioned outside of the 100-year floodplain on flat or south/west-facing slopes. It should also have features that might attract snakes, like a slope near a ridge top, or an opening surrounded by woodland. In order to get the spot just right, we enlisted the help of three wonderful state herpetologists from the Minnesota Department of Natural Resources. Of several potential sites, we narrowed it down to the best one for this location.

Because it's a rather new conservation practice, no one really knows exactly how to build an ideal hibernaculum. But during the design phase our plans were informed by examples from the Wisconsin DNR and Trout Unlimited. It turns out that a good hibernaculum should be a secure den with low temperatures that remain above freezing. Thus, we dug the pit about 3 feet wide and 10 feet deep, well below the frost line. To keep the snakes from drying out, we also added organic matter — several large logs — to hold moisture.

Because snakes like space to crawl around and settle down for the long winter, but also like to be snug and cozy, we piled up lots of large limestone rock, so that the spaces between the rocks were just right for them.

First, the FHR excavation crew dug the pit, installed a geotextile liner and placed the first layer of larger, heavy rocks. Then a group of spirited volunteers placed the smaller and remaining rocks and logs into the main chamber and entryway. Volunteers then wrapped the entire rock structure with the liner, "just like a burrito," explained one volunteer. The excavator filled over the structure with 6 feet of soil, and lastly we seeded the top of the berm with local native prairie species. All told, it took only about 8 hours to build.

For the most part, snakes are beneficial to us. Medium and large snakes eat large numbers of rodents, which helps keep rodent populations in check and also to curtail Lyme disease. They also consume large quantities of insects, worms, and small vertebrates. Snakes are a valuable food source to small mammals and birds (especially hawks), which prey upon small and young snakes.

Unfortunately, snake populations have declined in the Midwest primarily due to habitat loss and human persecutions, which continues even today. (Only two of Minnesota's 17 species are venomous. Both are home to southeastern Minnesota and are rarely encountered.)

We plan to monitor the area for snakes and to see if the hibernaculum gets used. Hopefully we will be able to see lots of snakes, soon and well into the future! 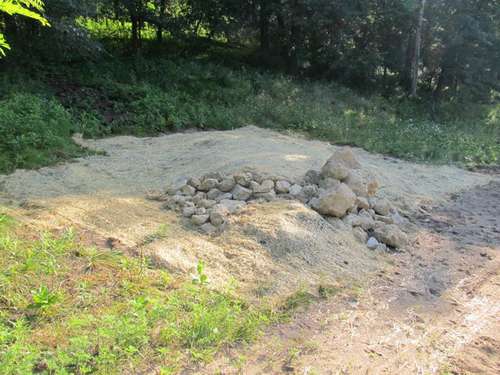