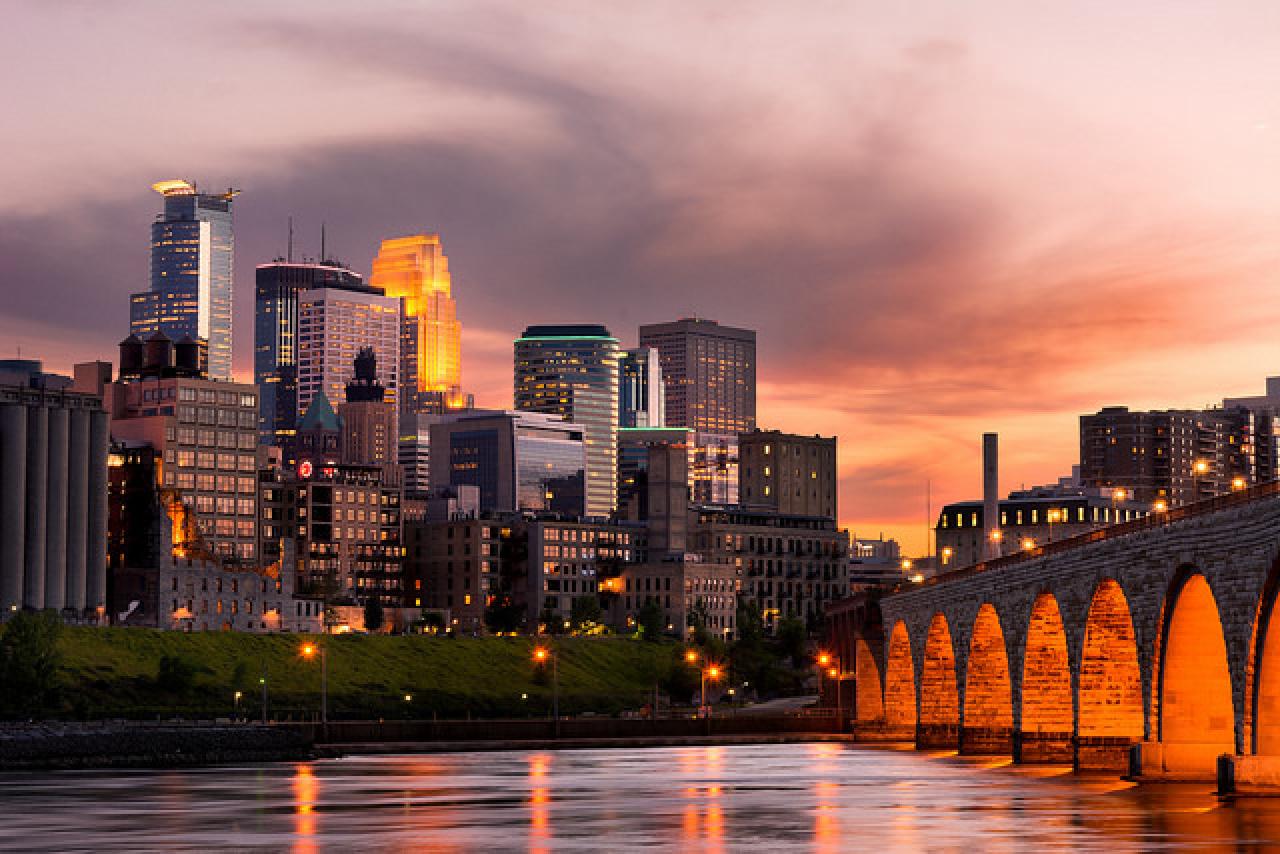 Venture along with us to a few downtown Minneapolis riverfront icons — Nicollet Island, the Stone Arch Bridge and the Mill District. Many of you have been here before, but along the way we'll be sure to point out lesser-known spots, facts and the scoop on changes to come. 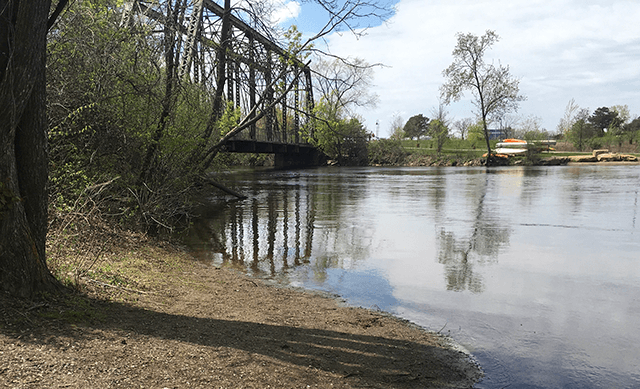 Nicollet Island, in the foreground, is both a hideaway and a hub. The partially naturalized island connects by trails and bridges with St. Anthony Main, the Hennepin Avenue Bridge and (above) to Boom Island in northeast Minneapolis.

Bisected by the Hennepin Avenue bridge, Nicollet Island sits in the Mississippi River just above St. Anthony Falls. Home to the iconic Grain Belt Beer sign as well as DeLaSalle High School, the Nicollet Island Pavilion, and many historic homes, the island has been a hub of industrial and residential use dating back to the 1800s.

Today, natural areas occupy much of the northern half of the island, and a trail connects the island to neighboring Boom Island Park to the north. Residents and passersby alike frequently enjoy the trails and natural areas on the island while simultaneously taking in views of downtown Minneapolis.

FMR staff are particularly fond of the east channel of the river between the island and B.F. Nelson Park. (See map below.) Stroll along the crushed gravel path under a canopy of towering cottonwoods and hackberries and you'll likely see turtles basking on logs, herons wading along the banks, and an active beaver lodge in this urban oasis.

We'd also like to invite you to be part of a new Nicollet Island project: restoring the native forest and prairie on the island's northern half!

In 2017 FMR partnered with the Minneapolis Park and Recreation Board and Mississippi Watershed Management Organization to lay out detailed plans to restore the island's upland natural areas. Restoration will soon be underway, thanks to funding from the watershed organization and the National Fish and Wildlife Foundation, beginning with removing invasive plants and planting native trees and shrubs in the forested areas and creating two acres of native prairie habitat.

Moreover, thanks to the Nicollet Island-East Bank Neighborhood Association, the current trail on the east side of the island is going to be extended through the restored prairie and south to the Merriam Street Bridge. (A current snapshot is available here, and this project area is marked on the map below.)

Keep an eye on Mississippi Messages for our Nicollet Island restoration kick-off meeting, or contact volunteer coordinator Amy Kilgore, akilgore@fmr.org, if you'd like to be notified of volunteer events to restore Nicollet Island habitat.

From the island, head downstream on the trails along either bank to see St. Anthony Falls and make your way to the Stone Arch Bridge.

It's hard to believe this ever-popular bike and pedestrian bridge began as "Hill's Folly" and spent years closed to the public.

To call the Stone Arch Bridge iconic is an understatement. Located just south of St. Anthony Falls, the 2,100-foot long former railroad bridge has been featured on postcards of the city for decades, is the number two Twin Cities destination according to U.S. News and World Report (second only to the Chain of Lakes), and is included in nearly every travel guide from Fodor's to the Atlas Obscura.

The only stone bridge spanning the Mississippi River, the Stone Arch Bridge is a marvel of engineering even non-architecture buffs can appreciate. Educational kiosks abound on the bridge, so we won't go into details, but bear in mind as you approach that this massive structure was built in 1882 and 1883 by hand and hoof — each stone in this 100,000-ton bridge was placed just-so by men using horses, ropes and pulleys.

Another thing to bear in mind: It hasn't always been popular.

While it was being built, the bridge — first major passenger railroad bridge to cross the river into downtown Minneapolis — was often referred to as "Hill's Folly" due to its immensity and cost. Its 23 arches and curved route were unprecedented, as was its $650,000 price tag. Once completed, however, it quickly became a symbol of the city.

... Until the last train crossed the bridge in 1981. Then the bridge was fenced off and sat largely ignored amidst the remains of flour mills, with only trespassers able to enjoy its amazing skyline and St. Anthony Falls views.

It took a dedicated community and visionary civic effort to reclaim and repurpose the bridge. But the bridge re-opened in 1994, refurbished and ready to become the beloved pedestrian and bike bridge that it is today.

Now the bridge is headed for another re-do, with the Minnesota Legislature considering $13 million to replace all of its mortar and roughly a fifth of its stone. But you have plenty of time to visit before you'd need to check for construction updates. If approved, work would begin in 2020.

The Mill District – A Powerful Place

At the south end of the Stone Arch Bridge is the Mill District, which earned Minneapolis the title of “Flour Milling Capital of the World” from 1880 to 1930. Today this area is visited annually by millions of people, from locals who frequent the paved walking and biking paths, to world travelers in search of our famed river’s only waterfall, to the people of every stripe who gather to attend festivals and watch fireworks.

One of the best things to do (and the cheapest) is viewing and listening to the falls themselves. There are several good places to do this, but if you want a National Park Service ranger to keep you company, check out the Upper St. Anthony Falls Lock & Dam Visitor Center.

After the lock closed to commercial navigation in 2015 to prevent the upstream spread of invasive carp, our local National Park Service unit (the Mississippi National River & Recreation Area) began staffing the visitor center during the summer months. They offer three tours a day mid-June through August and weekends in September.

If tours aren't your thing or don't mesh with your schedule, the Endless Bridge at the Guthrie Theater is another great spot to view the falls. It is free and open to the public 8 a.m.-8 p.m. (and until 11 p.m. when productions are running).

The Guthrie is one of several well-known institutions in the area, along with Mill City Museum. Built inside the burned ruins of the historic Washburn-Crosby Mill, the museum is fun and fascinating year-round, but if you're looking for an outing on a snowy or rainy day, it's a nice warm place to learn about Minneapolis’ milling and baking industries and their often dramatic relationship to the river.

Another big name in the area is Mill Ruins Park. However, while the ruins featured here are the centerpiece of the Mill District and its revival, surprisingly few people venture down the adjacent Stone Arch Bridge to enjoy them. Duck away from the crowds, and you could enjoy a quieter moment amongst the stone remnants of mills, canals and tailraces buried in sand and gravel not all that long ago.

If you don’t mind crowds, go on a Saturday morning and check out the Mill City Farmers Market a vibrant marketplace with locally grown and sourced goods.

What's next for the Mill Ruins District? It's expanding to the north and plans are in the works for better pedestrian connections to the neighborhood as well a new restaurant featuring Native American cuisine, The Sioux Chef. Learn more about the exciting plans for Waterworks, or head down there this summer to watch the construction in action!


Zoom in to explore this interactive map. Click the blue stars to learn more about the locations profiled in this article or view in full-screen via the squarish icon top right.

This profile of the Central riverfront is part of FMR's 25 Special Places project, which we undertook to celebrate our silver anniversary year and the metro Mississippi River in 2018. We've compiled all these places into our Explore the River page, an interactive Google map and set of guides to help you get to know the river that shapes our metro area.