The twinkling lights of summer 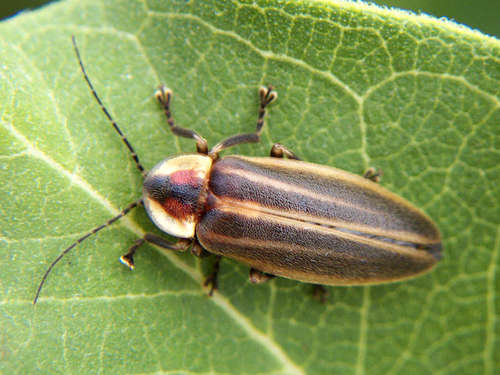 After overwintering as larvae, adult fireflies emerge in early summer and begin to look for mates. They can often be found resting on foliage during the day.

The flashing lights of fireflies are a hallmark of Minnesota summers, creating a twinkling show reminiscent of a holiday display. Fireflies, also called lightning bugs, are a type of beetle, in the aptly named family, Lampyridae. Both males and females signal by illuminating the lower part of their abdomen as they fly or sit on foliage. In most species, the males use their lights to attract females. The male flies over an area where he is likely to find a female, flashing as he goes. A female perched in the foliage will see the signal and respond with her own. After a series of signals and responses, the male finds the female and mates with her.

The light show starts in June and can continue into August, as fireflies flash their particular message in search of a mate. There are seven species of fireflies in Minnesota, and each has its own flash pattern. Watch carefully for differences in the duration of the signal and the interval between signals, the number of flashes in a signal, the distance the beetle flies during the signal, and the time of day of the signal. Even the color of the signal varies. Species that are active at dusk, for instance, tend to give a yellow light, while those active in darkness tend to give a green light. Each species also tends to be found in its preferred habitat  swamp, woods, meadows, etc.

The light itself is created by a chemical reaction with the compound luciferin. Firefly larvae of many species also produce this compound, but rather than flashing they produce a steady light and are called glowworms. The luminescence is thought to serve as a warning for predators, as the glowworms may be toxic or distasteful. The larvae are voracious carnivores, feeding on other insects, earthworms, slugs, and snails. They follow the slime trails of their prey and stun them with poison injected by their mandibles.

The adult diet is not well-documented, though they have mandibles that suggest they could be predaceous. Females of a few species in the genus Photuris have been documented as exhibiting aggressive mimicry. These females, after mating, imitate the flash signal of females of another species in order to attract a male of that species. When the male arrives, she eats him! This behavior may be a way to not only obtain food, but also to obtain important defensive chemicals, which they do not produce in large quantities.