5 key issues regarding the future of the locks and dams 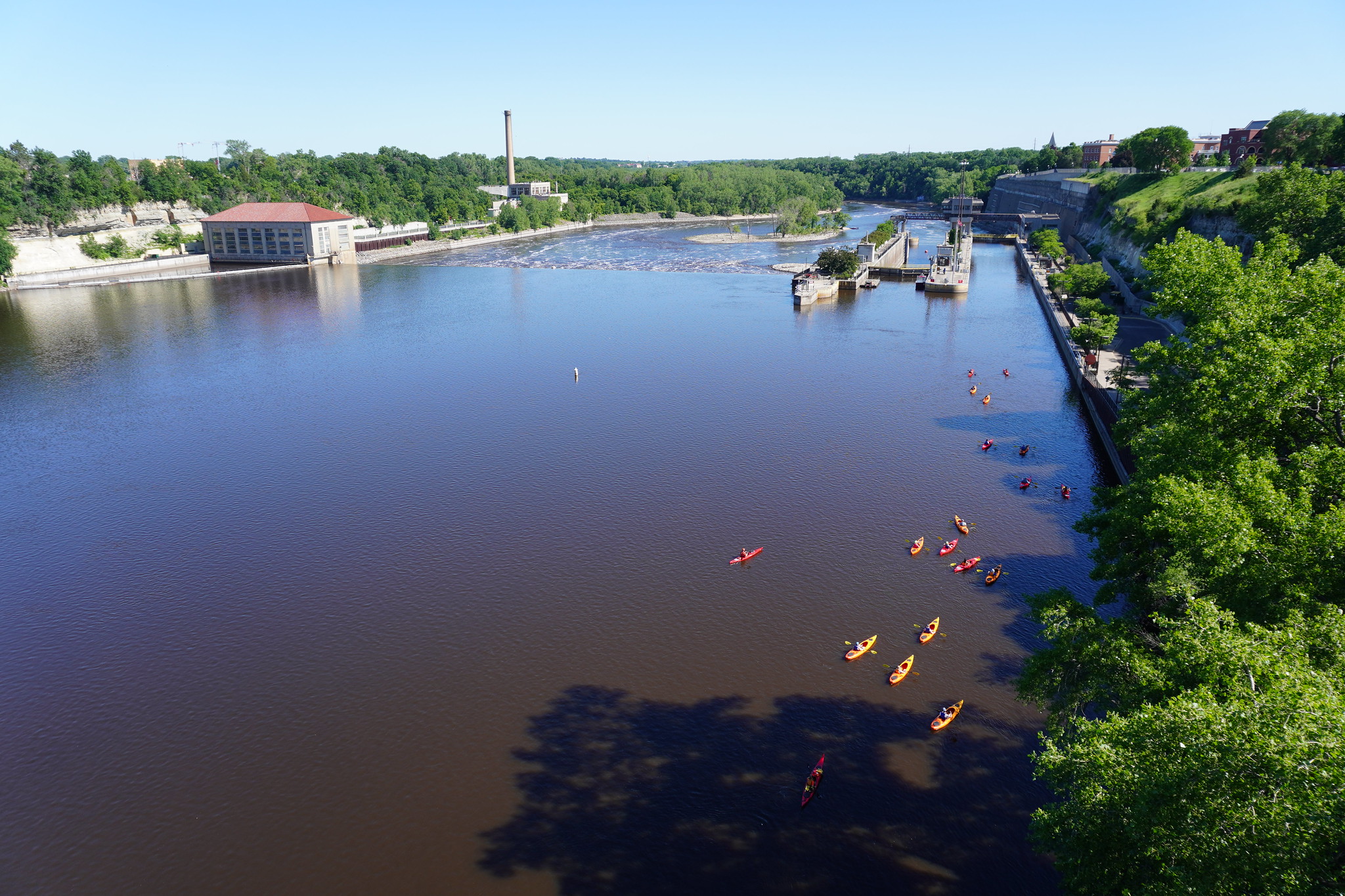 Lock and Dam 1 changes the Mississippi from a free-flowing river into a more lake-like ecosystem. We're asking the Army Corps to study the costs and benefits of restoring the river. (Photo by FMR)

The U.S. Army Corps of Engineers is beginning its disposition study to consider the future of the Lower St. Anthony Falls Lock and Dam and Lock and Dam 1.

Following a public comment period that saw hundreds of submissions, this first phase of the study (called scoping) will determine which questions, research and implications must be considered as the Corps weighs the costs and benefits of various future scenarios.

In addition to the more than 170 comments submitted by River Guardians (read more about those submissions here), FMR weighed in with a joint letter submitted alongside two environmental partners: the National Parks Conservation Association and American Rivers. The letter raises detailed questions while noting the Corps’ legal requirements to respond to them.

Since the full letter is over 35 pages long, we've pulled out five of the key topics and summarized them here.

Requirements for environmental review and mitigation

The science is clear that dams are environmentally harmful to river habitats, the wildlife that depends on those habitats and water quality. Dam removal could pose the most significant opportunity we’ve had in more than 100 years to restore the health of our metro Mississippi. Only the best research possible will help us understand the costs and benefits of this possibility.

The Corps is legally required to conduct a full environmental review (known as an Environmental Impact Statement, or EIS) as part of the disposition study. If the Corps instead attempts a more limited study, we won’t get as much information about what different scenarios could mean for our river.

Crucially, federal law also requires the Corps to mitigate the environmental harms of any future scenario they pursue. This means that should the dams remain in place, the Corps could be held responsible for addressing the damage it has perpetuated since Lock and Dam 1 was constructed in 1917, and it must factor in that mitigation expense as it weighs the costs and benefits of dam removal.

Our comments ask the Corps for a detailed study of hydropower costs and benefits, methane emitted by dammed rivers, habitat for endangered species, the sediment backed up behind the dams, anticipated impacts of climate change and other environmental issues.

This river area has deep significance for Indigenous people, including the Dakota. Yet tribes are too often sidelined in decision-making processes such as these. We’ve asked the Corps to provide sufficient time, access and funding so tribes can have true leadership in this process.

We’re working with our Indigenous partners to support their involvement, as well. Some have told us that they’re interested in exploring whether tribal ownership and/or removal of these locks and dams could be an opportunity to restore Indigenous land rights. 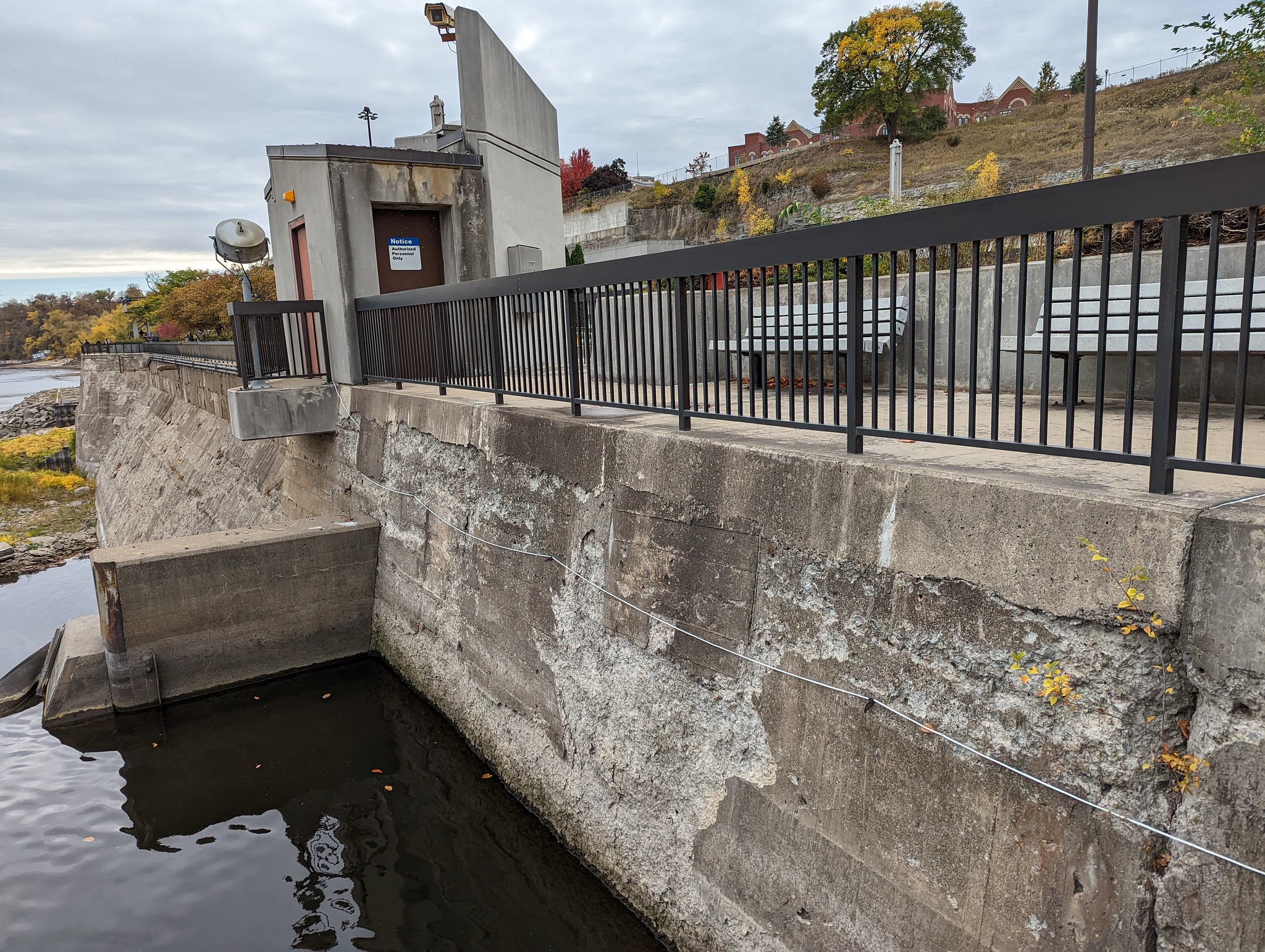 Lock and Dam 1 is already showing signs of deterioration and deferred maintenance. Without better care, this structure will become an eyesore and hazard. (Photo by FMR)

Prior Corps studies found that the river scour (erosion) below Lock and Dam 1 is severe and could pose a serious risk to the dam's long-term stability. The Corps initially categorized this problem as "High Urgency" but later downgraded that rating — not because the structure was repaired, but because the relative risk of loss of life from a failure was low.

This structure needs more maintenance by the Corps or any other future owner. Currently, neither the Corps nor any prospective owners have a financial incentive to do anything above the bare minimum.

We should all be concerned that the Corps is studying transferring ownership of this deteriorated structure to an as-of-yet unidentified entity without any mechanism for ensuring that a new owner is competent and adequately capitalized for long-term maintenance. And even the Corps continuing to own the dam with the absolute minimum of maintenance would pose a risk, too.

We’ve asked the Corps to provide additional detail about the dam's stability, risk analysis of failure in the next 50 years, cost estimates for repair and details about how they will vet potential owners to ensure they are capable of meeting the community's needs for structure maintenance, security and stability.

We’ve also asked the Corps to assess the other impacts of vacant and/or deteriorating structures being left in the middle of Minneapolis and St. Paul’s riverfront. Without improved maintenance, the locks and dams will become eyesores and hazards.

Dam removal would lower water levels in the Gorge starting below St. Anthony Falls and down to the Minnehaha Falls area. Lower water levels would expose more of the piers on ten bridges, leave stormwater outfalls hovering high above the river and affect other infrastructure.

The disposition study needs to answer our questions about how these changed conditions would affect our urban infrastructure and what the costs would be for any needed adaptations.

We also asked the Corps to provide more information about the Meeker Island Lock and Dam, the first lock built on the Mississippi River. This historic structure was taken out of service, but it remains in the river (just below the Franklin Avenue bridge) and would be exposed again if Lock and Dam 1 were removed.

We asked the Corps to respond to several detailed questions about the impacts of different scenarios on parkland, public access and recreational uses in the gorge. While the differences in recreational uses between a dammed and undammed river have drawn a lot of interest, we’ve seen less consideration of what would happen if the dams stayed but under private ownership.

For instance, either the Corps or a new owner might cease all operations at Lock and Dam 1 for recreational and tour boats, eliminating the last access point for motorized boats to enter the gorge and sharply reducing canoe and kayak use in the gorge.

The Minneapolis Rowing Club and University of Minnesota rowing programs currently use this section of river. Without dams, these programs would have to move upstream, downstream or to lakes. We’ve asked the Corps to study the impacts to rowing under different scenarios.

Dam removal would also open up new recreational opportunities, including expanded shoreline and islands. The Corps should study the economic and recreational impacts of a changed river.

The future of our locks and dams is a challenging and nuanced issue, and it is clear the community is eager to learn more about what this might mean for the river and our communities. You can read more about the Army Corps' next steps in this FMR update.

You can also sign up to be a River Guardian. We’ll keep you informed with the latest updates about the future of the locks and dams as we learn more.