The full Minneapolis City Council has approved the concept plan. (Media coverage on the vote from Kare 11 and MPR.)

However, the plan still contains elements that FMR does not approve — most particularly a $49 million privately operated music venue built within the boundary of the Above the Falls Regional Park.

FMR will continue as an active advocate for a community-centered process that delivers a plan that respects the river, provides a welcoming and well-connected park, meets the communities’ needs and works toward racial and economic equity. Here's our updated strategy, and we'll continue to post updates in our e-newsletter.

The Minneapolis Upper Harbor Terminal site is key to improving the North Minneapolis riverfront. Done correctly, the redevelopment of this city-owned site can better connect residents with the river and be a model of sustainability and community wealth-building. So why would the city let private companies take the lead and reap the majority of benefits?

A Minneapolis City Council committee is considering a plan that does just that. On February 5th, they'll make their decision to approve the plan and send it on to the full council, or not. (Ready to take action? Click here.)

The plan could prioritize equity, public access and sustainability as called for in the bold vision of the award-winning master plan for the area. Instead, it features a private concert venue and hotel, less parkland and river access than originally called for, and less opportunity for development that truly serves community needs.

As we wrote in this Star Tribune commentary with Paul Bauknight, we consider this current concept plan for the Upper Harbor Terminal site a missed opportunity.

And we're not alone. Friends of the Mississippi River joins a growing coalition of neighbors, community stakeholders and nonprofit organizations and urges the Minneapolis City Council committee not to approve the concept plan in its current form. Instead, the city should take more time and engage the community in a deeper and co-creative planning process for the site.

How did we get here?

A barge terminal until 2014, the city owns the 48-acre Upper Harbor Terminal site located in North Minneapolis between Lowry and Dowling Avenues. 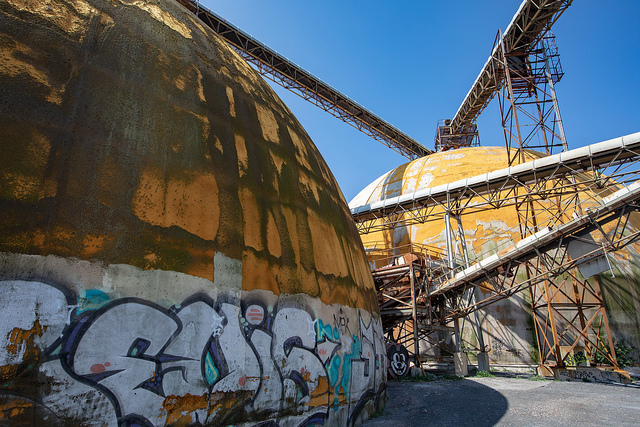 From the river, the Upper Harbor Terminal storage silos look iconic. Large, orange domes rise up along the riverfront, now tagged with bright graffiti. (Photo by Tom Reiter for FMR.)

Even before its days as a shipping terminal ended, the site — which stretches along 1 mile of riverfront — was recognized as a linchpin in city and park board plans to transform the riverfront in North Minneapolis from private, industrial land to public parks, trails and community investments.

Because of its large size and the fact that the public already owns the land, the Upper Harbor Terminal site presents a rare opportunity for the city and park board to prioritize and follow through on this vision. We should be asking: How can riverfront redevelopment leverage the value of the river while truly serving Northside needs and aspirations?

But in 2017, the city and park board entered into an agreement with a development team (including United Properties, Thor Construction and First Avenue Productions) to come up with a set of options for how the Upper Harbor Terminal site and its long-planned riverfront regional park could be transformed.

In August of 2018, the team presented a single concept for public review. Since that time the developers, city and park board have held several public meetings to share the plan with the community and gather feedback.

But, with only one option presented, the process has been essentially developer-driven. The community deserves an opportunity to explore alternatives that could better serve residents and enhance the river.

FMR has been deeply engaged in planning for the future of the riverfront in north and northeast Minneapolis for more than 20 years.

We have long advocated for a redevelopment of the site that would be grounded in the principles of ecological health and sustainability, public access to the river and equitable development that addresses community needs without displacing current residents. That advocacy has paid off — these are the guiding principles the city established for this development process as well.

But the current concept plan fails to meet these principles. Here are our main objections:

In addition to these concerns with the proposed concept plan itself, FMR believes the process used by the city and the developers was flawed.

For this site, the city essentially outsourced the development plan to private developers who drove the priorities, evaluated the trade-offs and decided on the final proposed plan. One static plan was offered for community comment, but without any opportunities for exploration of alternative concepts or comparison of costs and benefits.

Since the Upper Harbor Terminal is publicly owned, the city has complete control over what's developed here and the process used to determine its future. This is a rare opportunity for the city and park board to adopt a planning process that truly engages neighborhood residents and community stakeholders as co-creators and partners alongside developers, city and park board staff.

We support residents' calls for a process that serves the larger socioeconomic goals of the community. In such a process, community participants would have the opportunity to gain a better understanding of the constraints as well as the possibilities of the site to address community needs.

The city's Economic Development and Regulatory Services Committee will consider the concept plan on January 22. Despite broad community opposition, the committee is so far not planning to allow public testimony at the meeting. If approved by the committee, it will advance to the full council for approval on Friday, February 1, 2019.

Join FMR and a growing coalition of neighbors, community stakeholders and nonprofit organizations by urging the mayor and city council via the form below to ensure equitable benefits to the Northside community, and prioritize affordable living, environmental justice, community wealth-building, and river access.