Gov. Dayton vetoes awful environmental bill! (But another is on the way.) | Friends of the Mississippi River
Skip to main content

Gov. Dayton vetoes awful environmental bill! (But another is on the way.) 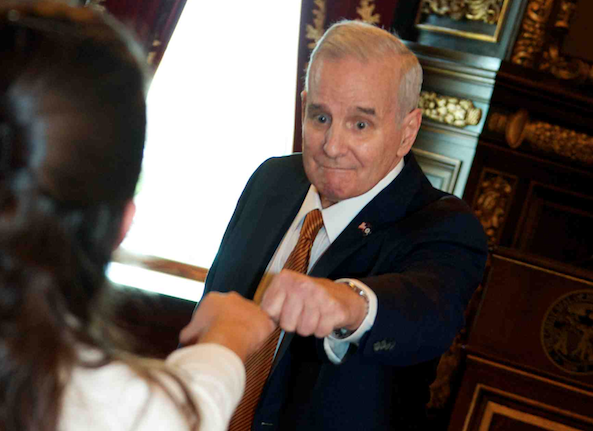 We really wanted to give Dayton a hearty fist bump (like this young Water Action Day participant did this April). Instead, we issued a press statement. [Photo by Anna Botz]

Friday, May 12, Gov. Mark Dayton vetoed a historically bad omnibus environment bill. It sought to give polluters the right to write their own environmental impact statements, slashed funding for environmental agencies and even prevented cities from banning plastic bags.

You can read all about it in the press statement below, but, in short, it threatened to undermine Minnesota’s long tradition of protecting the water we drink and the air we breathe.

Now we need the governor to continue to stand strong, and we call upon our legislators to remove bad policy provisions and restore cuts to our environmental agencies from bills in the works.

You can help by becoming a River Guardian! We make it fast easy to contact your legislator and only email when your voice is needed the most. Also, if you're available Monday, May 15, 4:30-6:30 p.m., please join us outside the Governor's Residence as we thank him for his veto and encourage him to stay strong (RSVP).

FMR thanks Gov. Mark Dayton for vetoing the omnibus environment and natural resources finance and policy bill. Its unprecedented budget and policy rollbacks would have harmed Minnesota’s great outdoors, contrary to the wishes of Minnesotans across the state.

St. Paul, MN: Friends of the Mississippi River applauds Gov. Mark Dayton for standing up for Minnesota’s waters and vetoing the omnibus environment and natural resources finance and policy bill.

“This environment bill is historically bad, and undermines Minnesota’s long tradition of protecting the water we drink and the air we breathe,” says FMR Executive Director Whitney Clark. “We thank Governor Dayton for his leadership in standing up for our rivers, lakes and streams and for the majority of Minnesotans who want to keep protecting them.”

Despite Gov. Mark Dayton’s request to keep policy provisions out of budget bills, the environment bill included 34 pages of finance provisions and 108 pages of policy.

“Governor Dayton was right to send it back,” Russell added. “Everyone who visits a lake or the river this gorgeous spring weekend should thank him for keeping it healthy.”

2) Having polluters prepare their own Environmental Impact Statements
Provisions in the bill would have allowed corporations to write their own Environmental Impact Statements. This effectively puts the fox in charge of the hen house, and makes the hen house private since data used to prepare a private EIS would not be subject to the Data Practices Act – keeping Minnesotans in the dark about the information used to prepare it.

3) Undermining the Environmental Quality Board
The bill sought to repeal key duties and powers of the EQB, barring it from cooperating with regional development commissions or establishing internal or citizen task forces to study pressing environmental issues of community interest across the state. This comes on the heels of the Legislature’s highly controversial 2015 move to repeal the Minnesota Pollution Control Agency Citizen’s Board.

4) 16-year wastewater treatment upgrades holiday
This provision would have exempted cities that build public water treatment facilities from upgrading their systems to comply with new clean water standards for 16 years.

5) Scientific ‘do-over’
This unusual provision would have allowed cities to petition for a “re-review” of agency science used in virtually any proposed or final agency water management action. The science would be evaluated by an Administrative Law Judge (as opposed to a water resource scientist), assisted by a review panel that excludes anyone “directly or indirectly involved with the work…of the agency.”
- This provision would have eliminated deference to the Minnesota Pollution Control Agency’s science when a water quality decision is challenged.
- The proposed action (water quality standard, clean-up plan, etc.) would be void until the re-review was completed.
- Cities challenging the science behind the water quality action would be exempt from paying for it - meaning agency budgets would absorb potentially unlimited re-review costs.

6) Prohibiting agency guidance
Agency guidance, policy, and other interpretations provided are intended to answer common questions, typically from regulated parties, about how the environmental rules and state law would be applied. This provision would have established a presumption that all MPCA and Minnesota Department of Natural Resource guidance documents, policy or interpretation are invalid and un-promulgated “rules” and must undergo rulemaking at public expense. This would make providing basic guidance on environmental regulation much more complex, time-consuming and expensive – the opposite of streamlining.

7) Limiting mining contested case and appeal options
Since 1969 “contested case hearings” have been the right of all citizens, guaranteeing public participation in important decisions that affect the whole state. This bill would have eliminated citizens’ right to contest mining projects, affording it only to adjacent property owners and affected governments.

8) Prohibit rules to limit the use of lead shot
This provision would restrict the DNR from using its existing authority to reduce non-target mortality of birds (including bald eagles) and wildlife exposed to lead shot. Steel shot is readily available, performs similarly as lead, costs the same or less, and is non-toxic to birds and wildlife that ingest it. Modern ballistics have developed many superior ammunition loads and restricting the use of toxic lead shot makes environmental sense and does not impact Second Amendment rights.

9) Banning plastic bag bans
HF888 also sought to pre-emptively prohibit local governments from banning or placing fees on plastic bags. This pre-empts local authority, overrides the will of local voters and bars implementation of a proven method of reducing pollution and protecting habitat.

10) Removing protections for calcareous fens, forcing special permits through state agencies
This provision would have required the DNR to issue a groundwater use permit to irrigators impacting calcareous fens (rare and sensitive groundwater-fed wetland ecosystems) in Pipestone County.
- The forced permit would be good for 15 years, significantly longer than those available to other water users can get. It would be irrevocable in the first five years, and in the next 10 it could only be revoked under unfairly limited circumstances.
- If the DNR did find a reason to revoke this permit, state funds would then pay for the private irrigation equipment already installed.
- After the initial 15-year term, the permit would become irrevocable.

FMR thanks Gov. Mark Dayton for vetoing this unprecedented slate of environmental cuts and rollbacks. We now call on Dayton and legislators to remove bad policy provisions and restore cuts to Minnesota’s environmental agencies.