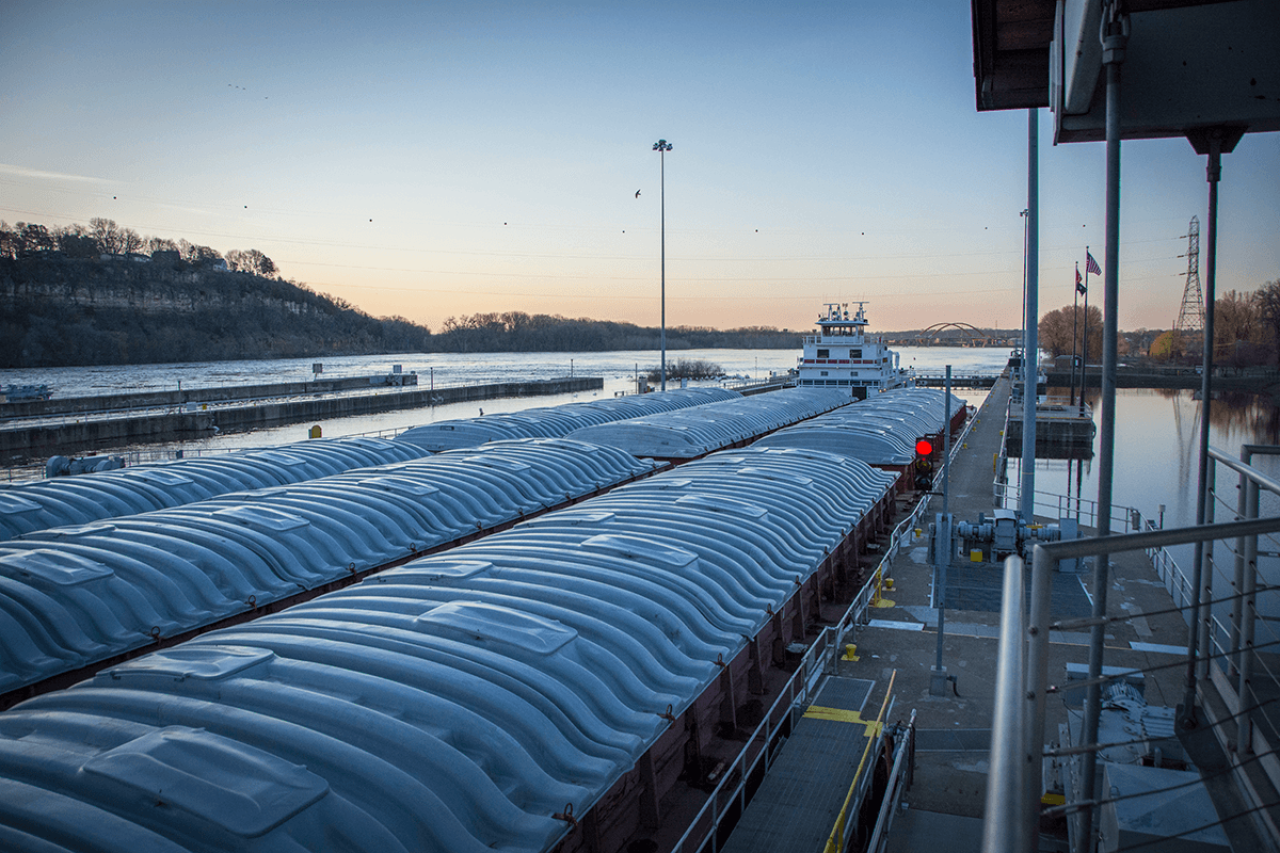 A tow and 12 barges arrive at Lock and Dam 2 in Hastings in April. (Photo by U.S. Army Corps of Engineers)

Our spring edition features thoughtful and moving writing that reflects the passage of time along the river, how past events connect to current times, and ways in which the river remains a wise teacher.

I have been scared of being in the water for most of my life.
Still there are times when the canoe feels too thin a layer of separation,
Tentative at best.

But sitting next to the mni, the water,
I realize this fear is familiar,
And is not the water herself.

I remember, as a young girl, when you kuŋši, were sick.
Preparing for your journey to the spirit world.
But I didn’t understand.

We stood in the hospital,
Light choked by heavy curtains,
The air choked with disinfectant,
Covering what I now know is the smell of death.

I was scared.
I knew it was you, but it didn’t look like you,
Covered in unrecognizable wires and tubes,
Body different than it had been before,
And I was gripped by fear.

I’m realizing the mni of the wakpa,
My relative, the river,
Is so much like you in that moment.
Unrecognizable, swollen in places she shouldn’t be,
Restricted not by wires and tubing, but metal and stone and mechanisms,
Of locking and damming.

The water turned a new color than that which the elders knew,
A color that fills me with dread,
Praying every time that the canoe keeps me from its unknown depths.

She is, like you were, sick.
Chemicals unknown growing inside of her,
Choking the life of her,
And I realize I’m not a little girl anymore.

Part of growing into a Dakota wiŋyaŋ,
Is to have a čaŋte ohitika,
A strong heart.
It means caring for my sick relative,
Loving her all the same,
Bravely sitting by her side, fighting to support her life,
The way she has always supported ours.
Mni wičoni.

The Mississippi River took more than one member of our family through childhood. Mother’s experience of Saint Croix summers spread to me. I remember the day Mother let me try on her pearl ring where it wobbled loosely on my small ring finger while she told me the pearl’s story, how it came from the River clam who had made the pearl from a little piece of sand that he encased in mother of pearl. Mother had collected the clams, of which there were many back then—then dried them in the summer sun. The dead clams opened easily revealing the uniquely-shaped pearls. The children didn’t downgrade their treasures to “slugs.”

I didn’t yet understand that the Saint Croix was soon to reach its mighty destination and become part of the Mississippi.

It was the Mississippi that drew my Davidson ancestors, “The Commodore” and his brother Payton—along with many others, availed themselves of the watery highway, a readymade path to carry profits home. I learned about The Commodore from the painting of the “War Eagle,” a paddle-wheel steam ship that hung above my grandparents’ mantle. It was part of my great grandfather’s fleet of fifty steamships. I also learned of his mixed reputation: “The St. Paul Pioneer Press extolled his latest boat: “Capt. Davidson deserves the united thanks of the citizens …for placing upon our beautiful river so large and elegantly furnished a steamer.”  Flip the coin and he was called “the monopolistic octopus of the upper Mississippi.”

Today many—but still not enough—people have given up the extractionist philosophy in favor of the nurturing care the inhabitants of our planet deserve. As we and our animal cohabiters of Earth deserve clean air, our fish and clam deserve the same.

Beauty in the Mississippi’s Murkiness

When I contemplate the place I call home, I think about bluffs leading to the Mississippi river, elm trees coloring Saint Paul’s landscape and modest Midwestern homes populating city streets.

I fondly recall the simplicity of childhood when my biggest worry was ensuring the baseball cards I’d tap to my bike spokes didn’t falling off before reaching Ramsey Hill. Failure meant, I wouldn’t hear the breezy sound they created as I sped down the steep street, which provided a rush my mundane life didn’t offer.

Never solo, I’d navigate Saint Paul’s crooked streets with a peddle brake biker gang consisting of fifteen friends. We’d take one-ways the wrong way, zip past those beautiful bluffs as we made our way to the river’s edge, while holding onto the hope those cards continued to click against spokes so we could listen to the soundtrack to our youth.

Some summer days, it’d just be me and my two closest friends, Jake and Brady. Always on the shores of the Mississippi, we’d stand in the ankle-deep murky water and watch blends of brown become small swirling swells that traveled within limb-breaking currents towards states to the south of us. Engrossed by the reality we’d never see the same wrinkle of water again, we’d stare at the departing barges. Our minds a mix of curiosity and yearning for more, we’d dream about destinations beyond Middle America.

Write to the River is a creative writing project to inspire artistic engagement with our river environment. We invite you to share an original poem or short prose response to seasonal images along the Upper Mississippi River. Our next seasonal photo prompt and call for creative writing submissions will be in an upcoming issue of our e-newsletter "Mississippi Messages."