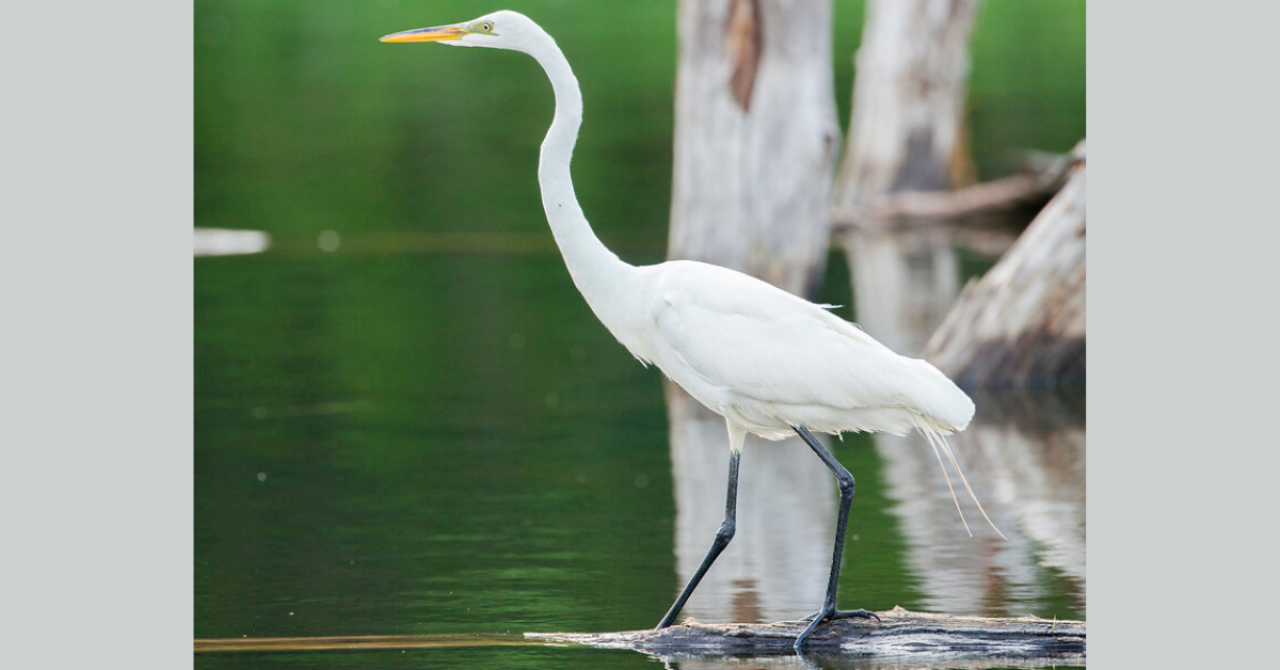 This season's prompt inspired appreciation for the diversity of life along the river and a wide-angle view of our spring environment. Looking up from the river's bottom, across a glassy lake and into childhood memories, the annual return of migrating birds and even mosquitoes is welcomed, as if old friends. We hope you enjoy reading.

It’s you again brother bird
with your sharp beak and unblinking eyes
all mounted at the end of that long neck
cocked back like a spear thrower.

From where I sit the remainder
of your cloud-colored body
is rippled to pieces by the wavelets.

Here on the river bottom I am invisible
if I do not move a muscle, not one blink,
not … one … bubble.

Just take your pointy-head, glass-eyed,
rippling hunger over to those minnows.
I can hold my breath longer than you can.
I did it all winter.

Nestled in the upper Midwest
Where the Canadian geese flock-
An awesome sight to behold
When down the path I walk.

Eager to watch and be noticed
The geese sound their little honks,
Waiting for a hand of corn seed
As residents begin the new day.

Looking out into the scenic lake
I take notice of the silver lining,
Reflected by the sun’s shiny light
Of the mid-morning sky of gray.

The sidewalk path near my car
Was filled with goose droppings,
But beyond that mess I had left
The etched memory in my mind.

There were boyhood summers on the Dakota plains, when my mother would douse me with DEET and insist, to my acrimonious protest, that I wear long sleeves even if the temperature was a sultry 87.  Sometimes, if the mosquitoes were swarming over the porch in the evening, she would forbid me from venturing outside at all.  I would implore my father to free me from this imposed quarantine.  He would sternly shake his head no, explaining that I could get “encephalitis.”
“You could get brain damage!” my mother would scream from the kitchen as if his five-syllable definition was too clinical for me to comprehend.  I’d seen the KELOLAND news.  I knew all about West Nile.  The way she said brain damage you’d think she had just gargled with acid.  For me, being trapped inside my room was tantamount to spiritual death, my precious childhood vanishing like water down a drain.

The tankers trucks rolled by in the quiet afternoons, trailing behind them a sweet cloud of insecticide that smelled oddly like bacon.  It seemed like a bullshit overreaction.  Everyone dies, I thought.  Each summer maybe one kid in the city would die.  But out of 90,000 people, what were the odds it would be me?  Damn small I figured, almost nothing.  But it was hard to argue with “brain damage.”  My blood boiled as I clawed at the circular welts dabbed with pink calamine lotion on my arms and legs.  I stewed in frustration, waiting for the plague to end.

I’ve been angry and depressed lately, mourning the restrictions placed on my daily life by this new plague, the COVID 19 pandemic.  My children’s schools have been closed, perhaps till summer.  This, more than anything, really bothers me.  I am blessed in many ways.  My wife, a teacher herself, can work from home mostly, so childcare should not be much of an issue.  I am grateful for the financial security my job as a letter carrier provides, but I wish I could plan a trip or eat inside a restaurant.  Last weekend I invited a friend over for dinner, but he could not make it because he was self-quarantining after a recent trip to Seattle.  The situation does get suffocating.  I didn’t have to work today.  Normally, I would have the house to myself.  Instead, I tutored my dyslexic son with his handwriting and taught my youngest, such a math whiz, to play poker.  He won all but one hand.  Beginner’s luck as they say.  Towards lunchtime, I let Emily take over the homeschooling and went for a walk in the rain.

I brought along a trash bag and grabber, intending to pick up litter—a hobby of mine when I don’t know what to do with myself, even in a viral pandemic.  I hiked to Minnehaha Falls and, in spite of the early spring, there was still a good amount of ice built up around the generous cascade of water.  The ice was splattered with dirt on the opposite side of the waterfall while the nearside was streaked with a pretty, but unusual, shade of blue that I associated with melting glaciers or mouthwash.  A mammoth hunk of the stuff appeared ready to cleave off at any moment.  I descended a long staircase to where the creek was flowing rapidly.  After placing a few Dairy Queen cups and Pepsi bottles in my sack, I quickly found that the trail, slick with ice and rain, was nearly impossible to walk on.  I fought for traction as I inched along, even using my fragile grabber as a cane to keep from sliding into the churning current.  I’d forgotten how icy this side of the fabled creek always gets and I was damn glad, idiot as I am, that I didn’t have the kids along.

But sure enough, it wasn’t long before I made to a stone footbridge.  The other side was free of ice and there was a lot of trash.  With gloved hands I went to work, feeling like a wet duck in the rain.  Burrs stuck to my sleeves and then to my gloves as I tried in vain to pull them off.  The whole experience had become rather unpleasant.  It wasn’t long before my sack was plum full and too cumbersome to carry much further, so I lugged it up a steep embankment to a waiting dumpster in Wabun Park.  The underbrush on either side of me was strewn with countless beer bottles.  Too much work for any one man or woman, at least for today.  I wondered if the Parks Department ever did cleanups or if the weeds just grew up so you couldn’t see it.  I had done what little I could to cleanse our in-so-many-ways contaminated Earth.  Unburdened by everything except the weight of my melancholy, I followed a gravel trail to the Mississippi River where a pair of guys were fishing.

"Any bites?” I asked from a wooden bridge that spanned the creek mouth.

“Not really.  A couple little pulls."

Then I gazed downstream in silence at a river that, today at least, had no answers.  This was a spot I often fished, either by myself or with the boys.  I’d caught some very respectable walleyes there and the location had inspired some good stories.  It was a place I often went to feel better.

With all the germaphobia going around, you might be asking yourself why I chose to pick up litter on my day off.  The answer, very simply, was that the activity made me feel like I was in control.

Write to the River is a creative writing project inspiring artistic engagement with our river environment. We invite you to share an original poem or short prose response to seasonal images along the Upper Mississippi River.

Get our next seasonal photo prompt and call for creative writing submissions in upcoming issues of our e-newsletter Mississippi Messages.