Have you seen more coyotes and foxes in your neighborhood in recent years? Researchers at the University of Minnesota want to know how wild canids are adapting to urban areas so that we can all better understand these animals and learn to share our metro river habitat. (Photo by Geoffrey Miller for TCCFP)

In the second year of a three-year study, the UMN-led Twin Cities Coyote and Fox Project (TCCFP) is once again gathering reports of fox and coyote sightings from community members in the metro area.

Last year, more than a hundred FMR members and friends stepped up. We're hopeful you'll record your sightings in support of this important project again this fall.

How you can contribute to coyote and fox research

This field season, project researchers are particularly interested in finding red and gray foxes, but all wild canid sightings are valuable.

*This probably goes without saying, but you can rest assured that the animals will not be harmed and will be quickly released after collaring.

Updates from the Twin Cities Coyote and Fox Project so far 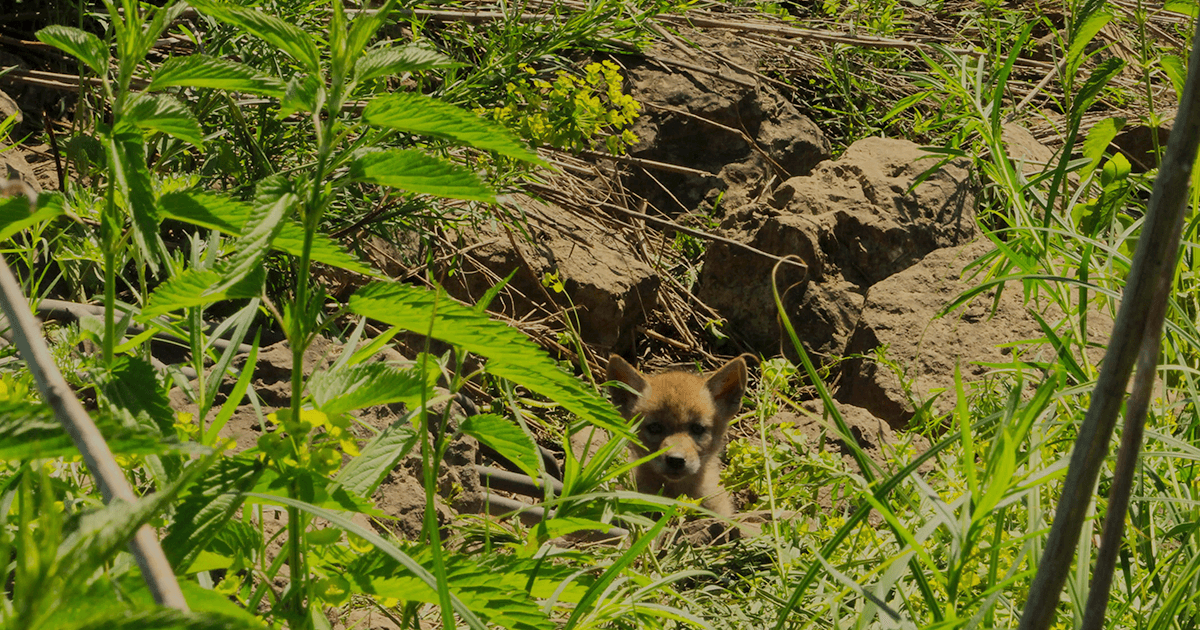 In this photo, a coyote pup pops out of a stormwater outlet used as a den, one of the only spots nearby with vegetation in an industrialized area. The Twin Cities Coyote and Fox Project seeks to understand where wild canids forage, den and travel to minimize potential conflict with humans and our pets. (Photo by Geoffrey Miller for TCCFP)

Last spring, we interviewed TCCFP Project Manager Nick McCann about the first field season for collaring. Nick told us they were able to radio-collar 11 animals last fall and winter, one of which was on an FMR supporter's land. While it's too soon to generalize about their findings, Nick shared that they observed a male coyote travel more than 60 miles to look for a new home range. You can see the map of his journey here.

This summer, TCCFP's graduate student Geoff Miller visited 50 coyote den and rendezvous sites used by seven coyotes in an effort to understand the plants and features that serve as hiding cover. The project will use this information to create maps depicting locations that coyotes are likely to use for den and rendezvous sites around the Twin Cities metro.

Den sites are where pups are born and reared until they're mobile. When pups get a bit bigger and more active, adults will leave them at rendezvous sites while they hunt. Understandably, coyotes are more likely to defend these spots than others they use. Knowing where these sites are could help land managers identify ways to reduce the potential conflict between coyotes and people or pets.

What's the difference between a gray fox, red fox and coyote? 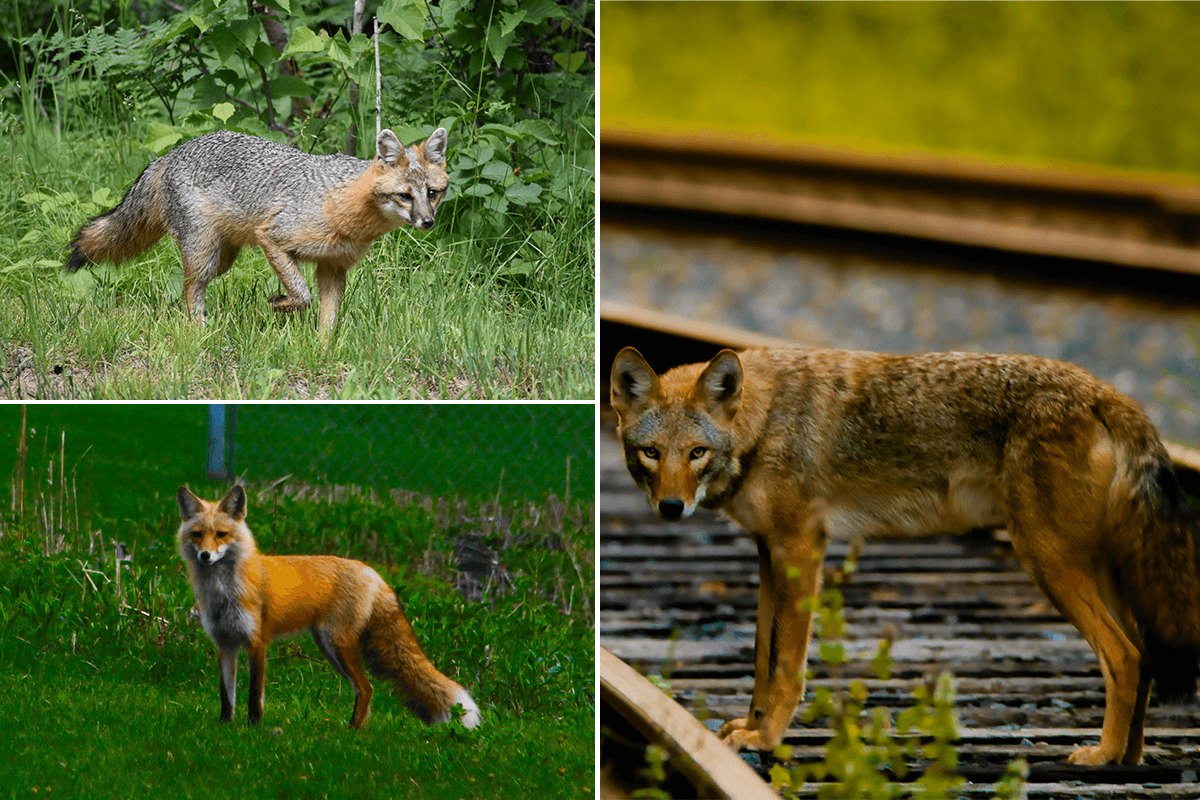 Top left: gray fox; bottom left: red fox; right: coyote. Note how the coyote's face is more like a domesticated dog, while the gray fox's face looks more like a cat. Both foxes are much smaller than coyotes. (Gray fox photo by Tammy Mealman/USFWS; red fox and coyote photos by Geoffrey Miller for TCCFP)

If you can take a photo and include the date and time of the sighting in your TCFCP iNaturalist report, researchers can try to identify the animal.

But this is also a great opportunity to learn about the wild canids that call the Twin Cities home: gray fox, red fox and coyote.

Red foxes do consistently have black legs or feet, though, and a white-tipped tail; while gray foxes' tails are black-tipped.

A coyote is larger and taller than either fox, and its tail is fluffier.

Want to learn more about the project?

We'll also be in touch with FMR research participants who complete the research form to let researchers capture and radio-collar canids on their property. 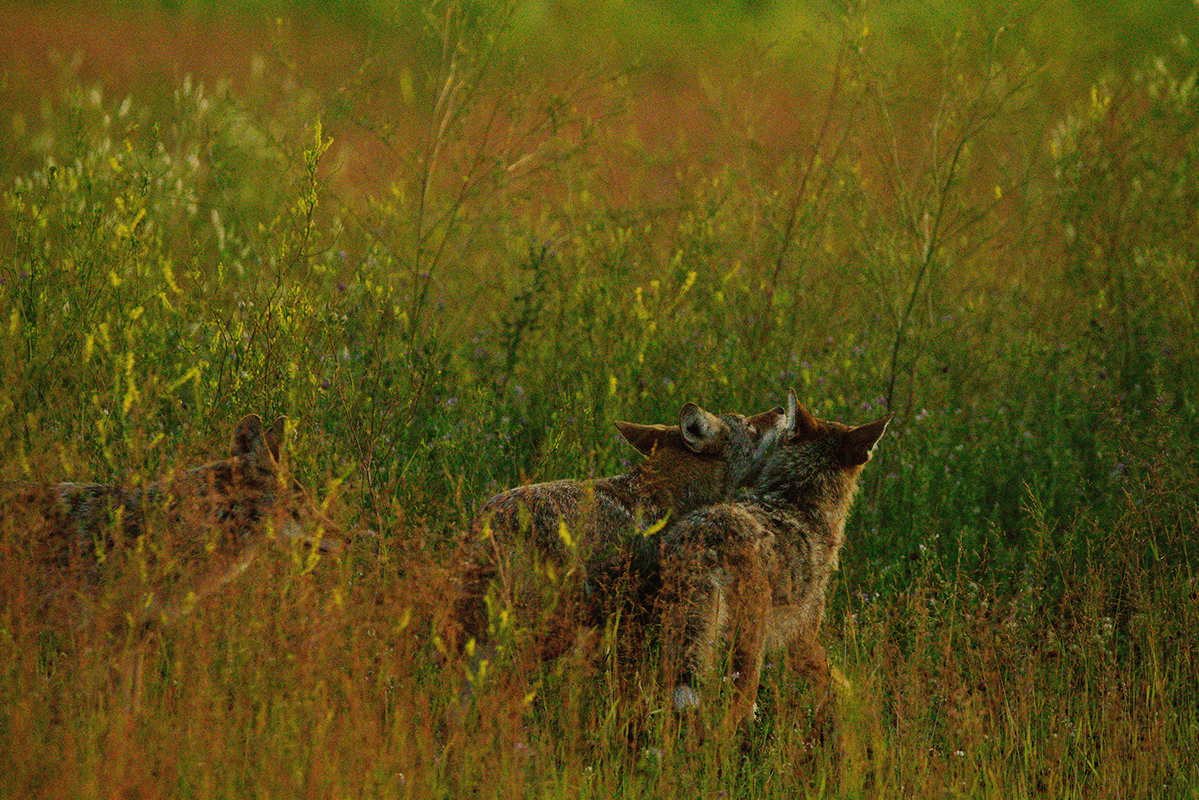 Coyotes greet each other after coming together from opposite sides of a large open area in St. Paul. (Photo by Geoffrey Miller for TCCFP)

Funding for this project was provided by the Minnesota Environment and Natural Resources Trust Fund as recommended by the Legislative-Citizen Commission on Minnesota Resources (LCCMR).