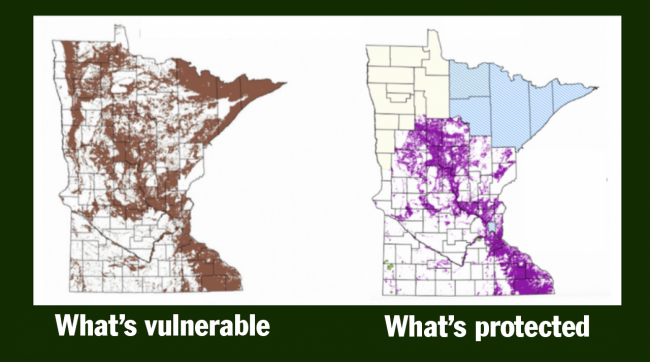 Most, but not all, of Minnesota's most vulnerable soils are better protected now that the state's Groundwater Protection Rule is in full effect. Image: Minnesota Department of Agriculture.

As noted in a recent MPR News story, Minnesota farm operators will no longer be allowed to apply nitrogen fertilizer in the fall or on frozen ground in parts of Minnesota where the groundwater is vulnerable to contamination.

The new requirements, which apply to about 12.6% of Minnesota’s cropland, are part of the state’s groundbreaking Groundwater Protection Rule.

It’s no small problem to solve. Today, at least 537 public water supply wells across the state have elevated nitrate levels. Meanwhile, about 10% of private wells in vulnerable areas are unsafe to drink, including some townships where preliminary data shows that 30% to 40% or more of private wells are contaminated.

That’s why working to improve the rule and ensure it goes into effect has been a priority for FMR in recent years.

How the Groundwater Protection Rule works

Impacts on the river?

While we don’t anticipate surface water improvement from the rule (it's aimed at groundwater after all), it is an important milestone for the state.

As we said in a Star Tribune article last summer, the long-awaited rule is a timid step for water quality, but a giant leap for the Minnesota Department of Agriculture’s willingness to address agricultural fertilizer pollution.

That said, the rule is far from perfect. The part 1 restrictions apply only to areas of the state where few farm operations normally apply fertilizer in the fall. And part 2 regulations can take many years to take full effect, delaying protections for at-risk communities.

FMR and a number of our partners are grateful that the Groundwater Protection Rule is now in effect. However, we also recognize that it isn't enough to protect our water. For that, we need more than best management practices on corn and soybean croplands.

There’s no model that shows we can get anywhere near our state’s water quality goals while growing primarily annual row crops like corn and soybeans. These crops require extensive tillage, drainage and fertilization. Even the best-performing corn and soybean rotation will contribute nitrate to surface water and groundwater.

This is why FMR and our partners are working hard on initiatives to put more economically viable "clean-water crops" on the landscape that protect our land and water while maintaining farm profits and reviving our rural economy.

Thank you to all the River Guardians who took action to support and strengthen the Groundwater Protection Rule while it was under development. Whether you took action online, advocated at the Capitol on Water Action Day (or both!), we greatly appreciate your time and contributions. (All 2,000+ of you.)

Sign up as a River Guardian and we'll email you when there's a chance to act quickly online for the river on issues like this. Plus you'll be invited to special events like educational happy hours.