The paired, bright red berries of bush honeysuckles are easy to spot in the fall. Unfortunately, their beauty belies some serious negative effects on our feathered friends.

When asked to name an invasive plant, I bet most Minnesotans would say buckthorn. This makes sense. It’s more or less everywhere in the Twin Cities and beyond, and many residents have had to deal with it in their yards or on their property. Fewer people would think to mention bush honeysuckle, even though it's a similar invasive shrub.

Both buckthorn and bush honeysuckles were used mainly as hedgerow and ornamental plants. Later on, various bush honeysuckle species were promoted by the USDA for shelterbelts and wildlife habitat. However, they have since escaped cultivation and come to dominate many of our forests and natural areas.

We should note that there is a native bush honeysuckle (Diervilla lonicera), but it's pretty different looking from its showier cousins from across the pond.

Buckthorn and honeysuckle are also both extremely good at out-competing native species and creating headaches for landowners and managers. They germinate well on bare soil and in disturbed sites, they grow faster than many native species (thanks to their high photosynthetic rates), they leaf out early and hold their leaves later than most natives so they end up shading out light-thirsty plants, and their fruits are dispersed by a number of bird species.

This last point is especially important. While other invasive species like zebra mussels depend almost entirely on humans to reach new habitats, and while we likely play a minor role in the continued dispersal of these shrubs, their spread is now largely dependent on our feathered friends.

You may have seen the abundant clusters of dark black berries of buckthorn, or the even more stark bright red (and occasionally yellow) paired berries of honeysuckle. But the beauty of these berries belies some serious negative effects.

The berries of both buckthorn and honeysuckle are lower in protein and energy content, but higher in carbohydrates than those of native shrubs like dogwoods. In the fall, birds need a high-protein diet to create energy stores for the winter. Eating buckthorn and honeysuckle berries provides the opposite and is detrimental to both resident and migrating bird species. Think of it like choosing a sugary snack instead of a healthy, filling alternative.

As the invasive plants dominate the landscape, there are also fewer native plants and berries left for rarer specialist species that rely on them. Rare bird species also avoid invasive shrub thickets, and the lower branches of buckthorn and honeysuckles are also known for increased nest predation. 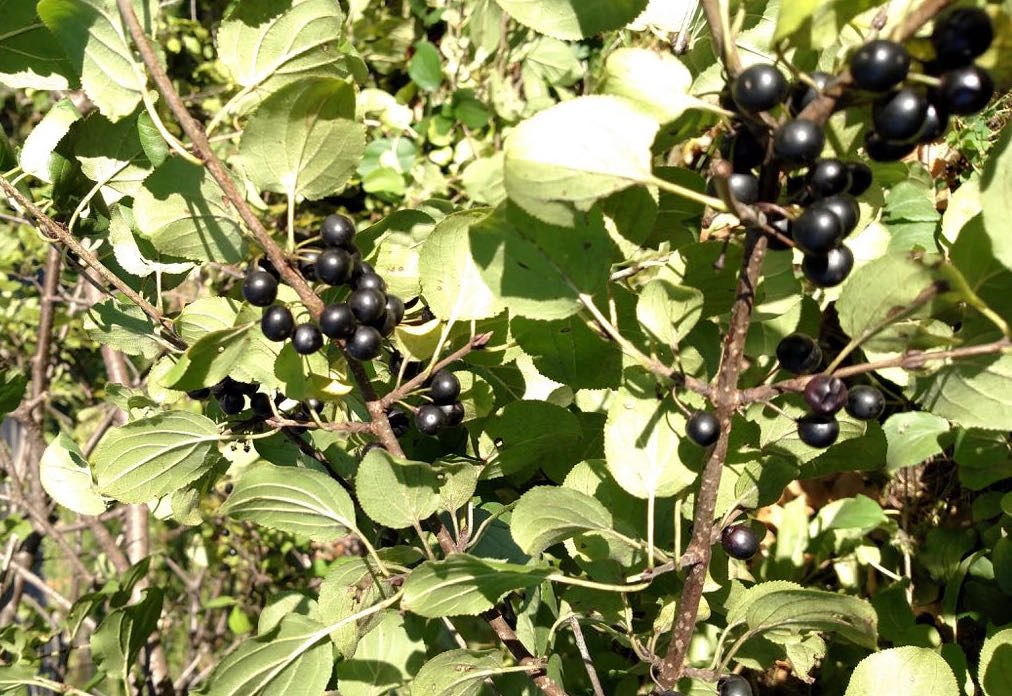 Buckthorn produces dark berries that appear in clusters along the stems.

Colorful birds like cardinals that often eat the berries are negatively affected in an even more indirect (and interesting) way. Honeysuckle berries contain pigments that brighten and redden the colors of birds’ feathers. Color is most often associated with fitness in birds; the brighter or deeper colored they are, the fitter they’re perceived to be. This is because the fittest individuals are the best at acquiring the most food from across the landscape.

We can’t control what birds eat, but we can provide more native choices and fewer invasive ones. Removing honeysuckle and buckthorn and replacing them with native berry-producing shrubs and trees will benefit birds and a whole host of other wildlife species.

So as fall begins and you start to notice those black and red berries in yards and natural areas, feel free to admire their stark colors, but also consider how removing and replacing them with natives will benefit birds and other wildlife. Check out the Minnesota Department of Natural Resources pages on buckthorn and honeysuckle, or see this helpful pamphlet for a list of native species to plant after removal.