Good news, bad news in the fight to stop invasive carp (2015) | Friends of the Mississippi River
Skip to main content 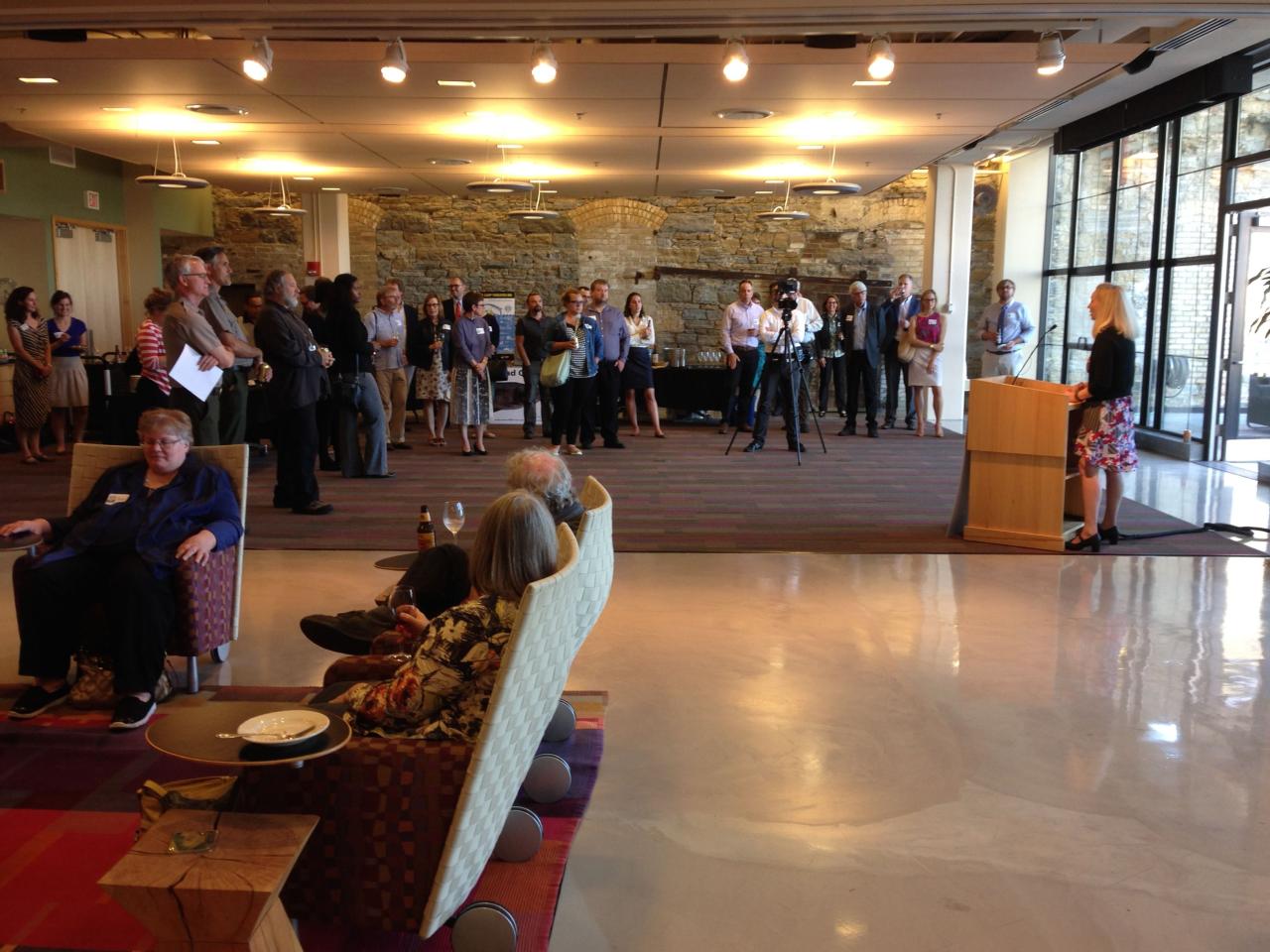 Staff and leaders from the National Park Service, FMR, the Minneapolis Park Board and other allies gathered to celebrate the closure of the lock.

On June 10, 2015 the Upper St. Anthony Falls (USAF) Lock was closed to navigation, marking a major milestone in the effort to prevent invasive carp from infesting northern Minnesota’s treasured lakes and rivers. Meanwhile, five Bighead carp were fished out of the St. Croix near Stillwater, underscoring the need and the urgency to continue looking for effective solutions downstream.

First, the bad news. It’s that time of year again when invasive carp start showing up where they are not welcome. This time the catch was further upstream than any found to date in Minnesota – five Bighead carp were found over the course of a few days in the St. Croix River near Stillwater. Beginning in 1996, Bighead carp have been found occasionally in the St. Croix, but this catch more than doubles the total number of fish found in two decades. Both the upstream location and the quantity of fish caught raise the level of concern for the St. Croix, but DNR officials do not think there is a breeding population there yet. Efforts are being studied to deter invasive carp at Lock #8 which could slow the spread to the St. Croix and Minnesota Rivers as well as other important tributaries in southeastern Minnesota and Wisconsin.

Now, the good news. Now that the USAF Lock is officially closed, Minnesotans can breathe a sigh of relief to know that the Mississippi River upstream of Minneapolis is more protected from invasive carp. The threat to the treasured lakes and steams of the Mississippi watershed has been lifted, and the future of the towns that depend on the health of these waters to support their local economies is now brighter.

When the Stop Carp Coalition formed three years ago, we identified lock closure as a very simple and inexpensive solution to stop the upstream migration of invasive carp in the Mississippi River. The path to closure, however, was extremely complicated, as it required an Act of Congress that could rile the powerful agriculture lobby. Most people thought we did not stand a chance.

But thanks to the leadership of Sen. Amy Klobuchar and Rep. Keith Ellison, lock closure worked its way through the convoluted process of lawmaking and emerged intact as part of the vast Water Resources Reinvestment and Development Act that passed in June 2014. Before this idea could be sold on Capitol Hill, Minnesota stakeholders had to be convinced the economic benefits of stopping the carp far outweighed the impacts to industrial and recreational lock users. The Stop Carp Coalition and its members advocated tirelessly for this with state and local leaders, river user groups and the general public. The Governor and Minnesota DNR joined the campaign early on by including lock closure in the state’s Invasive Carp Action Plan. The Minneapolis Park Board took action to ensure the pleasure boats operating from their land agreed to stop using the lock, and the City voted to permanently close the Port of Minneapolis, also known as the Upper Harbor Terminal, one of three industrial docks upstream of the closed lock.

A few days before the last boat passed through the lock, the Stop Carp Coalition and friends gathered at the McKnight Foundation’s office overlooking St. Anthony Falls to celebrate a new era for the Mississippi River in Minneapolis and points north. Christine Goepfert of the National Parks Conservation Association kicked off a lineup of short speeches by recounting the effort and thanking everyone for their part in achieving what once seemed unlikely if not impossible. As one speaker pointed out, “This is a really big deal!”

Then we raised a glass, had some cake and then got back to work on stopping the carp invasion.

Recent coverage of the lock closure and bighead catch: