Reconnecting North Mpls to its riverfront 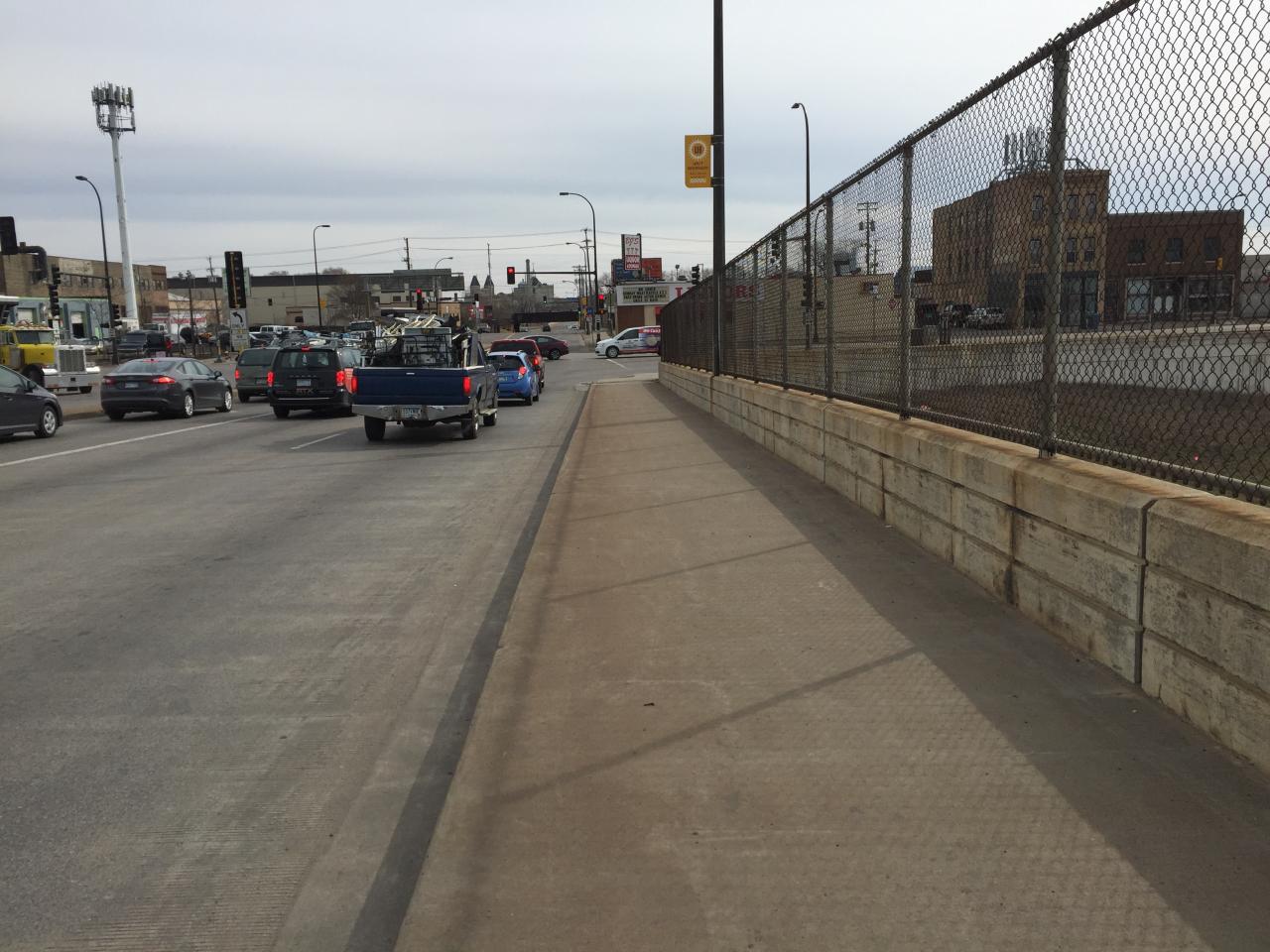 For many Northsiders, this is the path to the Mississippi River: the West Broadway bridge over Interstate-94. Improvements like a barrier separating the sidewalk from cars, a safe biking space, updating the chainlink fence and adding greenery or art would make this a far more welcoming route for pedestrians and bicyclists traveling to the river.

FMR has long advocated for a greener, more accessible North and Northeast Minneapolis riverfront, traditionally known for more industrial use. With neighborhood river advocates and allies, FMR staff have helped ensure that plans for the stretch between St. Anthony Falls and the northern edge of Minneapolis, the "Above the Falls" riverfront, call for a ribbon of parks and trails akin to those lining the riverfront elsewhere in the city. While the award-winning Above the Falls Master Plan has been in place since 2000, momentum for these changes has really picked up in the last year.

June 2015, FMR and our allies celebrated the closure of the Upper St. Anthony Falls Lock, as it effectively created a barrier to keep invasive Asian carp from invading upstream. The closure of the lock, however, also eliminated barging as a means of transport for several North and Northeast riverfront industries. Now, a year later, we're seeing businesses and landowners becoming more interested and willing to sell their land to the Minneapolis Park and Recreation Board. Currently, over half of the Above the Falls riverfront is publicly owned, making it possible for its transformation to proceed at a relatively fast pace.

Naturally, FMR is excited to see momentum picking up on these long-sought riverfront changes. However, most North Minneapolis residential areas have been cut off from the Mississippi River by Interstate 94, and residents face significant barriers when trying to walk or bike to the river. As the riverfront transitions, FMR is working to ensure that the wonderful new riverfront parks and trails being developed here will be welcoming and accessible to everyone, especially local residents.

In January 2016, FMR welcomed U of M graduate student and Northsider Eric King as a research assistant through the Center for Urban and Regional Affairs (CURA). Throughout spring semester, Eric gathered more information about barriers to river access as well as potential ways to overcome them. He reviewed various existing plans for the area and collected additional information with board members of local neighborhood groups.

Recently, Eric completed his report, which lists both the obvious barriers — Interstate 94, railroad crossings, poor pedestrian and bike infrastructure — and lesser-known obstacles such as high levels of air pollution and lack of transit. The report also provides case studies where other communities have creatively overcome similar barriers. (See FMR's summary for more information.) Eric also created an online interactive map that provides a plethora of information about the planning work that has been done for various Northside areas.

Eric and FMR will be sharing his findings with community groups and city planners, using them to facilitate further discussion and guide next steps. We've also created a survey to help us refine the results, which can be taken online or at one of several community celebrations this summer.

Our first public presentation was July 13 at the McKnight Foundation in downtown Minneapolis. After Eric presented his research, we discussed existing barriers and opportunities as well as projects that are in the works to improve them. The majority of attendees were positive about the idea of more physical connections between Northside residential areas and the North riverfront, however many were also concerned that air quality issues, frequently attributed to Northern Metals, were more urgent, and also wanted to be sure potential gentrification would be mitigated and displacement minimized.

This summer, Eric will also be at Northside community events seeking feedback and additional input.

While in the office this summer, Eric will review each site being considered for improvement to see which are also on lists to be redeveloped and which entities and landowners have jurisdiction over them. All information gathered will guide our 2017 connections work to make the river more accessible to Northsiders.

If you live, work or recreate in North Minneapolis and would like to be contacted about future presentations or related efforts, please contact FMR River Advocate Alicia Uzarek, auzarek@fmr.org.