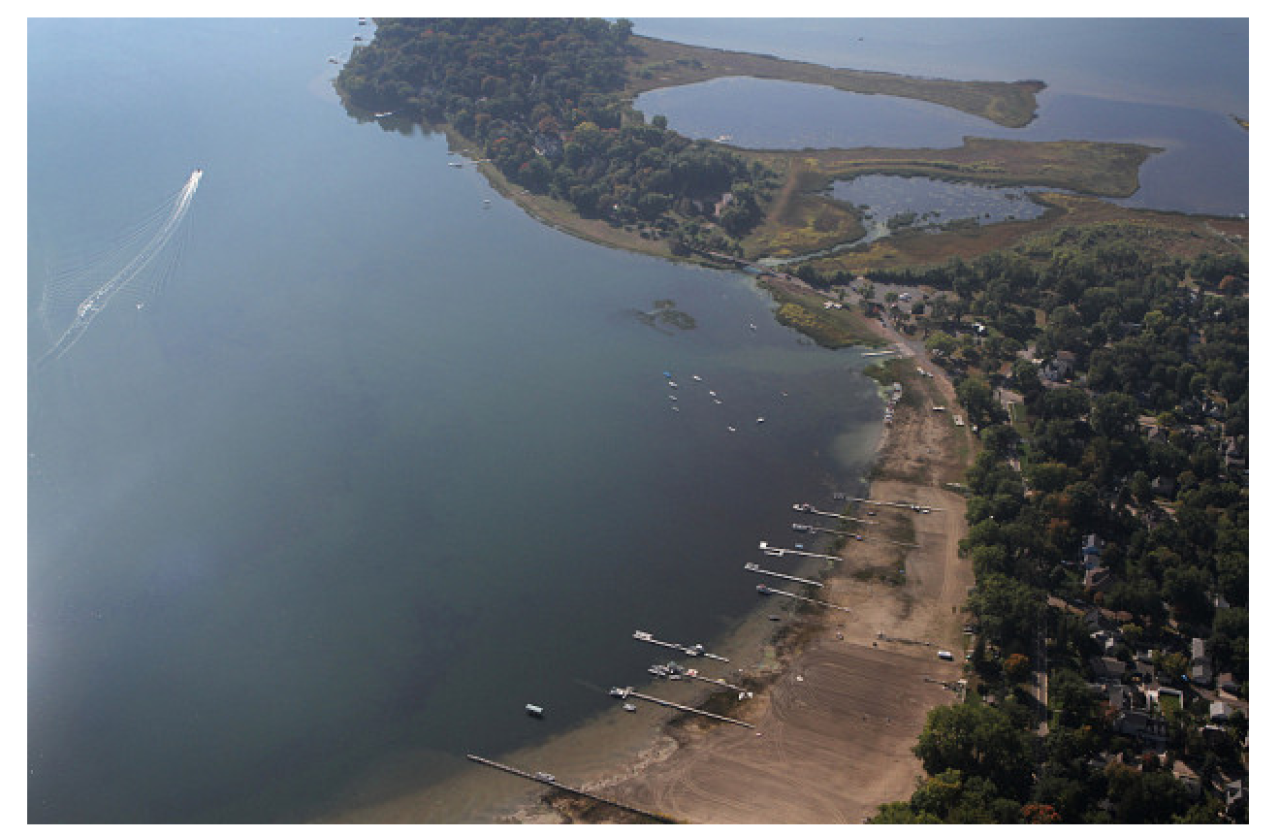 In a sweeping order, Ramsey County Judge Margaret Marrinan faulted the Minnesota Department of Natural Resources (DNR) for authorizing unsustainable groundwater pumping; depleting the aquifer and artificially lowering water levels in White Bear Lake. The ruling could have widespread implications for groundwater management in Minnesota. Overall, we see it as a potentially significant step towards sustainable water supply planning.

Located about 10 miles north and east of St. Paul, White Bear Lake straddles Washington and Ramsey counties. At 2,400 acres, it's the second largest lake in the metro area. While the lake's water levels are notoriously unstable, recent years have seen steep declines. Over the past decade, the lake has lost more than a quarter of its water volume according to a report from the Freshwater Society.

As FMR previously noted in a feature article on this topic, the consequences go beyond disappointed boaters, anglers, swimmers and beachcombers; homeowners around the lake have seen their property values plunge as much as 40 percent.

Excessive groundwater pumping not only lowers the water level of the aquifer but the water levels of White Bear Lake. The aquifer and lake rise and fall together – and both have been falling due to excessive pumping.

In fact, water is being pulled out of White Bear Lake and into the aquifer below before being pumped to the surface through nearby wells. Isotope analysis suggests that of the 40 wells tested near the lake, 31 include a mix of groundwater and surface water. Water in the 11 wells south and southwest of the lake contain between 13 and 58 percent surface water, most likely from White Bear Lake.

So while the lake has a small watershed as well as historically variable water levels, the ruling makes it clear that excessive groundwater pumping is the driving factor in the long-term water level drop.

Diamonds (and water permits) are forever

Anyone wishing to draw more than 10,000 gallons per day or 1,000,000 gallons per year from groundwater must seek a permit from the Department of Natural Resources. While the agency has at times failed to monitor well users, and some users cheat, the DNR’s groundwater permits are “evergreen” and do not include an expiration date. The ruling cites several municipal water permits in the White Bear Lake area that have no expiration date.

Not surprisingly, well users continue to draw more and more water from aquifers with little to no accountability. Excessive summer usage is especially problematic. Met Council data shows that summer water use in the 1990s was about 1.6 times winter water use. However, summer use is now about 2.4 times greater than winter use on average — due largely to irrigation, such as watering lawns.

With more than 70 percent of the metro region’s water supply coming from groundwater securing a sustainable water supply is vital to our regional environmental and economic security. While FMR has long advocated for a mix of improved water conservation measures and a more sustainable water supply plan in the northeast metro (in part to ease pressure on White Bear Lake), little progress has been made on that front to date. This ruling likely presents the opportunity for real progress.

Without a doubt, the ruling faults the DNR for exacerbating already unstable White Bear Lake water levels by ignoring the cumulative impacts of excessive groundwater withdrawal. In order to restore the aquifer and the lake, Judge Marrinan has prohibited the DNR from issuing new or increased groundwater withdrawal permits within a 5-mile radius of the lake until the agency has taken the following steps:

The ruling also affirms FMR’s longstanding position regarding a shortsighted effort to pump water from the Mississippi River and pipe it into White Bear Lake. The ruling deemed this so-called augmentation approach to be a “risky, expensive and ineffective approach to restoring surface water in the lake” for several reasons:

FMR’s own Trevor Russell (White Bear Press) and Whitey Clark (Pioneer Press), along with editorials from other local media outlets have panned the augmentation scheme as an unwise and ineffective use of taxpayer dollars — a conclusion firmly supported by the judge’s ruling.

Any decisions about the future of our groundwater and drinking water supply must be guided by the principle of sustainability, which means meeting the needs of the present without compromising the ability of future generations to meet their own needs.

That’s the essence of stewardship.

FMR has long advocated for a more sustainable drinking water approach for the northeast metro. A 2014 Metropolitan Council Report evaluated the feasibility of different approaches to restoring the aquifer that supplies drinking water to the area as well as supporting water levels in area lakes, including White Bear. That report looks at three sustainable solutions for providing long-term water supply to the northeast metro area.

Will the DNR appeal?

The DNR has not yet indicated whether or not it plans to appeal this ruling.

Judge Margaret Marrinan’s ruling is a victory for sustainable water supply planning in Minnesota. The ruling makes it clear that by ignoring the cumulative impacts of excessive groundwater withdrawal, the state has violated the law and must take corrective action to protect aquifers, surface waters, and local communities.

We look forward to working with state agencies and local stakeholders to establish a more protective and sustainable groundwater permitting approach in the years to come.