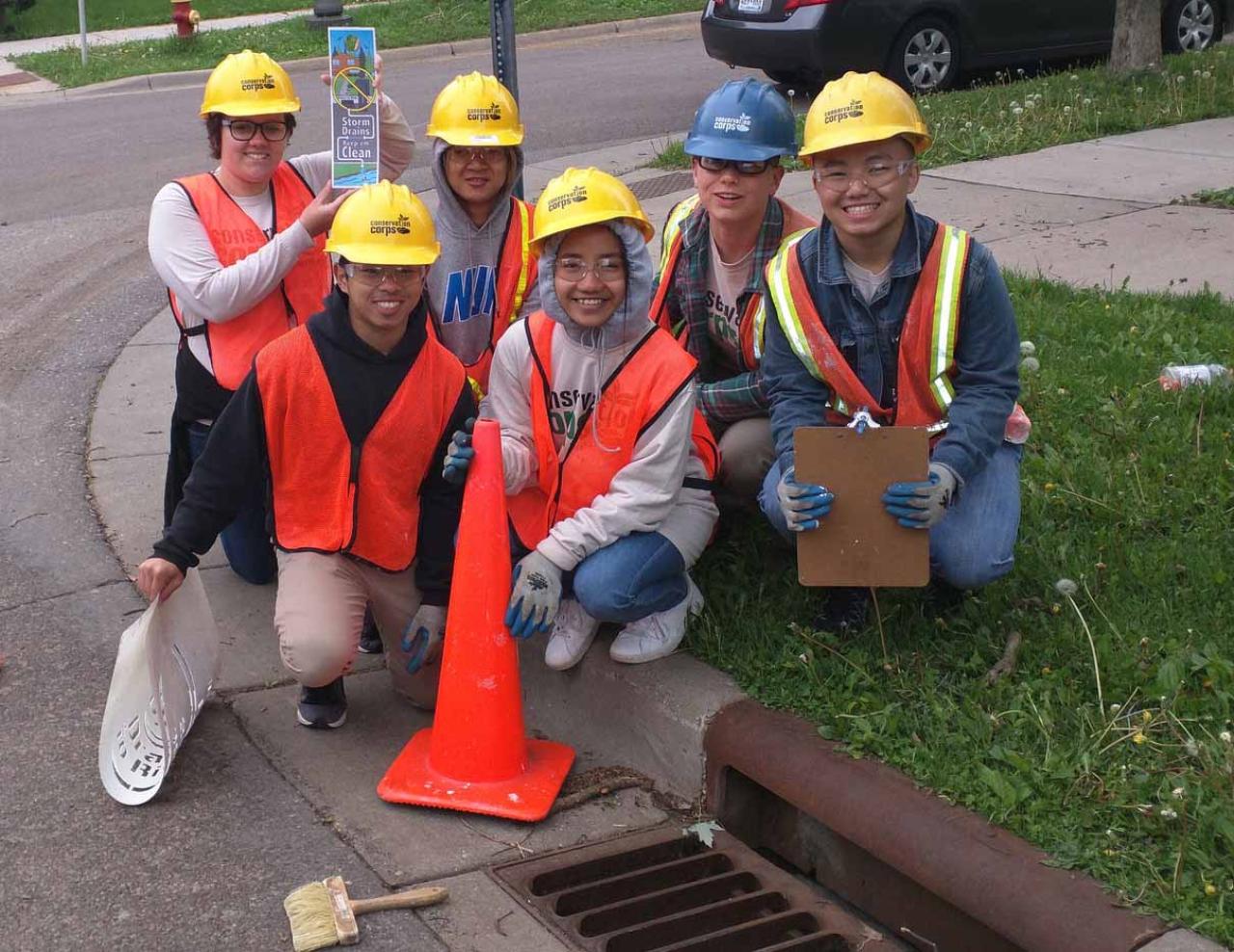 Members of the Youth Conservation Corps, one of 56 groups who helped stencil storm drains in St. Paul and Minneapolis with educational messages about how they connect to the Mississippi River.

A giant thank you to all the young river stewards who helped us protect and restore the Mighty Mississippi this year!

Young FMR volunteers stenciled over 2,000 storm drains with educational messages, distributed over 7,000 related educational flyers, collected trash throughout Twin Cities parks, and helped not only restore habitat along the river but research the best ways to keep it healthy in the future.

Stenciling messages next to storm drains is an effective way to spread the message that they directly connect to the river. Seeing "Keep 'em clean, Drains to river" painted on our street corners reminds us all that there is no magic filtration system — whatever we see along the curb, gutter or side of the road gets carried into the river when it rains.

Road salt and cigarette butts are some of the worst pollutants, but there are also leaves, grass, fertilizers, pesticides, oil, gas, paint, antifreeze, and everyday trash to contend with. As volunteers stencil storm drains, they also clean the area around them and distribute flyers to nearby homes and businesses full of pollution-reduction tips.

This year 1,146 people in 56 groups — mostly from schools and youth organizations, along with a handful of corporations, churches and neighborhood clubs — helped us exceed our storm drain stenciling goals. We were also excited to see more and more smaller groups taking advantage of our check-out kit to stencil drains at times that worked best for them.

Altogether we stenciled and cleaned up around 2,800 storm drains and distributed 7,484 educational flyers! 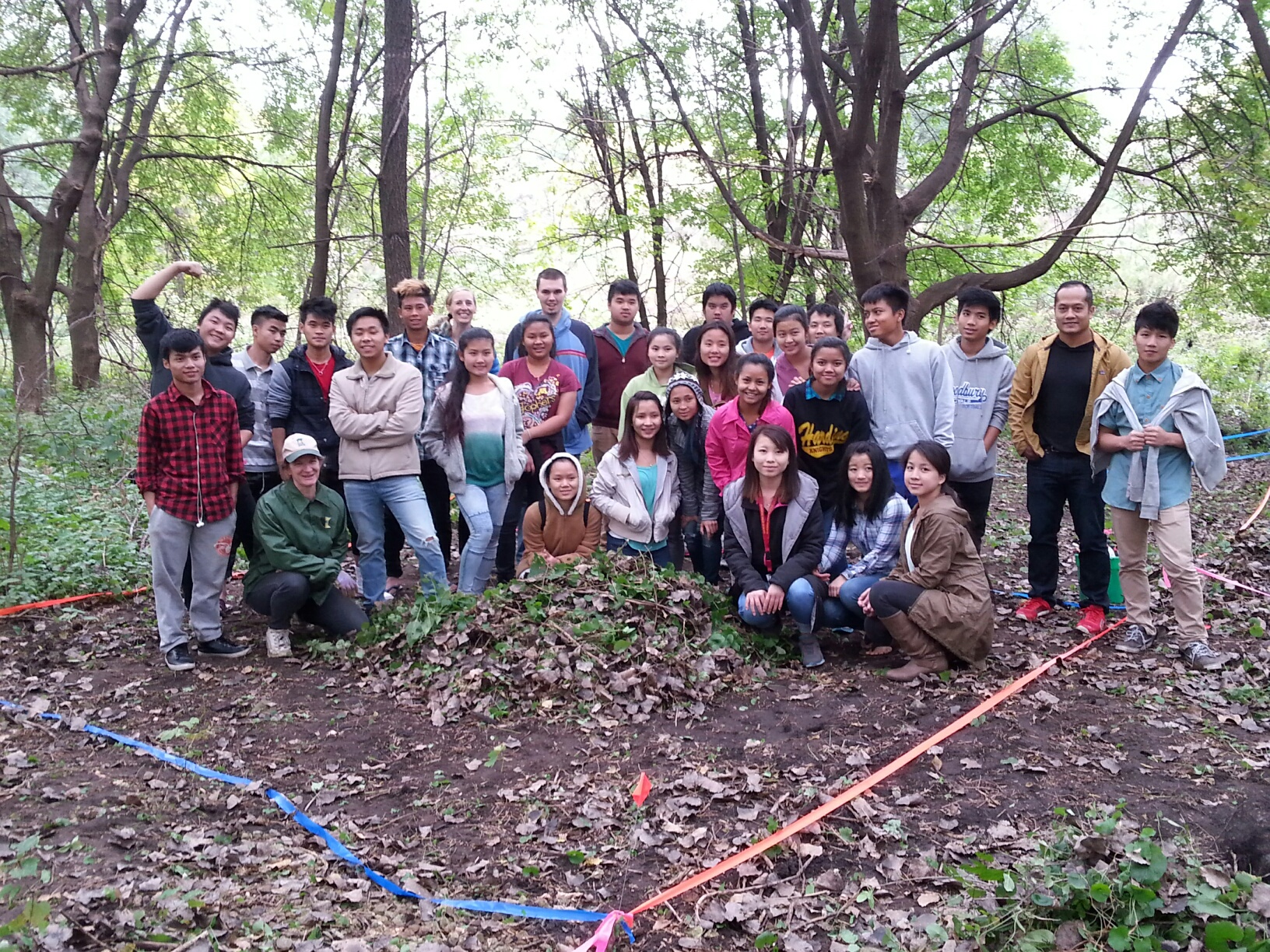 As many FMR supporters are aware, invasive plants have drastically changed Minnesota's landscape.

This year, over 370 students from 13 schools tackled areas of Twin Cities forests, prairies and riverfront parks affected by the two most common invasives: garlic mustard and buckthorn (both of which come from Europe).

Spring was garlic mustard removal season. For the second year in a row, students from Andersen United's 5th grade in Minneapolis topped the charts with 15+ bags of garlic mustard removed from the river gorge, but St. Paul's Harding High Earth Club also shares top honors for enduring a downpour as they cleared a garlic mustard patch.

In the fall, we switched to buckthorn removal. Students from St. Paul's Battle Creek Middle School cleared a large area of well-established buckthorn near their school (located on the creek that connects to the river).

While it may sound like nothing more than "pulling weeds" to some, the students understood how their contributions improved habitat by allowing the native plants that birds, bees and other urban wildlife need to survive. Besides, one Battle Creek student noted, being outside cutting buckthorn is more fun than being on the playground.

Many of these groups return to a site year after year to help prevent the invasives from regrowing. Some also help monitor the plant and animal species to see how "their" restoration area is doing and help FMR ecologists refine our restoration efforts. (Check out this Hmong Times profile of our young Harding High researchers and river restorers!)

FMR helped organize cleanups in St. Paul and Minneapolis for six youth groups. (These were in addition to our annual, public Earth Day cleanups.)

Over 150 young people came from a variety of backgrounds to help remove litter that would otherwise reach the river — including some Boy and Girl Scout troops and classrooms. One particularly brave group of 3rd and 4th graders from St. Marks Catholic School were determined enough to be out in the snow picking up the wrappers left by trick-or-treaters. They found an impressive amount of trash under the leaves and snow, and serve as a good reminder why picking up trash isn't just an Earth Day activity.

While we always enjoy going outside, FMR spends plenty of time in classrooms, too. So far in 2017, we've engaged over 510 students in indoor programs about watersheds, wetlands, invasive species and erosion.

Many of the students are with groups that also stencil, clean up trash or help restore habitat.

Even though the outdoor event season is over if you'd like to connect about an indoor program for a classroom or youth group, let us know! Most programs are 1-hour long and include a hands-on activity. To learn more, check out our menu of offerings, or contact FMR Youth Coordinator Kate Clayton at kclayton@fmr.org