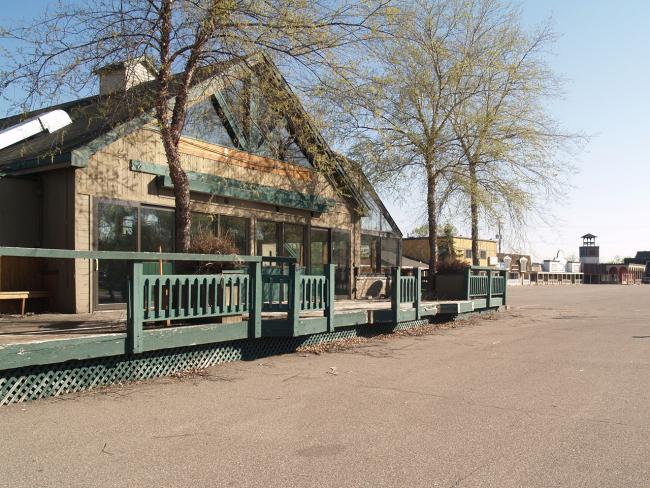 The city of Lilydale is considering a new development proposal for a large building on top of a delicate Mississippi River bluff. After reviewing the developer's plans and meeting with city staff and elected officials, FMR has significant objections to this project as it would damage delicate bluff ecosystems, harm the river's scenic beauty and violate important zoning rules.

The site is near the intersection of Highway 13 and Lilydale Road just east of Interstate 35E. It's fairly narrow, bounded by the edge of the bluff on one side and the highway on the other.

According to the concept plans provided by the developer, Opus, the River Bluffs Senior Housing development would provide 151 units of market-rate senior housing (a mix of independent living, assisted living and memory care) along with resident amenities such as a restaurant and community spaces. There would be 153 parking spots (80 in a surface lot and 73 in a first-floor garage). 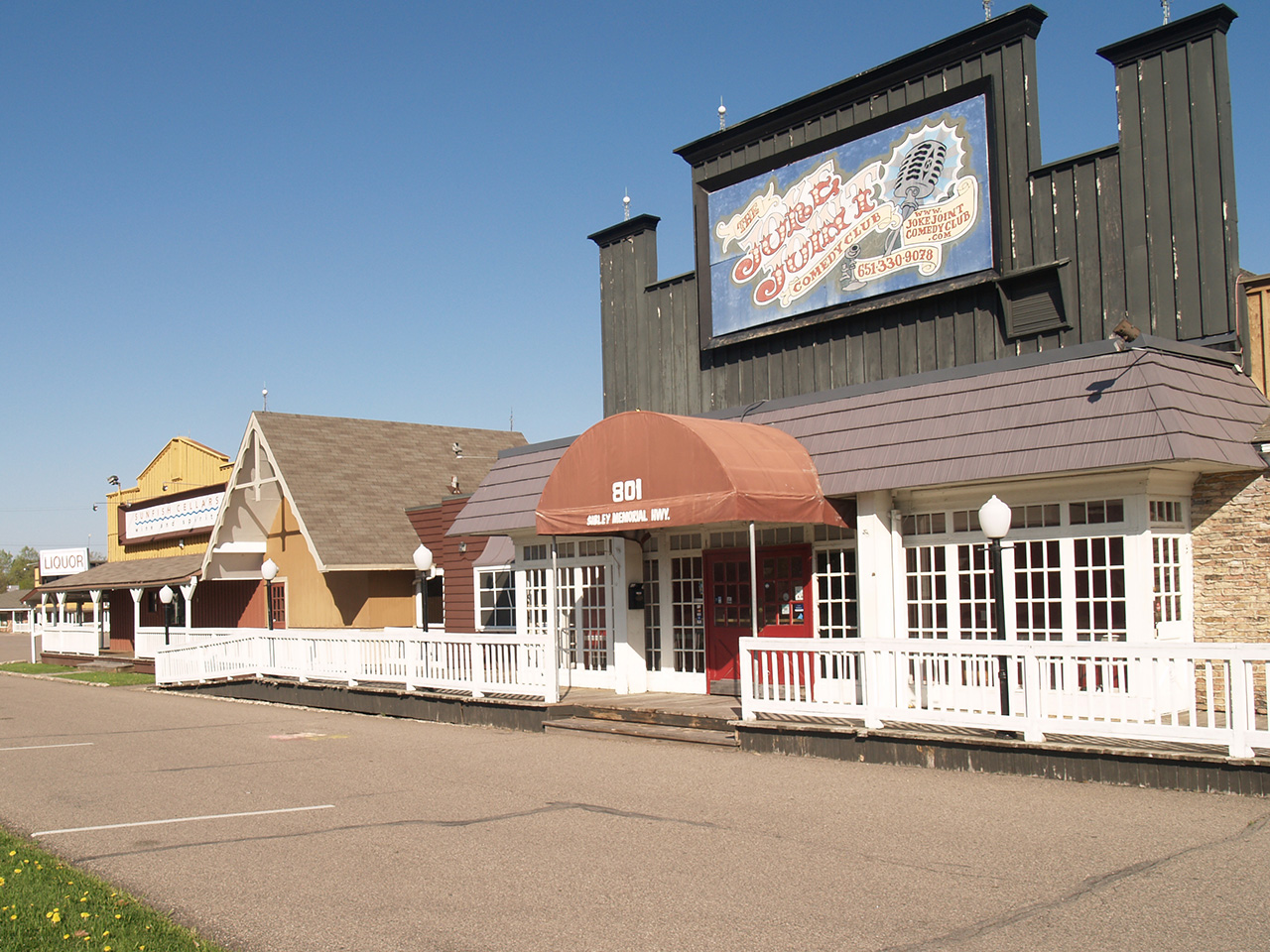 Existing buildings on the site, the former River Bluffs Center, were home to Moose Country restaurant and bar as well as several smaller storefronts before the center closed in late 2018. These structures are right on the edge of the river bluff. Significant erosion has even left portions of the buildings suspended over the edge.

This aerial video of the site shows just how close to the edge of the bluff these buildings remain.

FMR strongly supports the removal of these structures and encourages the city to require site developers to use a demolition firm with expertise working on bluffs or other delicate settings.

The proposed structure is 56 feet high. Lilydale's zoning code sets the height limit for the site at 35 feet, with an opportunity to increase height to a maximum of 50 feet by gaining city approval for a conditional use permit or Planned Unit Development (PUD).

Approval for a permit or PUD requires that the aesthetic of the river environment and important scenic values be maintained through vegetative screening, the preservation of existing natural vegetation, additional landscaping, buffering, revegetation and increased setbacks.

But the concept plans show neither such mitigation measures nor increased setbacks. Instead of significant vegetative screening or landscaping along the bluff-line, plans show paved walking paths and patios. And in addition to exceeding the zoning code's height limit, Opus seeks to reduce the setback or distance between the buildings and the bluff's edge.

The developer's own view analysis shows a large structure clearly visible from the river, higher than the surrounding tree line.

This photo shows the development site as it exists today. The current structures are one or two stories high and are not very visible behind the trees. (The Pool and Yacht Club is pictured in the foreground.)

The structure would encroach on the bluff, marring both views and delicate landscape.

The proposed development violates these ordinances, with both the building and its parking lot encroaching on the required setback in several spots. In places, a five-story, 56-foot high building facade will be just 18 feet from the river bluff, and the parking lot just 14 feet from the bluff. This encroachment exacerbates the visual impacts of building's excessive height. It also places the bluff at risk of further erosion and degradation.

The River Bluffs Center site is unique and delicate. Development here should respect the city's height and setback requirements, respect the site's presence in a national park and respect the residents and community members who spoke up to preserve and protect our metro river corridor.

The Mississippi River bluffs are a tremendous scenic asset. They provide river visitors with the sense of being in a natural place within an urban area. The zoning codes and critical area rules that guide riverfront development in a way that protects the river were created through years-long stakeholder engagement processes. That public input should be honored.

The river bluff in and around Lilydale is also very fragile. Several landslides have occurred in the area over the years (for example, in 2013, 2014 and 2018).

Many aspects of development and construction can damage bluffs, including altering land, building structures and roads, removing or limiting native vegetation and improperly managing stormwater runoff. As climate change brings about more extreme and frequent weather events, rainfall and other factors could accelerate bluff erosion.

Each erosion incident brings structures closer to the bluff's edge. Betting on the long-term stability of a bluff puts delicate ecosystems in peril, and it's also a risky liability for any property developer or owner.

If you care about protecting the river, its bluffs and its scenic views, you can share your concerns with the Lilydale City Council about this proposed development via e-mail or mail (1011 Sibley Memorial Hwy., Lilydale, MN 55118).

The planning commission will discuss the developer's concept plan at their May 22 meeting and the city council will hold a public hearing and a vote at their June 10 meeting. Community members who live in Lilydale and/or near the site are especially encouraged to speak at the hearing.

If you have any questions or would like to be further involved, contact Irene Jones at ijones@fmr.org.

At its May 22 meeting, the Lilydale planning commission expressed support for the senior housing concept but voiced several reservations about the building's height, bluff and highway setbacks, and stormwater management plan. The development team agreed to present a revised concept plan at the next planning commission meeting, June 12.

The Lilydale planning commission reviewed Opus' new plan, which substantially reduces bluff encroachment. Some encroachment into the 40-foot setback is still anticipated in small areas, primarily on cantilevered patios that will not require a foundation to be placed in the bluff setback zone. The building design is now also tiered away from the river to reduce the scenic impacts of excessive height.

FMR supports these changes. Like many community members, we remain concerned about plans for stormwater management, but the city and development team have both expressed a strong commitment to collaborating to improve this aspect of the plan.

The planning commission recommended the concept pan with stipulations around resolving stormwater management issues and easement negotiations with neighboring property owners. The city council will hold a public hearing and vote June 25 at 4:30 p.m. Residents of Lilydale and neighbors of the site are encouraged to share their feedback about the importance of protecting the river bluff as the planning process continues.

Contact Irene Jones at ijones@fmr.org if you'd like us to keep you informed about the meeting dates (they sometimes change). Meetings will also be announced on Lilydale's website.