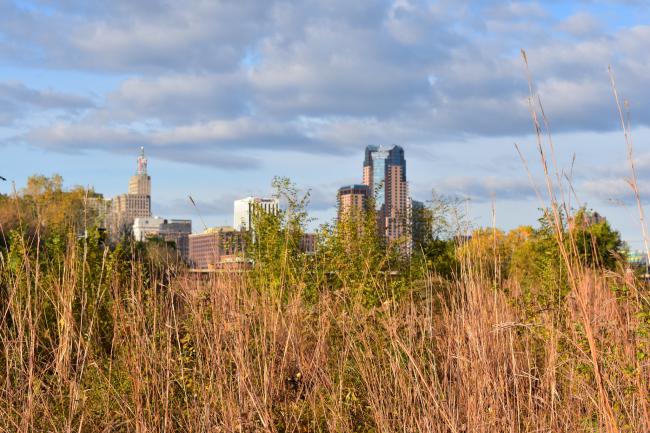 Bruce Vento Nature Sanctuary is one example of how former industrial sites can be transformed into natural spaces for recreation and wildlife, ensuring access to the river for all community members, not just wealthy or white communities.

In what's become a friendly rivalry between St. Paul and Minneapolis, the Trust for Public Land's recent rankings of the country's best park systems put the two cities in second and third place, respectively.

The report assesses park systems based on how many residents live within a 10-minute walk of a park, and those parks' size, amenities and funding. Minneapolis and St. Paul both consistently rank near the top of the annual list. Last year, Minneapolis won the top ranking, and St. Paul came in third.

We're proud of the hand FMR has played in locking in park access over the years. This year's addition of a new equity metric provides an opportunity to assess park progress in a more nuanced way.

New this year: a focus on equity

Along with their standard metrics of access, investment, acreage and amenities, The Trust for Public Land also included a metric for equity in their 2021 ParkScore rankings. They measured equity by how well park space is distributed across a city: Are there an equal number of park acres in low-income neighborhoods as in wealthy ones? How about in majority-white neighborhoods versus neighborhoods where most residents identify as people of color?

While both cities should be proud of their world-class park systems, we should all feel a sense of responsibility for these significant disparities. No city is great until it's great for every resident.

Of equal importance, but not addressed in the park rankings, is how well park funds and amenities are distributed across a city. For instance, the Minneapolis Park and Recreation Board has openly acknowledged that wealthier and whiter areas have historically drawn more than their share of investment in maintenance, amenities and programming. In an effort to reverse these disparities, the park board now uses racial and economic equity data to guide its capital improvement and recreation plans.

Of course, we also can't ignore the role that parks play in creating wealthy neighborhoods. Green space and recreational amenities can drive gentrification and displacement. Investing in parks alone won't resolve disparities; we also need to be careful to create affordable living and a range of housing opportunities in every corner of our community.

Connections to the river

In Minneapolis and St. Paul, many of the neighborhoods that experience disproportionately low park access are also cut off from the Mississippi River. In Minneapolis, FMR has long prioritized its work in the Above the Falls area of North and Northeast Minneapolis. These neighborhoods have lived with an industrialized riverfront occupied by companies who continue to pollute the air, land and water.

FMR actively advocates for new parks and community-centered development that restore public river access, hold polluters accountable, and create opportunities for residents, particularly in North Minneapolis, to enjoy the Mississippi River. The fruits of this work can be seen at places like Ole Olson Park. We're also advocating for resident-centered redevelopment at the nearby Upper Harbor Terminal site.

St. Paul's East Side is another neighborhood whose riverfront is dominated by heavy industry rather than the parks and trails enjoyed elsewhere in the city. Our partnership with the Lower Phalen Creek Project to restore Bruce Vento Nature Sanctuary is one example of how polluted industrial sites can be transformed into healing natural spaces. Plans to improve Pig's Eye Lake's recreational access and restore the lake's health are also promising.

Friends of the Mississippi River believes that the Mississippi River connects all of us, and that its ecological, recreational, economic and social benefits should flow equally to all people in our community. We are committed to the ongoing work of becoming culturally competent, welcoming and inclusive of all people both within our organization as well as in the range of issues and challenges that we engage in.

Read more about our commitment to equity.

FMR keeps a close watch on park and development proposals through the metro river corridor. We share updates via our email newsletter, Mississippi Messages, and are also in touch with local River Guardians when there are opportunities to take action.