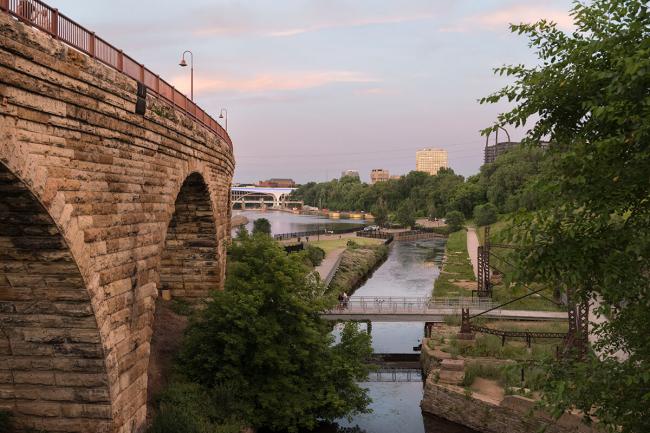 For over 25 years, a controversial hydroelectric project on the downtown Minneapolis riverfront has been trying—and failing—to gain momentum. With another recent setback, we wonder whether this is the final blow for Crown Hydro.

Last month, the Federal Energy Regulatory Commission (FERC) rejected Crown Hydro's most recent attempt to locate a new hydroelectric power mill near St. Anthony Falls and the Stone Arch Bridge. This is a project that Crown Hydro has pursued since 1994, even as the riverfront has changed dramatically and opposition has increased.

The parties that oppose this project make up a lengthy list that includes the city of Minneapolis, the Minneapolis Park and Recreation Board, the Minnesota Public Utilities Commission (PUC), the area's legislators and many others.

Crown Hydro has consistently been unable to demonstrate that it has secured sufficient funding for its proposed project. Due to this, FERC is officially rejecting Crown Hydro's most recent project amendment application from 2015.

This 2015 application was Crown Hydro's latest attempt at switching project locations, after it failed to secure landowner participation at two previous proposed sites. With this rejection, Crown Hydro has no approved location for its project.

Crown Hydro is also facing claims from multiple creditors and has had liens placed against the hydroelectric generators it purchased years ago (likely the company's only substantial asset).

When the project was first conceived in the mid-1990s, the plan was to put the hydroelectric operation inside the Crown Roller Mill building on First Street (historic mill tunnels run underneath). FERC granted the required license for the project, but a few years later the project hit a snag because the building was no longer available. Crown Hydro, however, continued to look for ways to make its project possible somewhere else nearby.

For ten years, Crown Hydro tried to convince the Minneapolis Park and Recreation Board to allow the project to be built on parkland at Mill Ruins Park. When they could not get the park board to cooperate, Crown Hydro asked FERC to help them take the land by eminent domain.

The company also tried to drag the state Legislature into the battle with a proposed bill that would override local governments' authority by requiring them to lease their land to hydroelectric projects, regardless of the project's location or harmful impacts. The bill was quickly withdrawn after a strong show of opposition at a packed public hearing.

When that effort fell flat, Crown Hydro proposed moving the project to yet another location on Army Corps land at the Upper St. Anthony Falls Lock. This new location would have required digging a new tunnel and tailrace (channel) right through valuable parkland, around historic structures and under the iconic Stone Arch Bridge. This is the site Crown Hydro has been pursuing since 2015.

Back in 2002, Xcel Energy (who already operates a hydroelectric station at St. Anthony Falls) granted some funds to Crown Hydro for its project. The PUC voted to pull that funding in 2018, due to the project's heavy opposition and lack of progress. PUC commissioners stated that they no longer believed the project was in the public interest. It doesn't appear that Crown Hydro has been able to secure any new funding since the loss of that grant.

In the 25 years that Crown Hydro has pursued this project, the surrounding area has changed dramatically. It used to be a largely industrial district, but now the downtown Minneapolis riverfront is filled with new restaurants, housing and destinations such as the Mill City Museum and Guthrie Theater. Water Works Park is under construction right next to Crown Hydro's proposed project site. This area is now a crown jewel for the city, drawing residents and tourists alike and driving billions of dollars in investment.

A poorly-done hydroelectric project could harm all of this revitalization and make this popular spot on the river inhospitable to visitors.

Crown Hydro has consistently dodged questions from neighborhood residents about the proposed project's noise, vibration and scenic impacts. It's possible that the project would reduce, or at times even eliminate, water flowing over St. Anthony Falls. It's possible that the project would damage the Stone Arch Bridge (which is prohibited by state law). No one can be sure, because Crown Hydro has never been transparent.

The letter stated, "The Crown Hydro Project is not compatible with plans for the area, in part because its potential water flow, powerhouse, parking lot and portage obstruction threaten the future stability of adjacent historical, cultural and recreational assets on the Mississippi River waterfront. The ongoing nature of Crown’s twenty-four year-old license proceeding (still without a site or specific construction plans) is impeding plans to continue the development of the location as a park and trail hub... Crown has repeatedly failed to show it can meet the needs of the community and the nation regarding this vital piece of riverfront of one of the country’s most important rivers."

The letter also criticized Crown Hydro for failing to meet its regulatory responsibilities and for not adequately consulting with agencies including the State Historic Preservation Office.

Will this project rise again?

After 25 years of Crown Hydro's shenanigans, public trust in the company is understandably low.

If Crown Hydro wishes to keep fighting this losing battle, FERC should require Crown Hydro to start fresh with an entirely new permit application. This would require the project to be reviewed based solely on its current merits and not on its decades-old proposal. With no funding, no location and no local government support, Crown Hydro would likely face a tough road to approval.

More from the river land use and development blog.