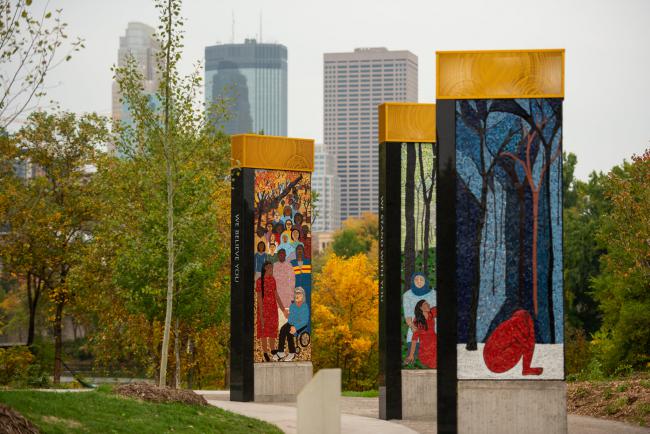 In a peaceful corner of Boom Island Park in Northeast Minneapolis, steps away from the Mississippi River, stands the nation's first permanent Memorial to Survivors of Sexual Violence.

In the summer, nearby picnic shelters buzz with barbeques and birthday parties. Children climb and slide at the nearby playground. Hammocks hang from trees along the river.

But the memorial, while highly visible, is a calm oasis. Winding paths lead to a plaza with benches that invite rest and reflection. Tall mosaic panels created by Lori Greene of Mosaic on a Stick (whose beautiful mosaic triptych also graces FMR's office) tell a story of community support for victim-survivors.

Engraved on the mosaics' tall granite pillars are three promises:
We believe you.
We stand with you.
You are not alone.

Healing power of the river

I asked Nicole Matthews, executive director of the Minnesota Indian Women's Sexual Assault Coalition, about the significance of locating the memorial near the river.

The river is "an additional healing piece of the memorial for all of us," says Matthews. "Being right there on the river is so beautiful. You can see the water, you can see the animals connected to the water."

Matthews calls water "one of our first medicines." Water is healing, nourishing and cleansing. Water sustains us from our first days in the womb. She notes that Anishinabe women like her are life-givers and protectors of water.

"I'm really thrilled about where [the memorial] is," she says. A public memorial is "a way of survivors taking up space in the world, having a place that honors survivorship and healing."

The memorial's design is also beautiful and inclusive, Matthews notes. "People find pieces of themselves" in the art and the words. To her, the red dress worn by the main figure in the mosaics is representative of the Missing and Murdered Indigenous Women's movement. Red is the primary color used by movement advocates.

Like the rest of the Twin Cities' Mississippi riverfront, the land now designated as Boom Island Park is stolen from the Dakota people, who place great importance on nearby features like Owámniomni (St. Anthony Falls) and the now-destroyed Wanáǧi Wíta (Spirit Island). 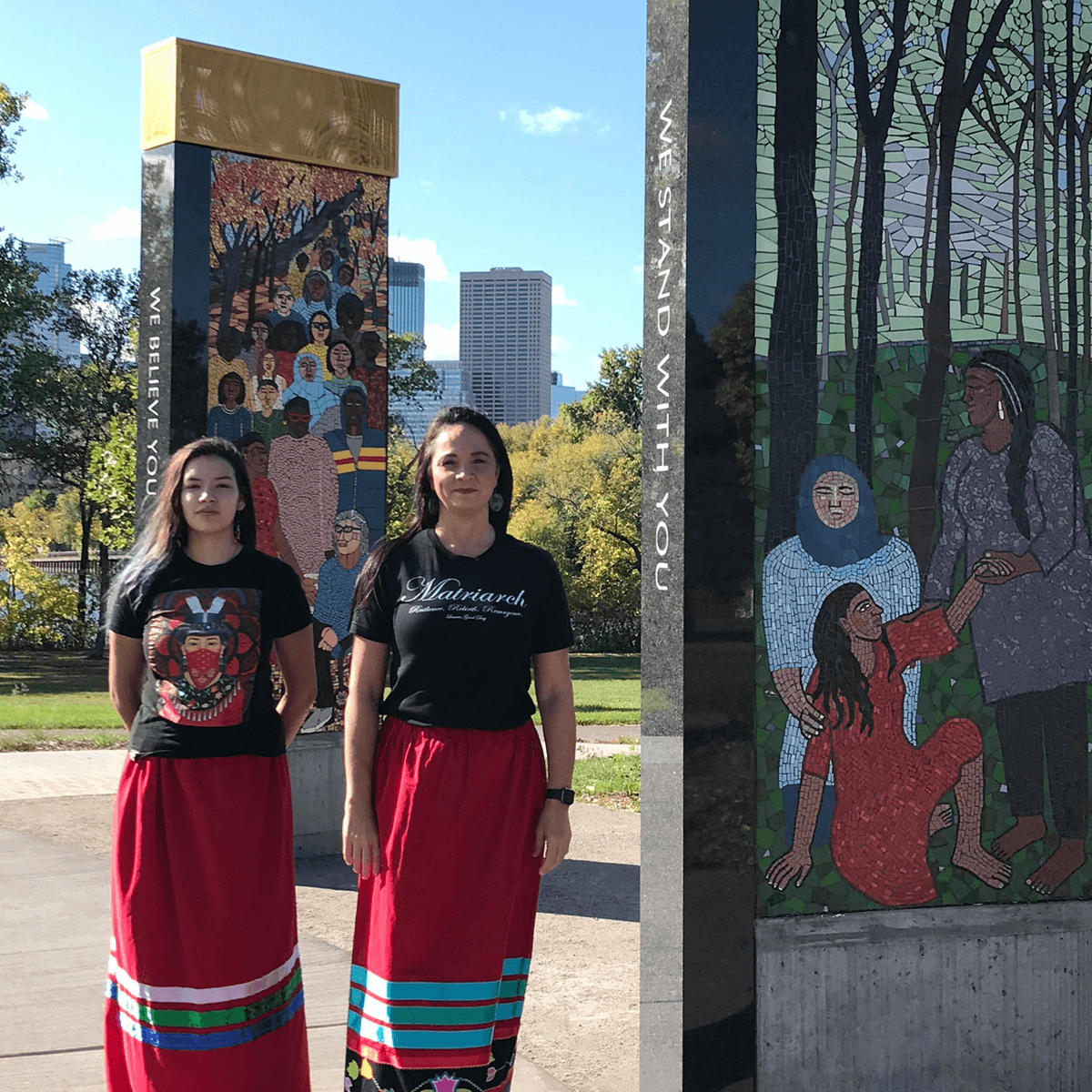 The memorial isn't only intended as a place for victim-survivors to heal. Its public location is also intended to be a call for all of us to take action and pursue justice.

The memorial project was led by Break the Silence, a Minneapolis-based organization whose mission is to support survivors of sexual violence by striving to end rape culture and hold perpetrators accountable.

At the memorial's recent dedication ceremony, Break the Silence founder Sarah Super spoke about why we need memorials like this.

"For far too long, the suffering of sexual violence victims and survivors has been forced into the shadows, swept under the rug," she said. "This memorial brings our suffering into the light where we, as a community, courageously choose to see it. And we choose to see it so that we can create a better future.

"Can a rape survivor heal in rape culture?" Super asked. "This memorial represents our willingness to share the burden of pain. To act, engage and remember the reality of sexual violence that has happened and continues to happen here."

The memorial is located at Boom Island Park (724 Sibley St. NE in Minneapolis) and is now fully open to the public. The recent memorial dedication ceremony is available for online viewing, including remarks from Nicole Matthews, Sarah Super, Tarana Burke, V (formerly Eve Ensler) and others.

The Minnesota Indian Women's Sexual Assault Coalition is a statewide tribal coalition on issues of sexual violence in tribal communities and against Native people.

Break the Silence envisions a world where survivors of sexual violence can tell their stories and trust they will be met with validation, compassion and support.

If you're interested in keeping the parks in this part of the river healthy, join our Above the Falls Stewards program. Our stewardship volunteers help care for several parks near Boom Island, including Sheridan Memorial Park.