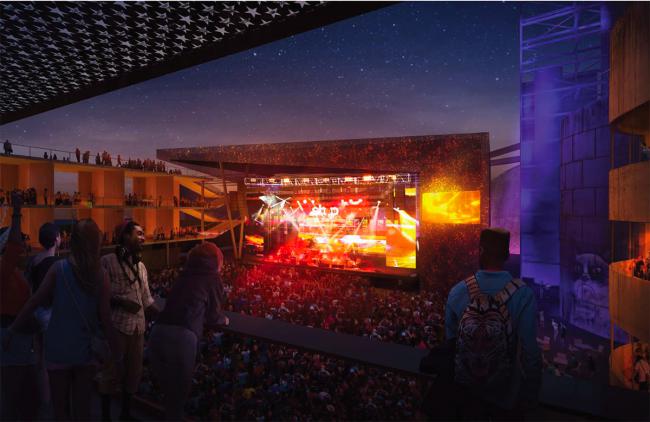 First Avenue's proposed amphitheater at Upper Harbor Terminal in North Minneapolis will hold 7,000-10,000 attendees and be a mix of indoor and outdoor space. But what kinds of jobs will the amphitheater bring to North Minneapolis? Who will own the venue? Who will benefit from its creation? We need answers before we invest public dollars. (Image: preliminary design from the project's 2018 concept plan)

The 2020 state legislative session is underway, and one likely priority this year will be a bonding bill. State bonds are awarded for infrastructure projects in the public interest, including transportation infrastructure, parks and civic centers, schools and environmental cleanup projects.

Government entities across the state have submitted five billion dollars' worth of bonding requests for 2020. Not all of those requests will be granted, making it important to decide which proposals are most deserving of taxpayer investment.

The City of Minneapolis has named First Avenue's proposed amphitheater at Upper Harbor Terminal on the North Minneapolis riverfront as its top bonding priority. The city has requested $20 million to design and construct the venue.

We at FMR have been following this project closely since it was announced. I've seen Dayna Frank, First Avenue's CEO, present aspects of the it to the city's Collaborative Planning Committee several times.

But we still have questions — questions that deserve answers before we consider investing public funds in this amphitheater project.

What she hasn't shared is what kind of jobs those will be. How many of the jobs will be full-time and permanent versus event-based roles? What will wages, average number of hours, and benefits be? In a prior presentation, Frank shared that First Avenue currently employs nearly 400 people, 40 of whom are full-time, salaried employees. That means that 90% of First Avenue's current employees aren't full-time and salaried.

Since the amphitheater would be partially outdoors, there's a seasonal, event-based element to its operations. That implies that some of its employment needs may fluctuate throughout the year.

The entertainment sector offers important jobs that appeal to some people; flexible hours work well for some folks. But in my conversations with North Minneapolis community members over the years, I've consistently heard a desire for jobs that pay living wages with benefits and offer stable schedules. First Avenue's current employment figures suggest that those desires might be inherently tough to deliver in an entertainment venue.

Another important aspect of the project is its ownership. First Avenue has offered some different potential ownership structures, but no decisions have been finalized. The options presented most recently all show the city as having a controlling interest in the project through a long-term lease with the landowner. That landower could be a yet-unformed community entity, either on its own or in partnership with First Avenue. First Avenue would build, own and operate the facility itself under city oversight.

It's good for the public and the community to have a stake in the project. But without the ownership and management structures clarified, we don't fully know where the project's profits will flow. Would state funding in this project really help build wealth for North Minneapolis residents? What share of the wealth from this project will go to neighborhood residents versus First Avenue?

Can you get a radical, equitable outcome out of a project birthed in the usual development politics? We're not so sure.

To First Avenue's credit, their project has continued to evolve in response to the concerns raised by North Minneapolis residents along with advocacy partners like FMR. The latest concept, presented to the Collaborative Planning Committee in January, proposes various community benefits such as prioritization of North Minneapolis vendors and a fund (generated by ticket revenue) that could provide $500,000-1 million each year for small business development, homeownership initiatives, community events or other community priorities.

But the fundamental question of "who benefits?" still remains unanswered.

We also haven't seen any market studies or other data about the project's financial viability. Sometimes public investment should go to "risky" ventures whose balance sheets make it hard to access traditional funding, if those ventures meet critical community needs. But sometimes the risks aren't worth taking.

Without knowing more about the community and economic returns this project could bring, it's hard to know whether this is the right investment in North Minneapolis' future.

What else could $20 million do?

We also wonder what else a $20 million state investment could do in North Minneapolis. Could it fund deeply affordable housing, including homeownership programs? How about providing start-up capital or commercial space for promising businesses owned by Northsiders? Would increased transit and bike/pedestrian amenities expand access to opportunity while reducing neighborhood air pollution? What would investments in health care or education yield?

The city's top priority for state bonds this year is the $20 million it's requested for First Avenue's amphitheater. The city's second-place request is nearly the same size: $19 million for much-needed storm tunnel upgrades that can better withstand the demands of increasing extreme weather events. If history is any guide, it's unlikely that funds will be awarded for both. Governor Walz chose the storm tunnel project for his 2020 bonding proposal over the amphitheater.

We don't know if the legislature will choose to fund First Avenue's project. If the amphitheater doesn't receive state funds, it will likely necessitate a return to the drawing board for the city and development team. It might even lead to more time and space for community-driven ideas for the site to come forward.

The legislature needs to approve all of their bonding decisions by May, just a few months from now. Will we have the answers we need by then about whether First Avenue's concert venue deserves our investment?

On March 10, the state Senate Capital Investment Committee held a hearing to discuss the bonding request. The Star Tribune and MinnPost covered the meeting and interviewed community members both supporting and opposing the project. Both articles also quote a letter that FMR wrote to the committee.

If you're interested in hearing the entire discussion, you can watch a video of the meeting (the UHT portion starts around the 29-minute mark).

If you want to share your concerns about First Avenue's bonding request, you can contact our state leaders through this easy form.

Become a River Guardian to hear from us about more opportunities to act when city and state leaders are making important UHT decisions.