What can cities do to guide development and protect open space? | Friends of the Mississippi River
Skip to main content

What can cities do to guide development and protect open space? 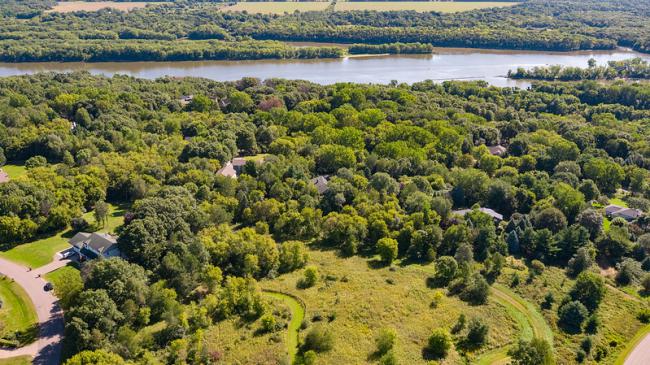 In 2017 and 2018, the City of Inver Grove Heights proposed selling River Heights Park, pictured here, for housing development. Dozens of residents successfully advocated (twice!) for the city to preserve this open space instead. (Image: Tom Reiter for FMR)

When we work with community members involved in local development and habitat protection issues, we often hear similar questions each time: "What can my city leaders do about this issue?" "Does anyone have the power to change this project?"

Cities have a wide range of planning and zoning powers granted to them by Minnesota law, and many choose to use these tools to protect parks, scenic views and other assets in their communities.

Here's a brief summary of some ways a city can shape development and protect special natural assets.

As the image below shows, cities have the most discretion over land use decisions when they're creating the plans and ordinances that provide overall frameworks for development. In later phases of a development process, the city must administer its plans and ordinances consistently; there is less opportunity at this point to change requirements in response to specific projects. 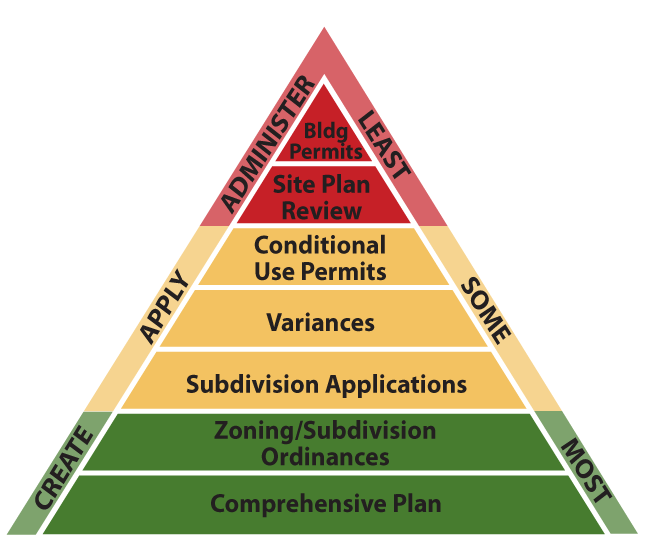 It's common for a developer to request a change to the city's zoning and/or comprehensive plan to enable a desired project. Cities can deny these requests if they have a good reason to do so. But communities might also exercise their planning discretion in this process, for instance, by allowing denser development in some areas in exchange for more parkland.

If a city needs time to study its plans and determine appropriate future zoning for an area before any development applications are submitted, it can adopt an interim ordinance, more commonly known as a development moratorium. This stops new projects from being approved for up to 18 months. Cities frequently use this tool when a large land area becomes available or when a city realizes that it wants to update its ordinances before permitting further development.

Just as cities can designate what gets built where, they can also set standards for how buildings and subdivisions are designed. In the Twin Cities, Mississippi River Corridor Critical Area ordinances guide building heights and setbacks and other design elements that can impact scenic views and public enjoyment of the river. These ordinances also include special environmental protections in areas including vegetation management, erosion control, open space protection and stormwater management.

PUDs are another planning tool to enhance flexibility in a development process. Zoning a property for PUD allows a project to deviate from the traditional development standards if alternative designs can achieve a better public outcome. For instance, a PUD might result in homes clustered together more closely than the city's regulations would otherwise allow, leaving more contiguous open space elsewhere on the property.

Many cities require some amount of parkland to be donated to the city or permanently protected for public use in big redevelopment or subdivision projects. The requirement should ensure that the city's parks grow in proportion to the population demands on them. A common park dedication requirement is ten percent of the land involved in the project (or a cash equivalent). Mississippi River Corridor Critical Area ordinances require more open space dedication in some riverfront areas. Some cities have adopted incentives such as "density bonuses" to encourage additional open space protection during development.

Government entities have the legal right to purchase land (at a fair market value) for public use. This is how most public infrastructure, from parks to schools to roads, is developed. Ideally, the property owner agrees to sell their land. But if they don't, governments can force the sale through condemnation (eminent domain) and compensate the owner. Eminent domain is no one's first choice, but even its existence can motivate property owners to collaborate in a planning process.

Friends of the Mississippi River has helped public agencies acquire dozens of properties for open space protection over nearly 30 years. We're experts at facilitating willing owners' sales and helping cities and other public entities assemble the funding needed for these land purchases.

Often, environmental review is treated as a "check the box" exercise in which nothing about the project is significantly changed to reduce or mitigate its impacts. But it doesn't have to be this way. Communities committed to environmental protection can use the review process thoroughly to determine appropriate land uses and intensities and revise projects to reduce environmental harm.

Of course, this is just a brief summary of complex laws that have been legislated and litigated in many ways. Real estate law is complex. And cities do need to apply these tools consistently. They can't change the rules or impose new requirements after a development application has been submitted. That's why communities need to plan ahead carefully to ensure that their comprehensive plan, zoning and ordinances are aligned with their goals.

Resident advocacy is critical to influencing city decisions about planning, land use and development. To hear about issues in your community, become a River Guardian today. We'll let you know when it's time to speak up, and we'll also provide training and support. (Here are quick tips for speaking at a city meeting about issues like these.)

To learn about current development issues along the Mississippi River, check out our River Corridor program land use and development updates.