Can we just talk about this UHT concert stadium? 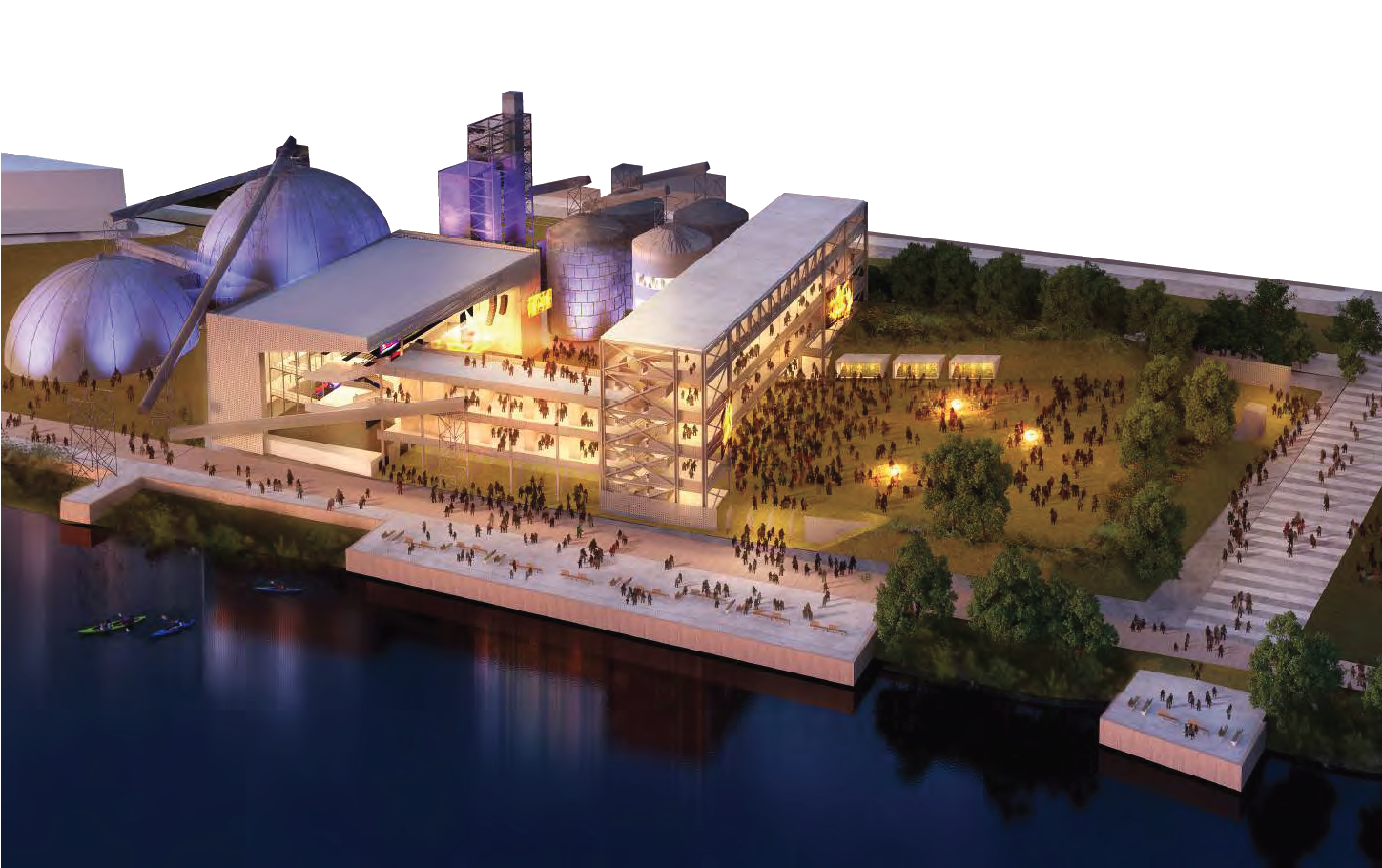 First Avenue's proposed concert stadium at Upper Harbor Terminal is too big, too close to the river, and too costly to the public.

For years before the official plan was released last August, a large concert stadium has been the key element in Minneapolis' plan for its Upper Harbor Terminal redevelopment site on the North Minneapolis riverfront. The proposed venue would integrate architectural elements of the city's former barge terminal and plays a star role in the redevelopment plan. In fact, it is the only primary component described in great detail.

As proposed, the stadium would have a capacity of 7,000-10,000 people and be operated by First Avenue. It would be a hybrid of indoor and outdoor space designed to support programming of different types and crowd sizes.

At its recent meetings, the Upper Harbor Terminal Collaborative Planning Committee was asked to weigh in on questions like, "What should the concert venue be named?" and "Where on the UHT site should it be located?"

From my seat in the audience (FMR is not a member of the committee), all I could think was: These are not the right questions! Such questions obfuscate the real issues at play. Instead of the opportunity to create alternative development scenarios as promised, the committee is being presented with the stadium as a done deal.

Rather than discussing the venue's name and whether it should be 100 yards to the right or left, the community deserves the opportunity to discuss the proposed public subsidies for the stadium, living-wage jobs and whether a large concert stadium is even the right idea for Upper Harbor Terminal in the first place.

At two August UHT committee meetings, First Avenue owner Dayna Frank said the concert stadium needs to have a capacity of 7,000-10,000 people in order to avoid public subsidies and be a "self-sustaining" venue.

Such statements leave out the fact that the project depends on an initial $20 million in taxpayer funds.

According to the city council-approved UHT concept plan, the music venue is estimated to cost $49 million to design and construct, and $20 million of that will come from public sources. The Minneapolis city council has agreed to make First Avenue's project their highest-priority bonding request to the legislature in 2020, at $20 million in taxpayer-funded state bonds.

The city has already received $15 million in state bonds for early work on the UHT site, such as demolition and infrastructure. The $20 million for First Avenue's project would be its second request for UHT. It's highly unlikely the legislature would fund a third, meaning that funding First Avenue could cost us opportunities to secure bond funds for other critical elements of the site.

We've heard at recent community forums that truly affordable housing is a community priority for UHT.

How much housing security and stability could $20 million create for Northside residents? How could $20 million fund other site needs, such as world-class green infrastructure that limits the site's environmental impact on the river, the neighborhood and residents?

We may never get the opportunity to find out; the rushed planning process might not even give us time to explore those questions.

While First Avenue is exploring different ownership structures for the project, it's still likely to end up as the primary owner of its concert stadium. That means profits from this taxpayer-funded project would flow to a private business and its owners. We question whether a $20 million public subsidy for a private business is the best use of taxpayer funds in the face of other pressing needs that could be addressed at this publicly-owned riverfront site.

What kinds of jobs?

In her August 14 presentation, Dayna also shared that First Avenue currently has nearly 400 employees, with 40 of its jobs being full-time and salaried. That suggests that almost 90 percent of First Avenue's jobs don't provide a reliable full-time income.

First Avenue has said that 269 operations jobs (in addition to shorter-term construction jobs) would be created by the UHT concert stadium. We still need more information about what kinds of jobs those would be. During my time in North Minneapolis, both within and beyond my work with UHT, I hear a lot of resident desire for more stable living-wage jobs located in the community.

Entertainment and hospitality jobs often come with unpredictable schedules (and in the case of a music venue, potential evenings and late nights), lower wages, a dependence on tips, and part-time hours that don't provide full benefits. Furthermore, the proposed UHT music venue is partially outdoors, suggesting that some jobs could be only seasonal.

Community members and taxpayers deserve to know exactly what kinds of jobs will be offered by projects seeking public funds: How many of these new jobs would be full-time, year-round, with benefits and reliable hours? What would wages be? How would you prioritize North Minneapolis residents when recruiting, training and hiring?

If this project doesn't provide living-wage jobs for North Minneapolis residents, it doesn't deserve public subsidies. Again, what else could $20 million provide for the community?

As we've written before, FMR isn't opposed to a performing arts venue at Upper Harbor Terminal. Every neighborhood deserves a great place to showcase their talents and enjoy music, dance, theater and poetry. The natural beauty and power of the Mississippi riverfront can be a great complement to that.

The community should have the opportunity to consider a much smaller amphitheater, scaled and oriented to the river, with the benefits of ownership and revenues flowing to the public. That's the conversation we need to be having.