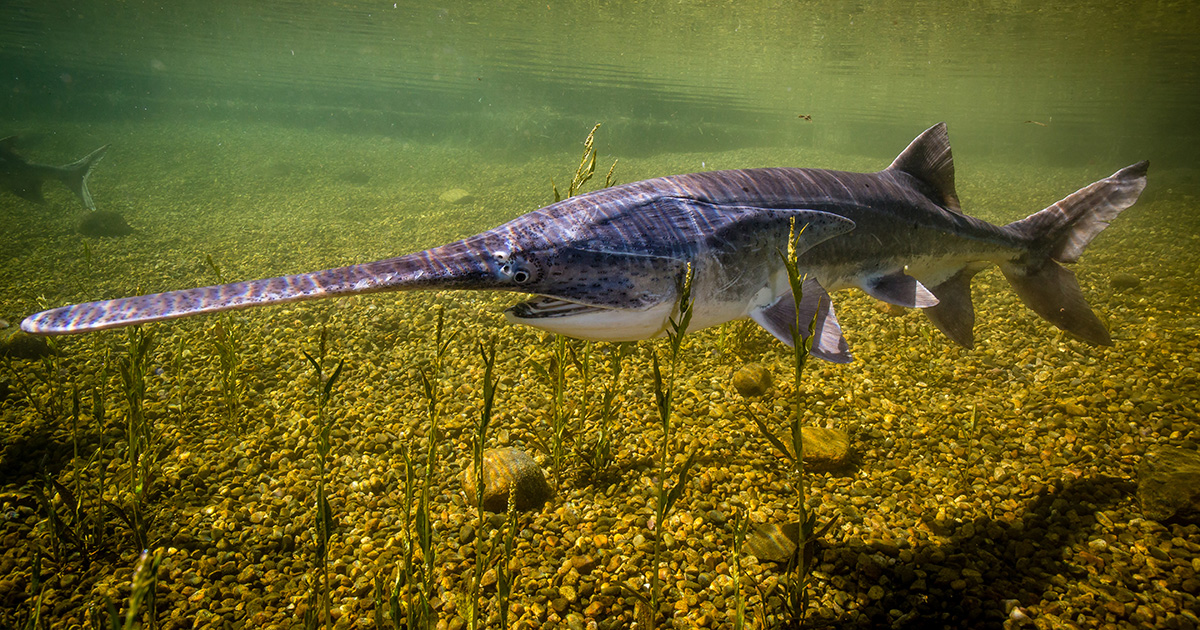 A recent Star Tribune article celebrated the return of paddlefish and other river species as a result of dam removal projects across the state. Could this kind of restoration be possible for the metro Mississippi?  (Image: Ryan Hagerty/USFWS)

Minnesota's rivers contain hundreds of dams, many built years ago for reasons that are no longer relevant or even forgotten altogether. Those dams present hazards to people and other wildlife alike. Removing them can be one of the best ways to restore a river's health, according to a recent Star Tribune article featuring state experts and their work.

For fish and mussels, dams cut off migration routes to breeding grounds, reduce habitat area and harm water quality by creating pools where rivers should freely flow. According to the Minnesota Department of Natural Resources (DNR), once a dam is installed, about half of the species above it die off. The stressed ecosystems become more vulnerable to further harm from invasive species like carp that thrive in lower-quality waters with few remaining predators.

As dams are removed, however, the rivers rebound and an average of 73% of the species return to their former range. The DNR is seeing "river giants" like paddlefish, sturgeon and giant catfish return to areas where they haven't been observed for over 100 years. When a dam was removed from the Minnesota River near Granite Falls, paddlefish returned upstream of the former dam within a year.

Possibilities for the metro Mississippi

To date, the dams removed in Minnesota have been relatively small compared to those on the Mississippi River currently in the Twin Cities or downstream from the metro. But an opportunity to think big is on the horizon as the Army Corps of Engineers begins studying the potential for dam removal in the heart of the metro area at the Lower St. Anthony Falls Lock and Dam and Lock and the Ford dam (officially known as Lock and Dam #1).

Will dam removal present the same potential for our mighty Mississippi as it has on smaller rivers across the state and country? We hope to see that question answered through thorough research and extensive community involvement as the Army Corps begins its disposition study process. Learn more in the video below.

What about invasive carp barriers?

FMR was a leader in advocating for the closure of the Upper St. Anthony Falls lock in 2014 to prevent the spread of invasive carp in the northern part of the state. Few dams are high enough to block invasive carp, so many of them aren't particularly effective barriers. Upper St. Anthony Falls is one exception; Lock and Dam No. 5 near Winona may be another (especially if some modifications are made).

These dams aren't realistic candidates for removal. The commercial shipping industry relies on locks and dams to travel to the upper reaches of the Mississippi's navigation channel in downtown St. Paul. And Upper St. Anthony Falls creates the pool that supplies drinking water to much of the Twin Cities metro while also protecting the falls and surrounding infrastructure from collapse.

So where the locks and dams are likely to remain for the foreseeable future, we should modify and manage them to block invasive carp while limiting their impact on native ecosystems as much as possible. But where dams can be removed, removal and restoration might be the best route to making our rivers healthier and more resilient against invasive species.

Visit our metro dams page to learn more about the upcoming dam disposition study and sign up for email updates.