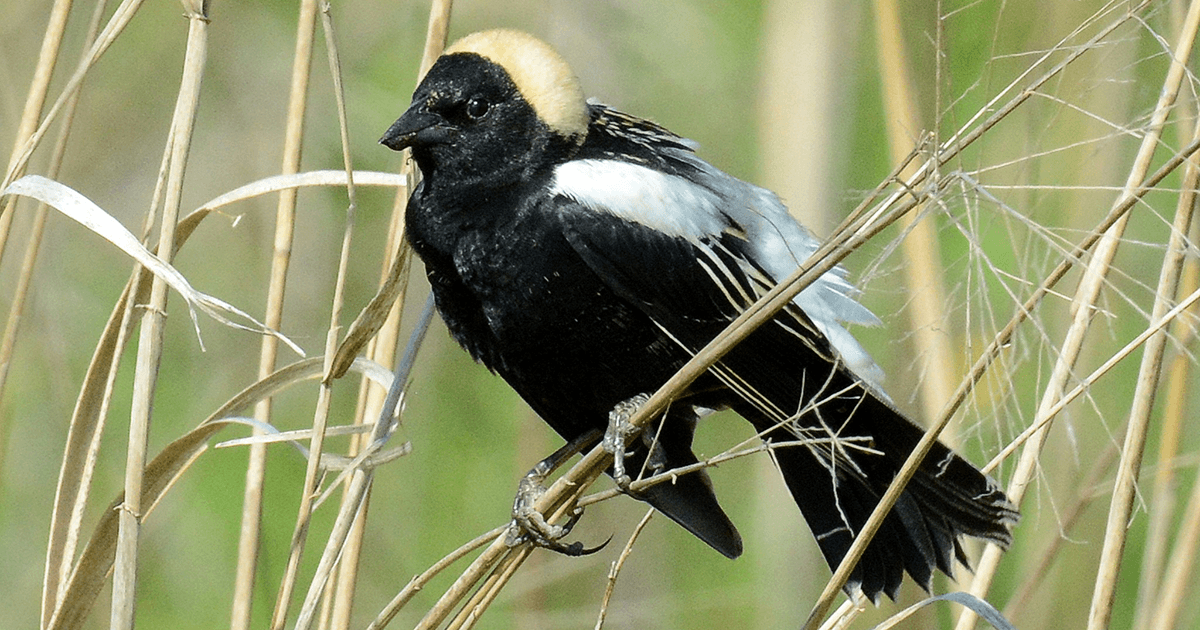 A recent survey of the grasslands in Maplewood called the site ideal habitat for bird species, including the bobolink and other Species in Greatest Conservation Need. (Photo by Jim Hudgins/USFWS)

Ramsey County is planning to redevelop two county-owned sites in Maplewood near Battle Creek Regional Park: a 77-acre grassland adjacent to the park and a county correctional facility, and the nearby Ponds at Battle Creek golf course. Both are near the river, and home to endangered species.

FMR has been actively engaged in the planning process for the sites' futures, including advocating that redevelopment plans fully consider their natural resources.

Thanks to advocacy by FMR and community members, the county commissioned an independent survey of the bird, bee and plant species at both properties. The final report was just released.

Shannon Prather has provided thorough coverage of this issue for the Star Tribune, and her latest article details the survey findings and stakeholder reactions.

The final report largely confirms what we already believed: The grasslands are "ideal habitat for bird species" and home to the endangered Henslow's sparrow as well as seven additional bird Species in Greatest Conservation Need. In total, 53 bird species were observed at the grasslands in just two visits by an expert avian surveyor.

The grasshopper sparrow population in Minnesota has plummeted 97 percent since 1966. The endangered Henslow's sparrow, 67 percent. Other birds' declines are similarly dramatic.

Minnesota has lost 98 percent of the grassland habitat that existed before European colonization. Because grasslands are easy to clear and build on, they've been decimated by development and agriculture. The report notes that this kind of landscape is now rare in the Twin Cities.

What does this mean for the grasslands' future?

At FMR, we rely on science to guide our work. In this case, the science is clear that many of the rare and vulnerable birds who rely on the grasslands are very sensitive to habitat "patch size." Smaller areas simply don't provide what these species are looking for. Three of the species at the grassland have been found to need habitat areas of 74+ contiguous acres for reproductive success.

Some Ramsey County leaders have suggested that the 77-acre grassland be partially developed and partially preserved. On the surface, this might seem like a compromise scenario. But reducing the size of the grassland habitat could completely eliminate its habitat functions for these rare birds. Especially for those who rely on this area for nesting habitat.

We'd like to see a more detailed study of this habitat area and the birds' habitat needs before the county makes any decisions about development. It's quite possible that preserving the entire property (as an addition to the adjacent Battle Creek Regional Park) is the only way to ensure that it remains a home for birds who don't have another suitable place to go.

The natural resources inventory also examined bees. While the surveyors didn't find the federally endangered rusty-patched bumblebee at either property, there are other confirmed sightings of this endangered bee at the Ponds at Battle Creek golf course. The bee was photographed there by an expert gardener as recently as July 2021.

This opens similar questions about the future of the golf course. Development would likely disturb bee colonies and hibernation areas and limit usable habitat.

Two bird Species in Greatest Conservation Need, the chimney swift and brown thrasher, were also found at the golf course.

Golf courses provide mixed habitat outcomes. While the green space and plantings can be home to a variety of animals, the pesticides often used for management, the monocultural turfgrass present across much of the course and the high level of human activity limit benefits.

As with the grasslands, we urge further study of the golf course's current inhabitants and their habitat needs before any redevelopment decisions are made.

It's been suggested to us that preserving the 77-acre grassland as open space is harmful to Ramsey County residents in need of the affordable housing the county would like to build on this site. Indeed, we are in a very serious housing crisis that demands a response from our elected leaders.

But to portray this considered case for conservation as "people versus birds" is reductionist. We're all part of the same complex ecosystem. Humans are dependent on our plant and animal relatives to help keep our air and water clean, to pollinate the plants we eat and sustain the planet that sustains us.

We simply don't know enough to decide that the Henslow's sparrow or rusty-patched bumblebee aren't important to human survival. Sometimes we don't fully understand the consequences of extinction until it's too late.

We hope to see Ramsey County preserve this grasslands site as open space and focus its response to the housing crisis elsewhere. Our metro area has many opportunities to preserve and add affordable homes, from helping modest older homes stay in good condition to adding denser housing in areas that have already been developed and disturbed (for instance, many shopping malls are converting excess parking lots into new development).

We'll keep our Ramsey County River Guardians informed about opportunities to weigh in on the future of these sites. If you're not yet a River Guardian, sign up today.

More from our land use and development blog

More from our conservation blog