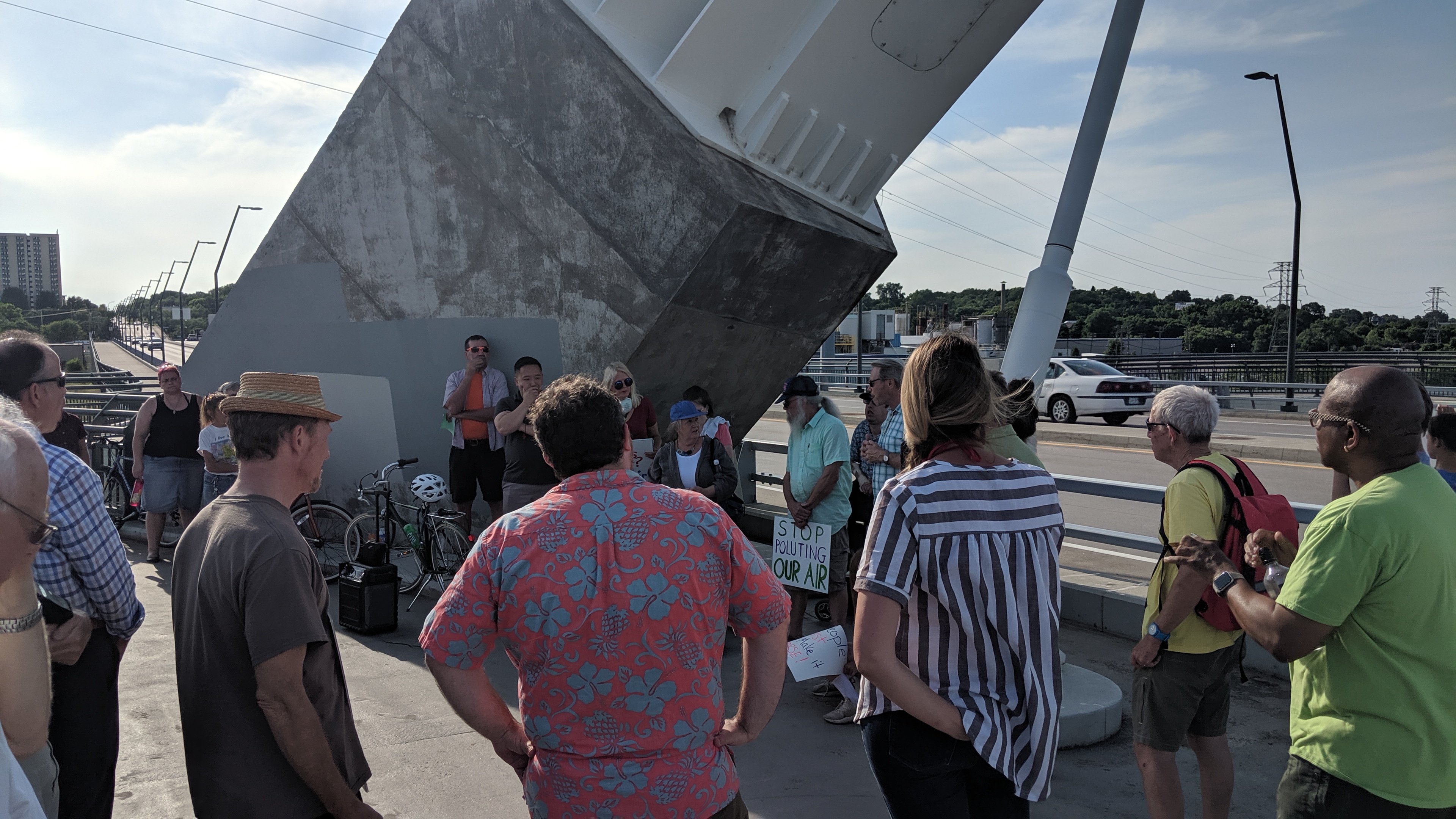 FMR staff participated in a rally on the Lowry Avenue Bridge near Northern Metals Recycling on August 1, the day its shredding operations were supposed to cease — but didn't.

Northern Metals Recycling, located on the North Minneapolis riverfront next to the Lowry Avenue bridge, has been violating air quality standards for years. Lead and other pollutants have been contaminating the air in North and Northeast Minneapolis, and the site is likely among the contributors to North Minneapolis' high rates of asthma, lead poisoning, and other health inequities.

Following a settlement with the Minnesota Pollution Control Agency (MPCA) in February 2017, Northern Metals agreed to close their metal shredder by August 1, 2019, and pay $2.5 million in penalties and settlements. Unfortunately, they have violated the terms of this agreement.

Despite having nearly two and a half years to construct their new shredding facility in the city of Becker, Northern Metals notified the MPCA in June that the new facility would not be ready by August 1 as the city water and sewer services were not yet connected. The company requested a two-month extension to continue operating its North Minneapolis shredder — and to continue polluting the riverfront.

The MPCA denied this extension, a decision we applaud. Unfortunately, a Ramsey County judge overruled the MPCA, declaring that Northern Metals can continue operations while the MPCA and Northern Metals undergo the dispute resolution process outlined in the original settlement.

While we believe Northern Metals will end its riverfront pollution activities soon, we're angry that North and Northeast Minneapolis residents have to endure even one more day as neighbors to a facility that knew for years that it was releasing excessive levels of lead and other contaminants into the air.

In a press release, some neighbors of the site stated, "Those of us living near and around the industrial site have been working hard for nearly a decade now to focus regulator and policymaker attention to what we have known for a long time: that Northern Metals and other industries in the neighborhood are emitting toxic pollution. This pollution is overburdening our community and having a cumulative impact on the health of our children and families. Much of this work has been unpaid, done by mothers, fathers, children, teenagers, grandparents not affiliated with any organization, but by those that are committed to protecting the neighborhoods we live in from such harms. While our work fades in the background many times, today we stand up to hold Northern Metals and the legal loopholes accountable that are allowing this environmental racism to continue."

FMR staff joined a recent rally (pictured above) with area neighbors and elected leaders and we're continuing to work with residents, elected officials, and the MPCA to ensure that Northern Metals ends its riverfront operations as soon as possible. The company has stated that it would lose $10.5 million in revenue for each month it's unable to operate its shredder; we believe that some of that revenue should be shared with the community that's continuing to suffer harm every day that they continue their polluting operations.

We'll keep this page updated as new information becomes available. Follow our river corridor land use and development blog for more articles like this.

Become a River Guardian to hear about easy opportunities to advocate when important river issues arise.

Tags:
Above the Falls
Advocacy
Land Use & Planning