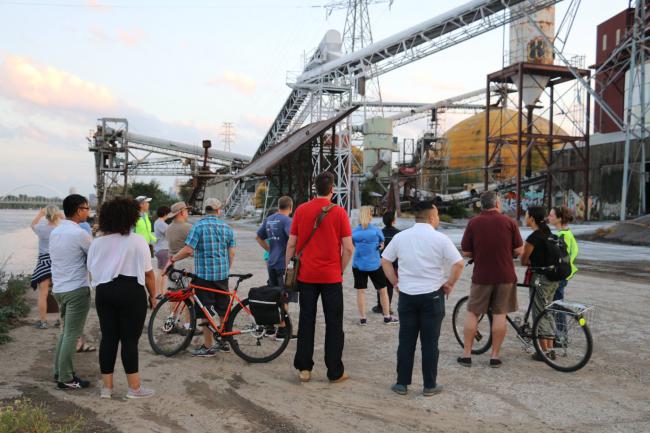 The Upper Harbor Terminal, the closed port of Minneapolis, is headed for a major makeover. (Photo by Jason Daum, Blue Cross Blue Shield Center for Prevention)

The 2018 Minnesota legislative session resulted in very good news for a 48-acre riverfront site in North Minneapolis known as the Upper Harbor Terminal. An influx of $15 million state dollars will help kickstart its redevelopment into housing, offices, stores, restaurants, an amphitheater, parks and trails.

The Upper Harbor Terminal was the northern-most barge terminal — the end of the navigation channel on the Mississippi River — until it closed at the end of 2014. Now, the city of Minneapolis and the Minneapolis Park and Recreation Board are collaborating to plan for the future of this city-owned site.

The recently approved state funding will go toward the initial infrastructure improvements needed to stimulate the development of the site, such as stormwater sewers, utilities, street improvements to North 1st Street and Dowling Avenue North, and improved pedestrian access to the river.

All work will be focused on the piece of the Upper Harbor Terminal parcel upriver/north of Dowling Avenue North. To learn more, check out the Star Tribune's article on this most recent funding development.

FMR's work Above the Falls

FMR has long supported the redevelopment of the Upper Harbor Terminal. Its transformation will contribute significantly to the vision for the area laid out in the Above the Falls Plan, which calls for continuous riverfront parks and trails in North and Northeast Minneapolis — something south Minneapolis residents have long enjoyed.

Since, we've been working to ensure that industrial lands are turned into new riverfront parks and that existing residents will be able to easily access them.

Learn more about FMR's research and community input on the seven North Minneapolis routes across Interstate-94 to the Mississippi River. Then, read more about FMR's work to bring together neighbors, city/county/state staff and other decision-makers together to advocate for community-identified changes to Dowling Avenue North.

What can you do?

Stay on the lookout for July meetings to weigh in on the Upper Harbor Terminal redevelopment plans! In the meantime, learn more from the joint city and park board project website: upperharbormpls.com.

And if you'd like to be notified when river redevelopment projects come up in your community, sign up to be a River Guardian!