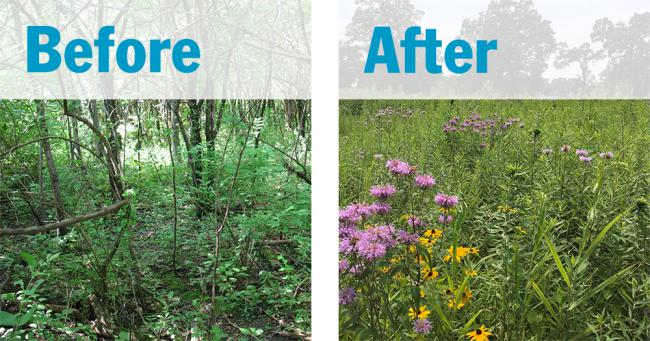 2019 marked the twentieth year that FMR has worked on ecological restoration at the Pine Bend Bluffs area of Flint Hills Resources' land. A lot has happened in those 20 years. We've converted a buckthorn forest to oak savanna and a Siberian elm forest to prairie. But has wildlife found these restored habitats?

Pine Bend Bluffs Natural Area is a 1,300-acre corridor along the western bluffs of the Mississippi River in Rosemount and Inver Grove Heights. The 300-acre Katharine Ordway Natural History Study Area of Macalester College is at the north end, the 700-acre Flint Hills Resources property is at the south end and the Pine Bend Bluffs Scientific and Natural Area is in the middle.

The varied terrain of these sites — deep ravines, steep slopes, level blufftops and lowland — supports many different plant communities from seepage swamps and floodplain forest to hot, dry bedrock bluff prairies and oak forests in between. This area includes some of the highest biodiversity sites in Dakota County.

The case for restoration at Pine Bend

Unfortunately, after many decades of fire suppression and encroachment of invasive species, many areas in this region became extremely degraded, with a significant loss of native plant diversity.

Prairie and savanna are the two most imperiled habitat types in our region. Over 99% has been lost since the time of European colonization. This has caused a steep decline in the animals that depend on those habitats, especially grassland birds, native bees and other pollinators.

All these years, we've been working to regain some of the native plant composition of those imperiled habitats at Pine Bend. Now we want to determine if these restorations are “working” for wildlife. Are native animals using these transformed habitats?

In 2019 FMR hired wildlife biologist Chris Smith to conduct pollinator surveys at the native bluff prairies and restored savanna and prairie units. While we do not have any “before” data for the restored units, they were entirely covered by buckthorn. We're confident that we would have found very few pollinators or other grassland species there.

The survey results show that wildlife were indeed using the restored habitats. In fact, the restored units were supporting as many pollinators as the native prairies. 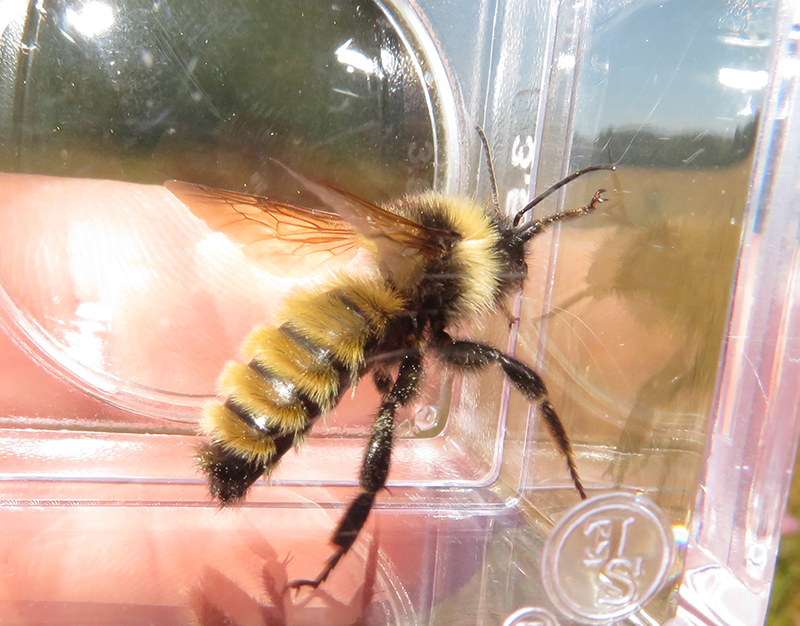 The yellow bumblebee, a Species of Greatest Conservation Need (not rare or endangered, but of concern due to declining populations), was in both the remnant and restored prairies. Most notable of all was the discovery of a single federally endangered rusty-patched bumblebee at the restored savanna.

Native lady beetles (or ladybugs) have largely been displaced by Asian lady beetles in Minnesota, so they're now uncommonly found. But our survey did uncover a native glacial lady beetle.

We noted three tiger beetle species. Though none are considered rare, tiger beetle populations have also generally declined. Tiger beetles are often brightly colored predacious insects that live in a variety of habitats. The beetle larvae grow for about one year before pupating, and the adult beetles can live for nearly four years. Because of their longevity and tendency to specialize in certain habitats, they are often used as indicators of habitat quality.

Five reptile and amphibian species were also noted at the site, including two Species of Greatest Conservation Need: an eastern hog-nosed snake, which is also a new species for the site, and a six-lined racerunner, one of Minnesota’s three little lizard species. Our survey found a shed skin from a hog-nosed snake, but an employee volunteer found a live adult.

Another volunteer also found a spiny softshell turtle, which had not been recorded at the site before.

FMR has been conducting breeding bird surveys at the property for over a decade. Nearly 80 species have been recorded, including 13 Species of Greatest Conservation Need.

Red-headed woodpeckers are one species of particular interest that has been seen at the site for the past few years, but only during spring migration. This woodpecker is an iconic species of oak forests and one that we hope will eventually take up residence at the restoration.

These wildlife surveys, though not comprehensive, are providing direct evidence that restored native plant communities can and do provide vital habitat for many of the wildlife species that are declining.

We're grateful to our partners, volunteers and members for making sustained projects like this possible.

Read more from our conservation blog.

How FMR's priorities fared this legislative session
New York Times spotlights U of M's clean-water crops
Meet our new staff!
FMR welcomes Dr. Kate Knuth and Aubre Parsons to our board of directors
Join us for lock and dam focus-group tours this summer
Mississippi named one of the 'most endangered rivers' in the US