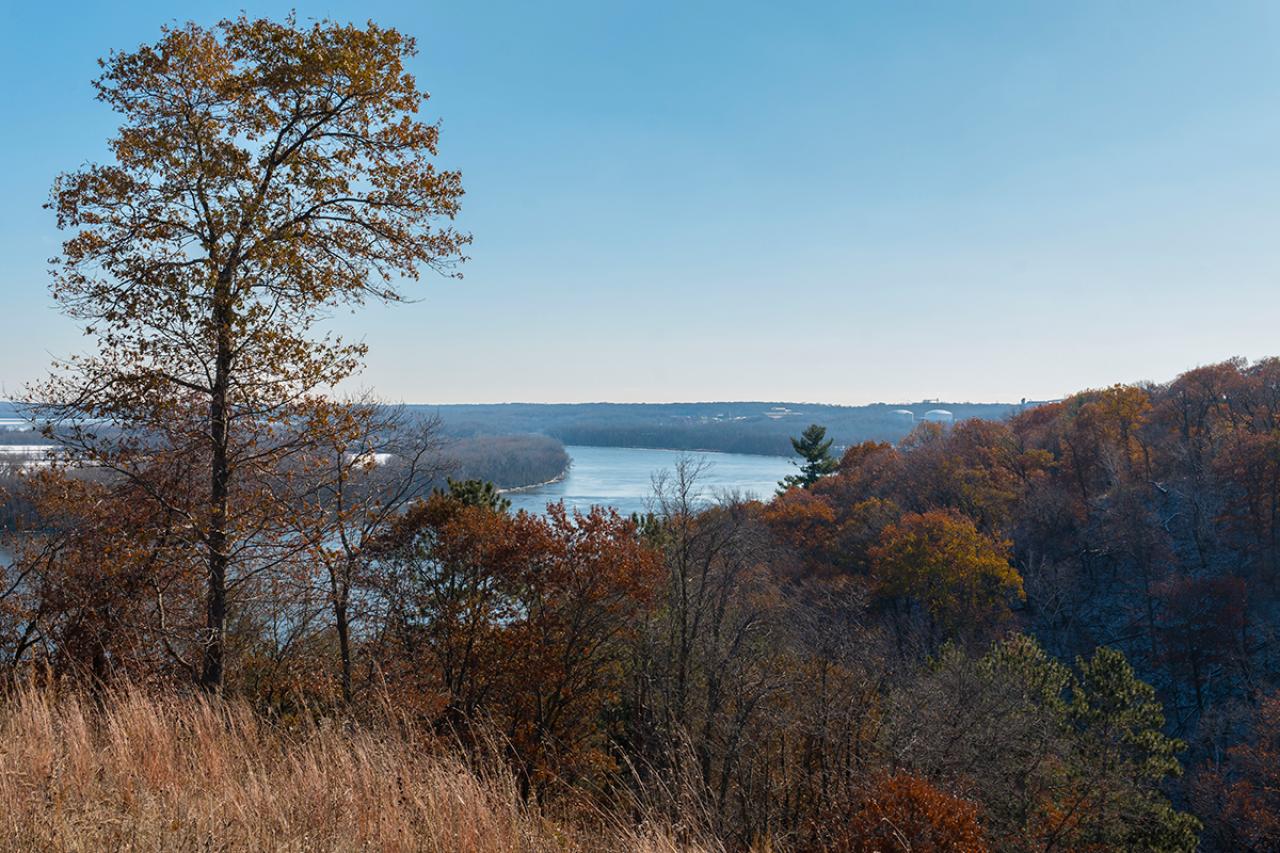 Pine Bend Bluffs Natural Area covers 1,300 acres of woodland, wetland and prairie stretching along the west bend of the Mississippi River about 15 minutes south of downtown St. Paul and west of Hastings.

While much of this natural area has no public access except during FMR volunteer events, the public is welcome to visit Pine Bend Bluffs SNA. (See the MN Department of Natural Resources website for more info.)

The name Pine Bend Bluffs refers to the large white pines that formerly graced the bluffs around the river's bend. You can still see a few of these majestic trees towering above the canopy.

Pine Bend Bluffs Natural Area is known for the stunning views of the Upper Mississippi River basin its 200-foot bluffs offer, as well as the critical role it plays in providing wildlife habitat. The area has become increasingly significant and unique as development and invasive species continue to fragment and degrade natural areas along the Mississippi River.

Due to conservation and restoration efforts, Pine Bend Bluffs Natural Area remains one of the largest and most diverse ecosystems remaining in the Twin Cities area. It's home to waterfowl, turkey, deer, coyote and fox, as well as several rare plants and animals, including the eastern hognose snake, six-lined racerunner, native glacial lady beetle, endangered rusty patched bumble bee, and at least 13 bird Species of Greatest Conservation Need. 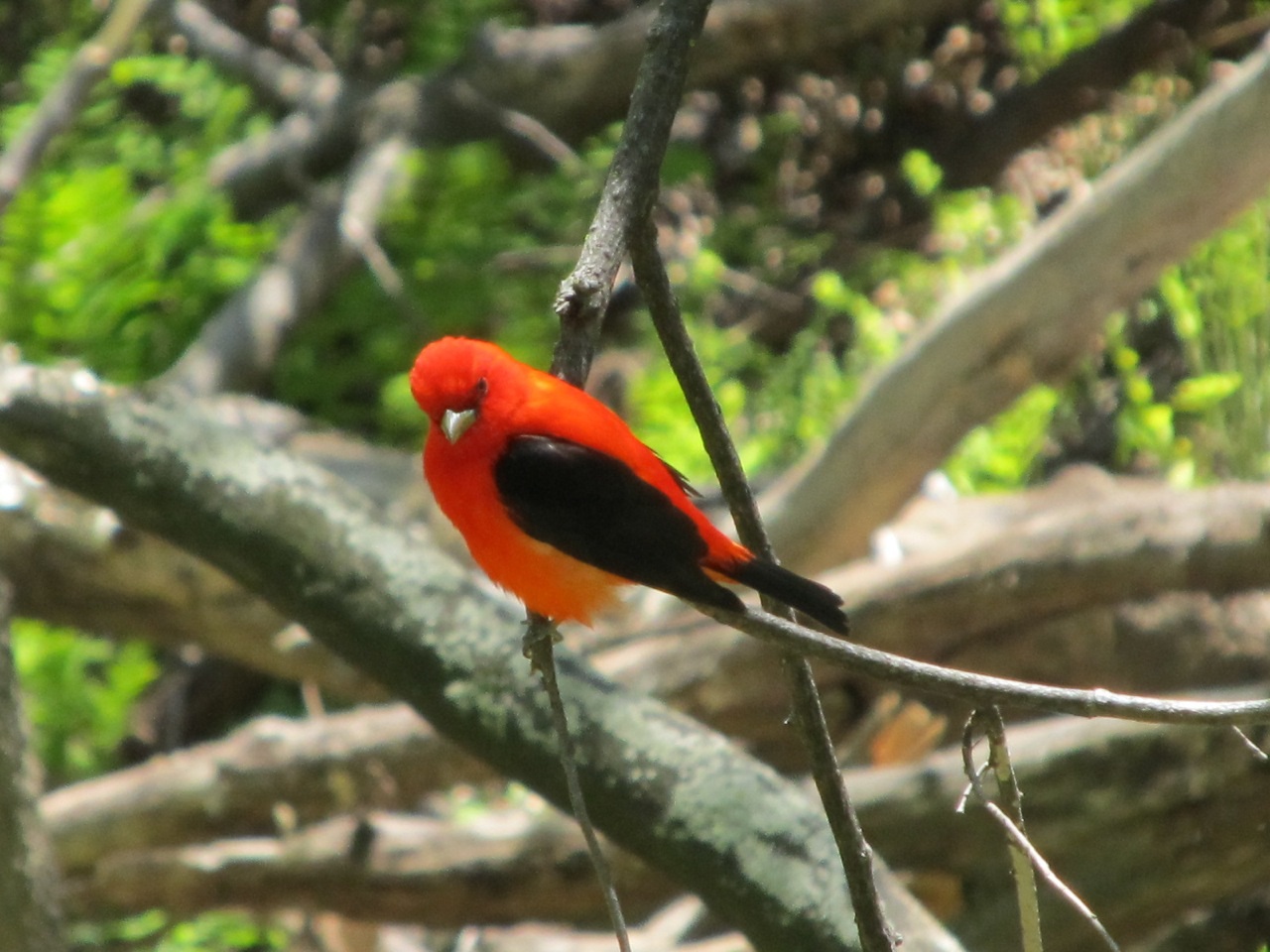 Pine Bend's location along the Mississippi River is vitally important as a breeding and resting area for hundreds of bird species that use the corridor for migration each year, including the scarlet tanager pictured above.

Settler-colonial uses of the blufflands (including pasturing and homesteading) and the elimination of fire as an ecological process has altered plant communities at Pine Bend Bluffs Natural Area. Invasive plant species, especially buckthorn and garlic mustard, present the most significant threat to the native oak savanna, tallgrass prairie, and the rare sand-gravel prairie communities. These plants choke out native vegetation diminishing the quality of habitat for wildlife.

Friends of the Mississippi River has played an instrumental role in the protection of these lands.

FMR reached out to landowners and eventually brokered introductions to potential partners who could buy and preserve land, either as a public natural area or a conservation easement that would offer protection from development.

In 2002, FMR-led efforts culminated in the creation of the Pine Bend Bluffs Scientific and Natural Area — a designation given to areas that deserve the highest protection for their rare natural features. In February 2011, FMR secured another 66 essential acres, turning the SNA into one continuous corridor, a boon for plants and animals. Then, in partnership with FMR, Dakota County, and the city of Inver Grove Heights, Macalester College enrolled the majority of their field station in a conservation easement in 2012. The protection of the Pine Bend Natural Area is an excellent example of the power of partnerships — between institutions, landowners, and community volunteers. In fact, Pine Bend Bluffs Natural Area won the 2007 Minnesota Environmental Initiative Award in Natural Resources.

In addition to protecting land, we also restore and steward much of Pine Bend Bluffs SNA and the Flint Hills Resources natural area. We're managing 400 acres of forested areas for buckthorn and restoring over 70 acres of native prairie and savanna.

We're working to sustain and improve the oak forest plant communities by controlling invasive woody plants to better allow native plants to thrive. We aim to expand the bluff prairies to their historic extent and to improve conditions for the native plants by reducing woody plants and reintroducing fire to their ecology. Many former pasture areas provide opportunities to restore native prairie and savanna.

Volunteers have made significant contributions towards our restoration goals. 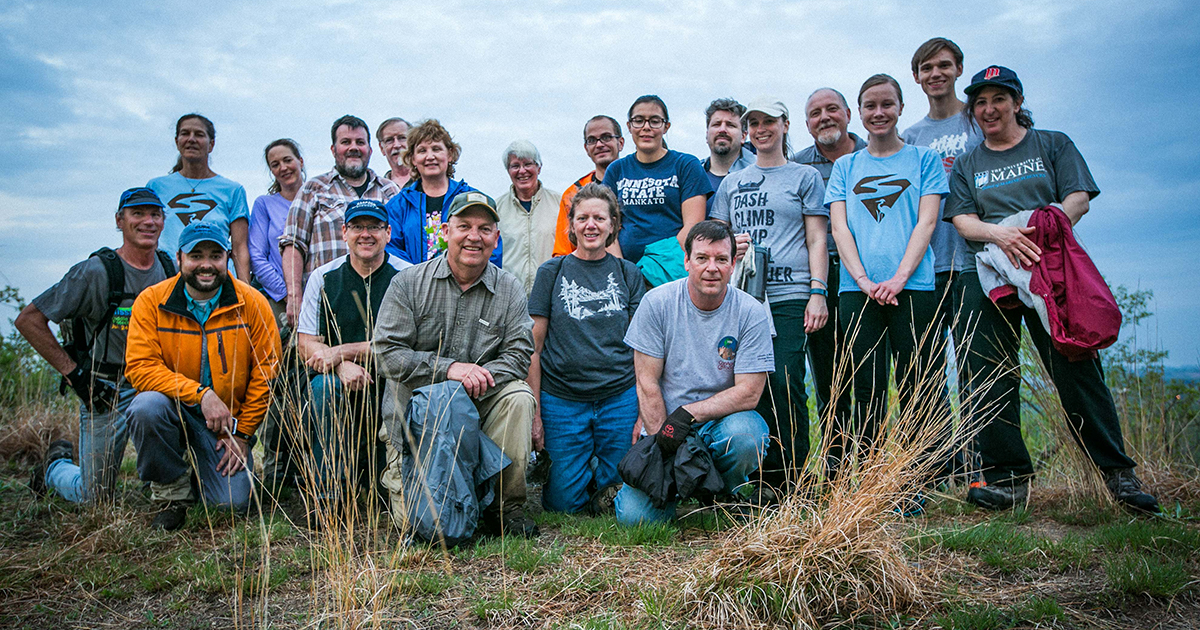 Working with FMR staff, volunteers have dedicated many hours to removing invasive plants and collecting prairie seeds to broadcast. Volunteers have also planted native wetland and prairie plants, including oak trees via acorns. Early on, volunteers learned to think like squirrels, who scatter-hoard the acorns in more locations than they can remember to re-establish the tree component of an oak savanna.

Plus thousands of volunteers and generous donors like you who sustain all of our conservation efforts.