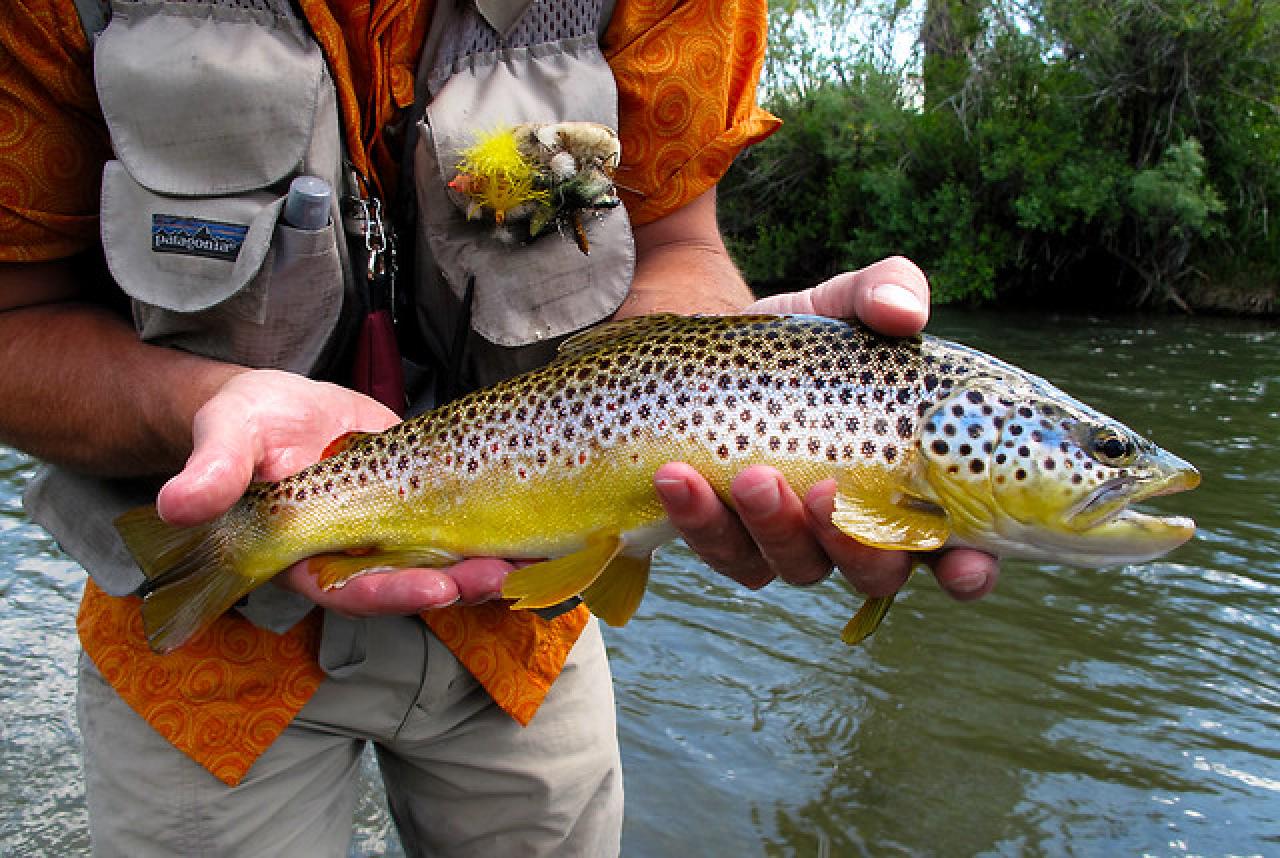 In a cold prairie river just 20 or so minutes south of St. Paul, large brown trout gather in the shadow of red-twig dogwoods, willows and other stream-side plants.

Despite their name, some days these big fish are silver-hued; others, more black. But, always, they are wily, and a beautiful reminder of the importance of protecting our local waters.

Before meeting the Mississippi in Hastings, the Vermillion River flows through the heart of Dakota County. In its healthiest reaches lie trout that can grow up to 30 inches in length (according to the Farmington Independent and other sources).

As a result, the small and easy-to-miss Vermillion River has earned a big reputation: It's the only trophy trout stream located in a metro area in the United States.

While rainbow trout are stocked here annually, the river's large brown trout population is naturally reproducing and self-sustaining, another rarity for urban/suburban areas.

Brown trout evolved in Europe and were brought to Minnesota. Unlike some of their traveling companions (say European buckthorn or garlic mustard), however, they're not known for significantly disrupting ecosystems, especially in waters no longer cold or clear enough for brook and lake trout, their native cousins.

Still, brown trout need water that's not only cold but clear and rich with oxygen. Many streams and rivers have too much sediment from erosion, too much fertilizer from yards and farms, and too much warmth from industrial discharge, runoff from hot paved surfaces and the clearing of shade trees for these fish to survive. These streams and rivers aren't inhabitable for our trout, at least for now.

FMR works to reduce sediment and fertilizer (especially nitrate) at the policy level and protects and restores important lands along this tributary. The South Branch Vermillion River Aquatic Management Area, for example, is tended by FMR Vermillion Stewards volunteers (at events like this one, May 23, 2019), and provides a buffer zone to reduce pollution and provide habitat for brown trout and other wildlife. 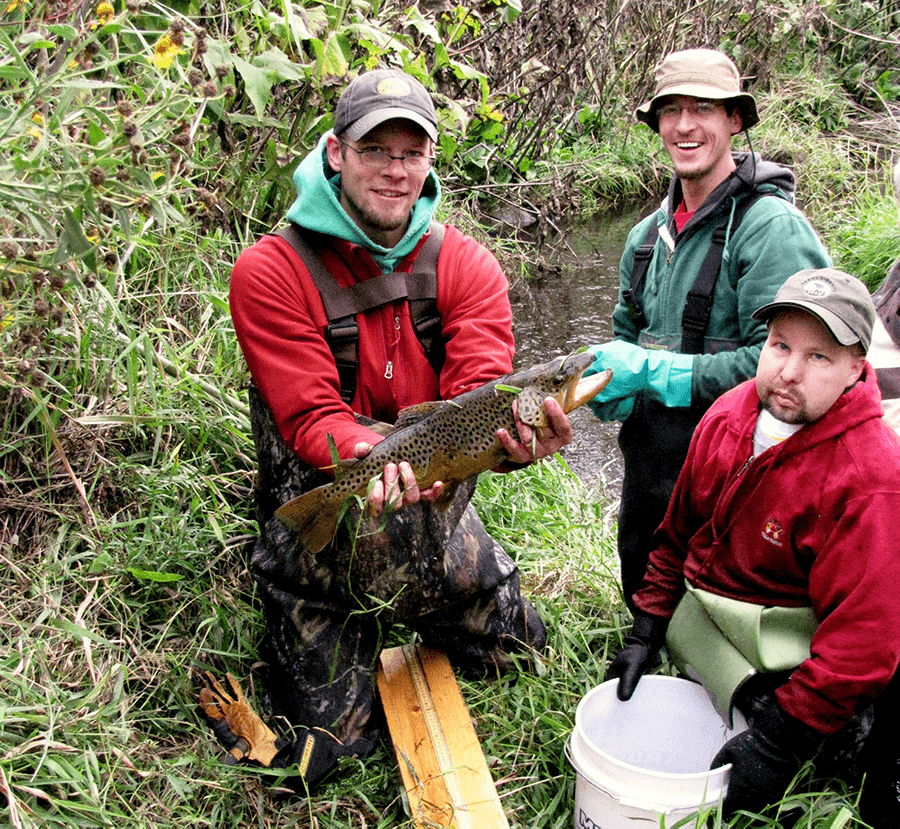 FMR volunteers assist with a trout survey in the Vermillion River.

Not only do brown trout range from silver to black in color, but they're often spotted and multi-hued — and they can rapidly change color! When aggressive, they darken. To show submission (to, say, a larger fish), they lighten. According to Wild Trout Trust, they can also shift into tones to better match the color of their background.

Between being difficult to spot and their significant size, they've developed quite the following in some fishing communities. As Steve Ryan put it for "Outdoor Life":
"Though it might be the greatest understatement in fishing, there is something special about big brown trout. ... Their allure comes not only from their size and beauty, but also from their wily nature. They rarely afford anglers a good enough look at them to even confirm their existence. They are masters of avoidance, spending most of their time in undercut banks and deep pools. No sooner do you get a glimpse at their daytime movement than they go nocturnal and vanish into the dark."

Twin Cities anglers are up for the catch-and-release challenge. Some, like members of Minnesota Trout Unlimited, help to protect their habitat through restoration projects then offer tips as they document their trout travails.

With human fishers out of the picture (brown trout are catch-and-release here), our Vermillion's brown trout's main predators are bigger trout and mergansers. In other areas, smaller trout are also eaten by otters and water snakes.

Brown trout are hearty eaters. They feed on land and water insects, zooplankton, worms, crayfish, small clams, snails and a variety of small fish. And according to Lake Superior Streams, "In a few strange cases, large browns have been known to eat young mink and small turtles." 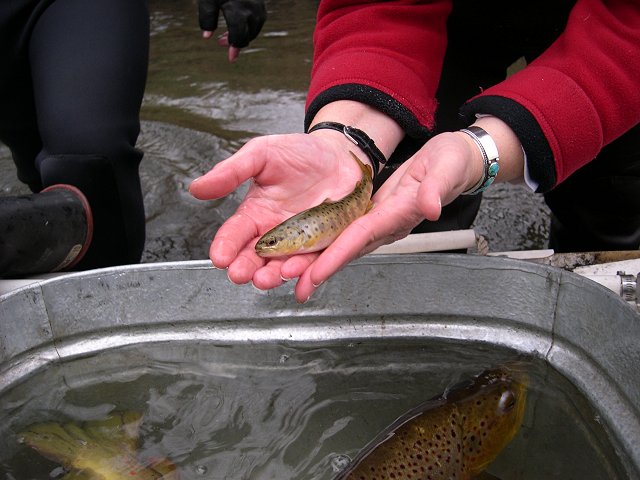 Brown trout average 9 inches in the Vermillion River according to DNR surveys but reach up to 30 inches in length.