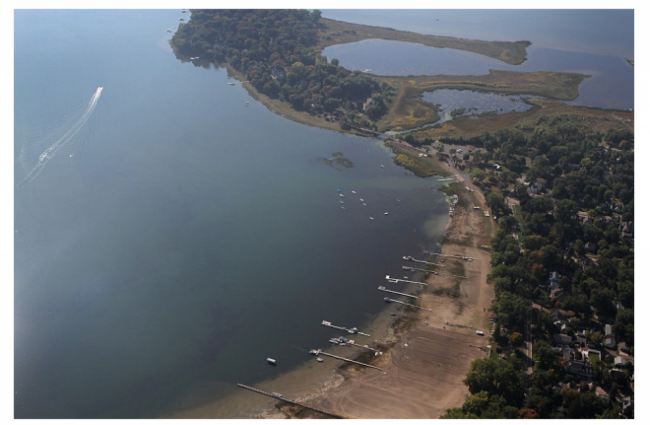 Water levels in White Bear Lake have fallen some years due to excessive pumping from the aquifer underneath the lake.

As reported by Josephine Marcotty in the Star Tribune, the Minnesota Department of Natural Resources' request to stay an order restricting heavy water use around White Bear Lake has been roundly rejected.

Ramsey County Judge Margaret Marrinan denied a request by the DNR to stay her September ruling and its request for a new trial, harshly criticizing the agency for what she called a “stunning” history of failing to comply with state laws designed to protect the environment.

Located about 10 miles north and east of St. Paul, White Bear Lake straddles Washington and Ramsey counties. At 2,400 acres, it's the second largest lake in the metro area. While the lake's water levels are notoriously unstable, recent years have seen steep declines. Over the past decade, the lake has lost more than a quarter of its water volume according to a report from the Freshwater Society.

As FMR previously noted in a feature article on this topic, the consequences go beyond disappointed boaters, anglers, swimmers and beachcombers; homeowners around the lake have seen their property values plunge as much as 40 percent.

The 140-page ruling by Judge Margaret Marrinan made it quite clear that White Bear Lake deserves protection, that excessive groundwater pumping is harming the lake and the aquifer and that the DNR must reign in permitting to protect the lake and aquifer per the Minnesota Environmental Rights Act.

Judge Marrinan prohibited the DNR from issuing new or increased groundwater withdrawal permits within a 5-mile radius of the lake until a series of other steps, such as establishing an annual withdrawal level for the lake, had been taken. (Learn more in our detailed article on the fall ruling.)

Not long after, the DNR requested a stay of the September ruling and new trial, but on March 30, Judge Marrinan not only rejected the agency's requests but harshly criticized it for a “stunning” history of failing to comply with state laws designed to protect the environment.

Now, the Legislature is considering a bill to stop the DNR from enacting the judge's ruling, ceasing related water-use planning or restrictions on east metro communities and businesses.

The rationale, according to Sen. Roger Chamberlain, R-Lino Lakes, one of the bill’s sponsors, as stated to the Star Tribune, is that the judge's ruling stops citizens and local communities from managing their water.

If the bill were to become law, it’s unclear which directive the DNR would follow, casting a shadow of additional uncertainty over an already contentious issue.

FMR has long advocated for a more sustainable drinking water approach for the northeast metro: switching their primary community water supply systems to the abundant Mississippi River, while retaining existing wells as backup systems should river levels fall in the driest years. This is a far more sustainable, affordable and well-researched approach that addresses one of the main sources of the problem: the overpumping of groundwater.

Any decisions about the future of our groundwater and drinking water must meet our current needs without compromising future generations' ability to meet theirs. That’s the essence of stewardship.

Your voice is essential to our efforts to protect, restore and enhance the Mississippi River. From banning pollutants to passing strong rules to guide local riverfront development, many of FMR's victories are thanks to our strong base of advocates.

Sign up to become a River Guardian, and we'll email you when an important river issue arises and make it quick and easy to contact decision makers. River Guardians are also invited to special events, including happy hours, about important legislative and metro river corridor issues.

Join us for Water Action Day, May 2!

Help stop these bad environmental bills this session by joining us for Water Action Day!

Water Action Day is a day of public action and advocacy to let lawmakers know we care about our water. This all-day event will include free breakfast and morning briefings on Minnesota's water issues and how to actively engage with our legislators about them.