Good news, bad news in the fight to stop invasive carp (2019) | Friends of the Mississippi River
Skip to main content 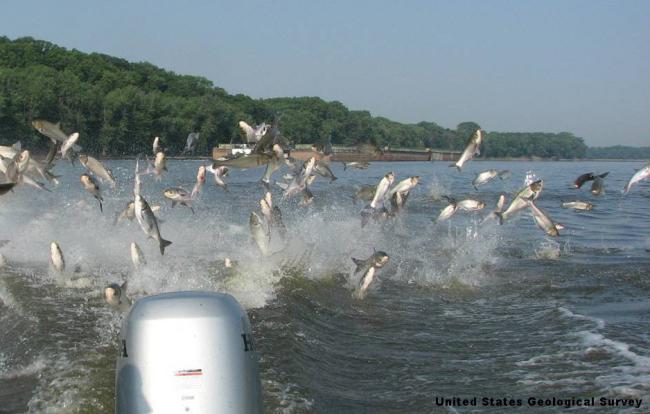 Silver carp, an invasive species that disrupts river ecosystems and creates a hazard for boating and other types of river recreation, doesn't yet breed in Minnesota. We're hoping it stays that way. (Photo by United States Geological Survey)

Bighead carp and silver carp, two species of invasive carp introduced from Asia in the 1970s to clean algae from fish ponds in the southern U.S., have been working their way upstream on the Mississippi River.

Once a population gets established, these fish are destructive and dangerous. Bighead carp can topple entire ecosystems as they consume copious amounts of plankton and other tiny aquatic life. Silver carp are also very excitable and can injure boaters when they jump from the water. Both species are seen as a major threat to Minnesota's rivers and lakes, and a promising effort by the University of Minnesota may be our state's last chance to stop them.

Due to extended periods of high water this summer, a whopping 12 invasive carp were found in the Mississippi and St. Croix Rivers in Minnesota this year.

High water makes it easier for the fish to migrate upstream as floodgates on the dams are often opened, allowing the fish to swim under or around the dams. A few of these invasive fish show up every year, but there's a growing concern that a breeding population could become established here — making it nearly impossible to stop their spread.

At present, the nearest breeding populations are approximately 50 miles south of the Minnesota-Iowa border. In spite of multi-state efforts to prevent or manage the spread of invasive carp, this "invasion front" has been creeping northward each year, damaging river ecology and recreation along the way.

So how do we stop what seems to be inevitable?

The Mississippi River watershed upstream of Minneapolis is protected, thanks to a decision by Congress in 2014 to close the Upper St. Anthony Lock. FMR and the Stop Carp Coalition played a major role in securing this landmark decision. St. Anthony Falls (i.e. the dam spillway) is too high for fish passage, so the closed lock creates the barrier needed to stop the carp.

Downstream of Minneapolis, the locks are too busy with commercial navigation to be closed and the dams are too low to create the needed barrier. While the upper Mississippi is protected, the Minnesota and St. Croix Rivers are still vulnerable to the invasion. Stopping invasive carp downstream is critical.

University of Minnesota researcher Dr. Peter Sorensen has been studying and developing an innovative system to block the spread of invasive carp. His team has installed a combination of deterrents at Lock #8 (the southernmost lock in Minnesota): Sound, lights and bubbles fend off the fish from the passage. Earlier attempts did not successfully deter invasive carp, but newer systems appear to prevent 90% of the invasive fish from breaching the lock.

You can read about the work of Dr. Sorensen and his team in a recent StarTribune article or take a deeper dive and learn about it on the Minnesota Aquatic Invasive Species Research Center's website.