Landslides are on the rise in Minnesota 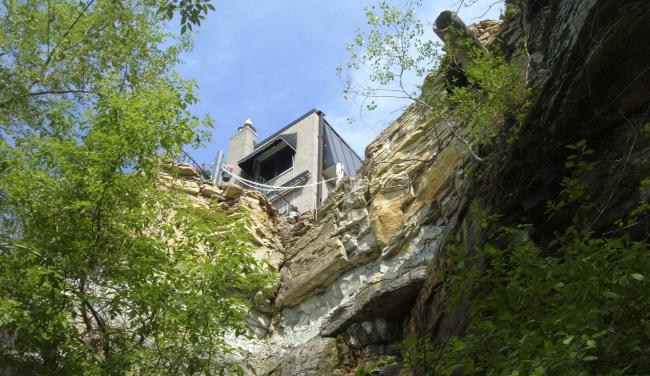 Building too close to the edge of the bluff, like this building in Lilydale, will increase erosion and can lead to landslides and rockslides.

As Minnesota's rainfall totals continue to add up this year, we're seeing more news stories about waterlogged farm fields, overflowing lakes and damaging landslides. Once considered rare and unusual, reports of chunks of falling rock — even entire hillsides sloughing into roads and rivers — have become much more commonplace.

Although bluff erosion along the river is a natural process, our choices and actions around blufftop development, stormwater management and climate change can exasperate the issue and put life, property and the integrity of the river valley at greater risk.

A map for landslide risk

The increasing danger of landslides has prompted Dr. Carrie Jennings and other state researchers to create what will be Minnesota's first comprehensive landslide inventory and map, with an expected completion date of June 2020.

To create the inventory, Jennings and her colleagues pore over old maps, news reports and other historic data, and conduct field surveys throughout the state, including along the Mississippi and Minnesota Rivers. After combing through the landscape and literature, the team will apply their extensive geologic knowledge to identify and describe areas prone to slope failure in the future. With careful analysis and good planning, some landslides can be prevented, or at least postponed indefinitely.

The landslide mapping project began a few years ago, when a landslide in Lilydale Regional Park killed two children on a fossil-hunting field trip. Since then, there have been several damaging slope failures in the metro area, including one that closed West River Parkway for more than a year. The most recent example of a landslide in Minneapolis happened in July along East River Parkway, just upstream of the Washington Avenue Bridge.

What you can do to prevent landslides

As the risk of landslides in Minnesota rises with changes to our climate, our communities can work together to prevent the damage that slope failure might cause to life, property and the beautiful bluffs that line the Mississippi River.

The road and trail closures that accompany these slope failures can be frustrating — even dangerous — for people, but they do draw attention to the growing risk of landslides. Earlier this year, FMR and local residents were able to convince the City of Lilydale to reduce bluff setback encroachments for a proposed senior housing project. FMR and many community members expressed strong concerns about bluff stability and potential future landslides based partly on its history of dangerous landslides in the past.

When landslides happen, remind your local elected leaders to protect the sensitive bluffs that line the metro Mississippi. Our leaders should enforce local rules and ordinances about structure setbacks from the bluffline, reduce impervious surfaces (like pavement) and overland runoff near bluffs, and consider open space protection in areas that are sensitive to slope failure.

Join the FMR River Guardians. We'll email you so you can act quickly online when the time is right. Plus you'll be invited to occasional special events like educational happy hours.

Read more from the river corridor land use and development blog.