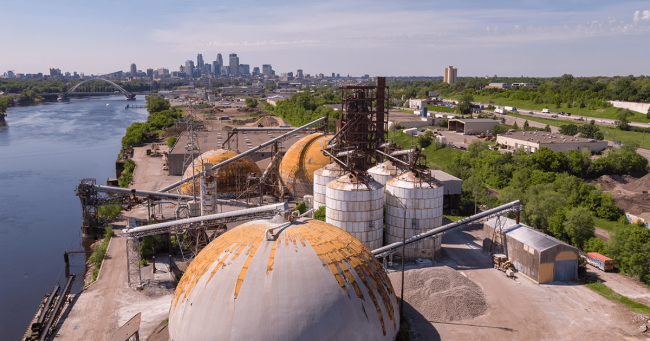 This fall, the Minneapolis city council is anticipated to vote on several key steps in the Upper Harbor Terminal (UHT) redevelopment process.

Over the past few years, FMR has raised many questions and concerns about the redevelopment plan for this 48-acre parcel of city-owned land on the North Minneapolis riverfront.

While the project plan has improved over time, its fundamental premise remains unchanged. We believe that the primary benefits of the project (and millions of dollars in public subsidies) will flow to a wealthy development team rather than Northside neighbors. Here's a quick video recap of the benefits and their costs:

Check out the full infographic here. (Illustrations by Kimberly Boustead and Emily Sauer)

The first vote is likely to be an approval of the project's environmental review: the Alternative Urban Areawide Review. Here's what to know about it and what to anticipate next.

An Alternative Urban Areawide Review is functionally similar to the better-known Environmental Impact Statement (EIS) but is used in large urban redevelopment initiatives where there might be several different projects in one geographic area. (The Highland Bridge redevelopment on the former Ford assembly plant site in St. Paul is one example of a metro project that used an AUAR.)

The environmental review process is overseen by the local government body that has the most decision-making jurisdiction over the project. At UHT, as in many cases, that power lies primarily with the city. The city controls zoning and development decisions; in the case of UHT the city also owns the land. Decision-makers are supposed to consult the AUAR for guidance as development proceeds.

Importantly, no binding decisions on a development plan should be made before the AUAR is complete. (The city of Minneapolis had to be reminded of this bedrock element of state law earlier this year when they attempted to vote on the UHT coordinated development plan before conducting the environmental review.)

Public comments are solicited at two points in the process. The first is when the draft project scope, describing what will be studied in the AUAR, is released. The second is when the draft AUAR itself is released. The finalized versions of these two documents must include written responses to the public comments submitted, but do not necessarily need to change in response to the comments.

Why is the UHT environmental review so important?

It's important to understand the context of the Upper Harbor Terminal project. The North Minneapolis riverfront area is rife with polluting industry and environmental disparities. The GAF shingle plant, Northern Metal recycling facility and I-94 are among the most infamous contributors to the neighborhood's poor air quality and high asthma rates.

Other community environmental concerns include noise, a disproportionate lack of green space and recreational facilities, and lead poisoning.

Given these existing pollution and environmental disparities around UHT, and the site’s presence in the city-designated Northside Green Zone, the AUAR ought to be conducted as comprehensively and transparently as possible.

If done well, the UHT development could actually improve some community environmental outcomes. It could incorporate renewable energy sources, nontoxic building materials and innovative stormwater treatment systems. New park space and trails could connect to existing residential areas near the site. Some of those things are expected to happen.

The city and development team could also choose to take a long-range look at reducing carbon emissions and climate change impacts through a variety of techniques ranging from solar-powered buildings to reducing auto dependency. The AUAR offers an opportunity to weigh the project's environmental impacts and consider these kinds of mitigation strategies.

Does the AUAR measure up?

In short, we don't think so. FMR, along with many other community members, submitted comments on the draft report. We don't believe that most of our comments and concerns were adequately addressed in the update.

Here are some of our key concerns:

FMR and several other parties asked the city to incorporate an analysis of climate change impacts. This could include a review of how anticipated traffic will contribute to carbon emissions, or whether buildings' energy use will prioritize renewable sources. The state does not currently require AUARs to include this, but the city certainly had the option to choose to add at least some analysis.

The state requires AUARs to consider the cumulative impacts of existing conditions, the project being studied and other future projects likely to occur in the area. We didn't think the city's analysis was strong enough in this aspect.

As one example of the city’s failure to fully consider cumulative impacts, the AUAR states that "year 2040 vehicle-related CO concentrations in the project area are likely to be lower than existing concentrations even considering the increase in development-related and background traffic."

We find this statement concerning for a few reasons. Statements like that make it seem that the city’s goal is "just don’t make things worse." This is not a high enough bar in a community already disproportionately burdened with environmental impacts. The city should be striving to improve environmental conditions for residents in this area, not just hoping to maintain the status quo.

And 2040 is 19 years away. Residents are suffering from poor air quality now. The AUAR should examine the more immediate impacts of the development, as well as what environmental impacts already exist and need remediation.

The city dismisses its own environmental regulations

Fewer than nine months ago, Minneapolis leaders approved the city's new Mississippi River Corridor Critical Area (MRCCA) ordinance. It's a strong ordinance meant to guide riverfront development in a way that preserves the river's ecological functions while enhancing public access to and enjoyment of the river.

Disappointingly, the UHT development proposal has long included buildings that exceed the height limits allowed in the ordinance. It appears that the city intends to hold the North Minneapolis riverfront to a lower design standard than it does some other riverfront neighborhoods.

We hoped the AUAR would include an analysis of whether these proposed buildings would meet the criteria for an exception to allow this excessive height: criteria that evaluate the potential impacts of the proposed building and whether these impacts can be mitigated. The city declined to fulfill our request for this, leaving that review to a building-by-building process later on that will include much less transparency and time for community input.

Is this the best we can do?

This isn't to say that the UHT development proposal is an environmental catastrophe. It isn't. From an environmental standpoint, the project could be more progressive and visionary. But it could also be worse.

Currently, this is an industrial site with restricted access. New parks and trails will add green, public riverfront space.

FMR's critiques of the project have long been more heavily focused on the economic impacts of the development and whether Northside residents will really be the ones to benefit most from this enormous taxpayer investment on a prime piece of public land — land over which we have more development control than we do privately owned properties.

It's precisely that public investment that should draw close scrutiny of whether the UHT project really meets the moment in which we find ourselves: a moment in which racial and economic inequality and climate change are interconnected crises that will both disproportionately impact BIPOC communities and low-income people.

The Minneapolis city council will review the AUAR within the coming weeks and may choose to make changes, such as recommending additional mitigation strategies or asking for more detail in certain sections of the report. The council vote on the AUAR is scheduled for September 10, 2021.

If the council votes to approve the AUAR, that opens the door to make other binding decisions on the project, such as contracts with the development team or community benefits agreements. It's tough to predict when enough of this work will be done that construction could begin.

Stay up to date

Photo above by Tom Reiter.