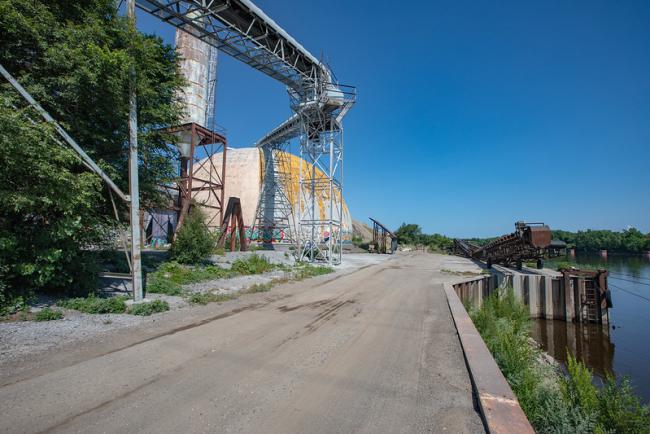 The city-owned Upper Harbor Terminal site, a former barge terminal located on a mile-long stretch of riverfront in North Minneapolis is being planned for redevelopment.

The Northeaster newspaper, which serves Northeast Minneapolis and surrounding communities, recently highlighted the resignation of two members of the Upper Harbor Terminal redevelopment collaborative planning committee and published a letter from the committee's chair echoing their concerns.

Cynthia Sowden's article discusses the recent resignations of Paul Bauknight (also an FMR board member) and Tessa Anttila, who left due to concerns that the committee prioritized the needs of developers over community members.

Made up of residents appointed by the Minneapolis mayor and city council, the advisory group, officially known as the Collaborative Planning Committee, has been meeting since July to review and advise on the development concept plan.

Bauknight and Anttila's resignation letter states that the project and planning process for this large city-owned site has been focused on real estate development, not community-centered development. They argue (and FMR agrees) that this will exacerbate wealth disparities and leave the community's social and economic needs unaddressed. Bauknight and Anttila state that when they have expressed these concerns, they're essentially dismissed as obstructionists.  (Read the full resignation letter here.)

The Northeaster article also quotes this blog's recent update, Why Upper Harbor Terminal Matters: "We believe that the plan is unnecessarily oriented towards driving wealth and benefit for the developers led by United Properties. United Properties is owned by the Pohlad family — one of the wealthiest families in Minnesota."

Letter from the chair

In addition to the article covering the resignations, the Northeaster also features a letter from Collaborative Planning Committee Chair Alexis Pennie.

"Taxpayers are being asked to subsidize a project that makes a few wealthy people wealthier while not delivering living-wage jobs, affordable housing or economic inclusion," writes Pennie. "City leaders should be required to explain to Northside residents why the city is choosing a private development scheme, abandoning its commitment to equity, and how this project came about with wealthy developers at the forefront, not community vision."

Given that the city of Minneapolis is pursuing state taxpayer funds to construct a First Avenue-operated concert venue, all Minnesotans deserve a response to these concerns.

The city is releasing an updated development plan in the coming weeks. FMR will keep sharing updates as the process continues.