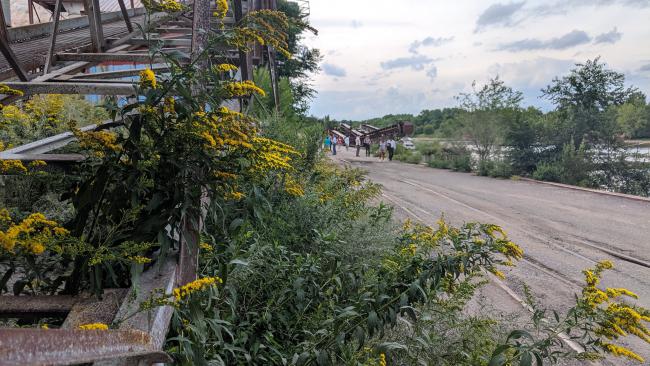 Community members on a recent visit to UHT were surrounded by signs that nature is regenerating itself on this mile-long riverfront industrial site. (Photo: Tom Reiter for FMR)

For over 20 years, FMR has been anticipating the redevelopment of the Upper Harbor Terminal (UHT), the former city-owned port on the North Minneapolis riverfront.

We were an active player the development of the Above the Falls Master Plan and have served on the Above the Falls Community Advisory Committee since its inception, we've been engaged in UHT planning for several years, and we even organized and co-sponsored with the city a design charette back in 2004 to help explore the site's future.

Now that redevelopment is coming, the FMR team has been spending a lot of time working with neighbors, community partners and city leaders to shape the plan. We've been open about where the city's current concept plan falls short. But we still get asked why we're so committed to and involved in the future of UHT, and why we think others should be concerned too.

Here's why this site matters and what you can do.

Setting the tone for future development

In recent years, riverfront land transitions in the Above the Falls area (North and Northeast Minneapolis "above" St. Anthony Falls) have been relatively modest. Heavy industry is making way for parks, housing and other uses, but mostly on fairly small parcels and at a slow pace.

At 48 acres, UHT is a pretty big site. We envision it as a domino or standard-bearing site. If UHT is a successful development, it will catalyze the sale and redevelopment of other neighboring parcels by driving up demand and land values while enhancing the area's infrastructure and amenities. This site is where we set the tone for the next 20 years of riverfront development.

As a river organization, we care about vibrant and livable riverfront communities where all people — not just a privileged few — can access and enjoy the river. So it's important to ask:  For whom will the Northside riverfront be redeveloped?

Several aspects of development will answer this question. When it comes to housing, factors like cost, the mix of rental and ownership, design and unit sizes all impact who can or will live in this new neighborhood.

The commercial aspects of development also play a role: the cost of retail or office space for business owners; the options and costs for dining, entertainment and retail; and the availability of amenities like a grocery store.

Jobs matter, too. Will the folks working at UHT earn high enough wages to affordably live in the neighborhood? Will the skills and experience required for these newly created jobs be well-matched to folks who already live nearby?

Infrastructure such as parks and open space, transit accessibility and bike and pedestrian connections also all influence development outcomes. Everyone deserves to live in great neighborhoods, but amenities can also drive gentrification if we're not intentional about counteracting market forces.

To put it more succinctly: Is the North Minneapolis riverfront going to feel like an extension of the Northside community, or of downtown's North Loop? UHT, as the first major redevelopment in this area, will shape what happens next. Given that UHT is such a keystone site, it's fortunate that it is city-owned. This gives the city of Minneapolis a lot of control over its redevelopment. The city can choose whether it sells the land or retains ownership, to whom the site is sold, and what conditions it wants to place on a land sale or redevelopment.

Right now, we believe that the city's leaders are choosing not to make the most of this significant and unique redevelopment opportunity. Rather than approaching it as a creative and transformative community development project, they've chosen to treat it more like a typical real-estate development process.

But the good news is that these city leaders are elected and should be responding to their constituents' concerns. And any sale of city-owned land requires a public hearing and a city council vote — opportunities for community voice and influence.

Future Above the Falls area redevelopments will likely offer less opportunity for community influence. When a private landowner sells to another private landowner, the city can't do much to affect that transaction. Cities can use zoning and policy to influence private development but control is much more limited.

This is another way in which UHT is an important catalyst: What happens at UHT will influence the market for surrounding privately-owned parcels, therefore impacting through market forces what can't be controlled through government intervention. This is a rare opportunity for the city to reduce rather than exacerbate gentrification.

If UHT exerts even more gentrification pressure in North Minneapolis, the community will be looking to future developments to respond to that problem... But those future developments will likely be private, making public intervention both limited and costly.

This is a critical, unique and time-sensitive opportunity to leverage the city's control of a public riverfront site to drive community benefits.


Upper Harbor Terminal is most-recognized for its dome-shaped silos. The site stretches along the river for roughly one mile from the domes upriver towards the Lowry Bridge and downtown Minneapolis.

Our commitment to equity

Much of this harm was systemically perpetuated by government agencies, including the city. On land stolen from Dakota bands through unjust treaties, the city built polluting industries and then separated this part of the riverfront from the majority of residences with the construction of Interstate-94. Redlining and racial covenants were used to limit African-American and Jewish residents' opportunities to live anywhere else.

While one 48-acre site cannot repair all of the injustices layered upon people of color (particularly black, indigenous and immigrant residents) and low-wealth communities, we believe it should move the needle in the right direction.

FMR's commitment to equity is rooted in our belief that the Mississippi River belongs to all of us and that its ecological, recreational, economic and social benefits should flow equally to all people in our community. And we don't believe that the city's current development concept for UHT delivers equal benefits.

We believe that the plan is unnecessarily oriented towards driving wealth and benefit for the developers led by United Properties. United Properties is owned by the Pohlad family — one of the wealthiest families in Minnesota.

The current concept plan doesn't include any clear path to living-wage jobs, housing affordable to current Northside residents (North Minneapolis' median income is less than half of the metro area's), or ownership and wealth-building opportunities for Northside residents of color.

We at FMR recognize that we have much work to do in our progress towards becoming a more equitable organization and a more just community. When we have the opportunity to stand in solidarity with neighbors fighting for a better development, to expend our financial and political capital in support of their vision, we need to respond.

In the case of Upper Harbor Terminal, we're advocating for a planning process that puts North Minneapolis residents' needs, goals, and aspirations first. The current process is centered around United Properties, who had been planning their project proposal for years before it entered the public eye and public process.

Because residents haven't had a genuine opportunity to plan the project, we can't say concretely what the project should entail. But through our many conversations with North Minneapolis residents, we've heard a few consistent themes about what they'd like to see here: a world-class riverfront park, deeply affordable housing, business ownership and homeownership opportunities that build wealth, and racial and economic equity. FMR will continue to advocate for these values.

For all of these reasons, Upper Harbor Terminal represents the opportunity of a lifetime. Will Minneapolis leaders let it slip through their fingers?