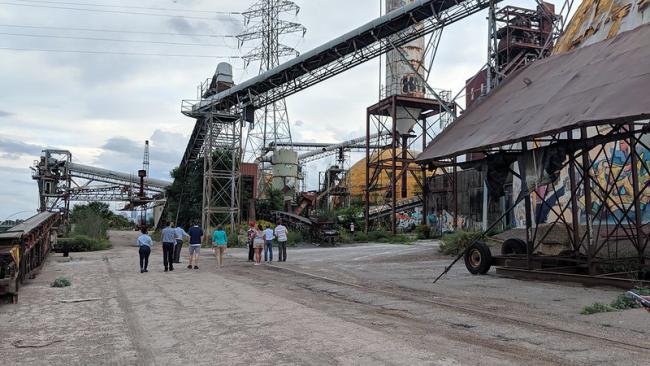 The 48-acre Upper Harbor Terminal site in North Minneapolis is being planned for a massive redevelopment. Community members visited the site this summer to consider its future.

Writing for the Star Tribune, Miguel Otárola provides an overview of the City of Minneapolis' request for $20 million in state bonds to support design and construction of the First Avenue amphitheater at UHT. The city has made this their top bonding priority for the 2020 legislative session, saying that the project will be an asset to the entire state by driving economic development and attracting national performing artists.

The article mentions some community members' "skepticism" about the project. We're right there with them. I'm quoted, explaining FMR's concerns about using taxpayer funds for the concert venue when we have so many outstanding questions.

Here's just some of the information about the project that hasn't been made public: what kinds of wages the venue's jobs will pay and whether this project will increase gentrification and displacement in North Minneapolis. Community members have told us that they'd prefer to see development with community-led planning, community ownership and wealth creation, and anti-displacement strategies embedded from the start. Another important question that hasn't received much attention: what will the facility's ownership structure be? If public funds are being sought to subsidize a private, for-profit business (First Avenue) how will the public interest in the project be protected?

If taxpayers are going to be investors in this project, then we deserve more information. We'll be following the proposal's progress this legislative session. Gov. Tim Walz did not include UHT in his proposed 2020 bonding package, but the House and Senate have not yet released their bonding recommendations.

MinnPost reporter Jessica Lee's in-depth article focused on Upper Harbor Terminal Collaborative Planning Committee members' concerns about the project planning timeline and process. FMR board member Paul Bauknight, who resigned from the committee due to these same concerns, is featured in Lee's article.

Bauknight says, “We continue to look at these big projects and say they’re going to make these big social and economic differences but … when we come back, we keep saying, ‘Well, things didn’t change'... There’s a lot of push, push, push, go fast here, and you can’t get to where we need to be, in my opinion, if you keep going fast.”

Planning committee members are also quoted as having ongoing concerns about the committee's decision-making authority, the lack of people of color leading the development team, and the potential impact of First Avenue's proposed venue (which could hold up to 10,000 concertgoers) on the surrounding neighborhood.

Media asked not to record or photograph meetings

At the January 22 Collaborative Planning Committee committee meeting, several journalists were present from Minnesota Public Radio, MinnPost, and the Star Tribune. Committee members requested that they neither record nor take photos of the meeting.

After the journalists tried to explain that this was a clear violation of Minnesota's open meeting law, one photographer chose to leave rather than escalate the situation.

Miguel Otárola covered the issue for the Star Tribune and interviewed me. I'm not a committee member, but I attend the meetings to stay informed and share updates on this blog and @UHTSpotlight for others who care about this high-impact riverfront redevelopment.

This is not the first time committee members have objected to meetings being recorded or photographed; the issue has been raised several times since the committee started meeting in July 2019. A Fox 9 news reporter was asked to stop recording under similar conditions on December 11, 2019.

At the January 22 meeting, committee members voiced distrust of the media due to systemic issues of bias, misrepresentation, and a lack of people of color in the media profession.

Committee members, the majority of whom are people of color, noted that their communities are often reported on in ways that are misleading and derogatory. One member stated that media presence reduced the level of deliberation and discussion members felt comfortable having in the meeting.

These concerns are all valid, and the systemic issues members raised should not be ignored. Nevertheless, the committee charter is clear that the meetings are subject to the state's open meeting law.

What I find most distressing is that city representatives — including several city staff and local councilmember Phillipe Cunningham who attends most of the meetings — sat silently, essentially allowing members to advocate for violations of the open meeting law not only on January 22 but whenever members questioned the media's right to record or photograph in the past.

Instead of offering a point of clarification when it was needed, they sat idly. But after the issue emerged in the public sphere, the city reassured the media that they would remind committee members of their responsibilities per the follow-up Star Tribune article.

Transparency is critical to a planning process such as Upper Harbor Terminal, which involves a large parcel of desireable, publicy-owned riverfront land along with public funding (including proposed state bonds for First Avenue's concert venue).

With so many unanswered questions and concerns about the project, city leaders should be making every effort to welcome community members and the press to be part of or have access to this public planning process.