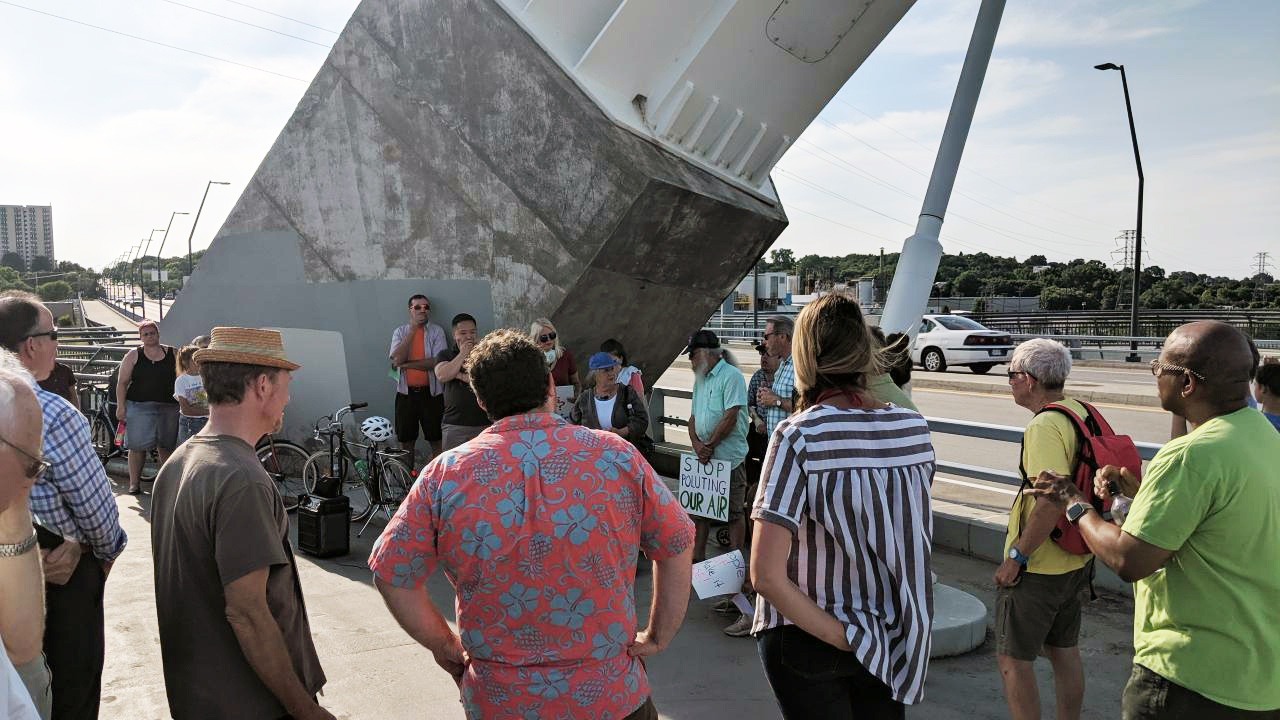 FMR staff participated in a rally on the Lowry Avenue Bridge near Northern Metal Recycling on August 1, the day its shredding operations were supposed to cease — but didn't.

August 1 was going to be a great day for North and Northeast Minneapolis residents: That was the long-awaited date by which Northern Metal Recycling was supposed to shut down its metal shredder on the North Minneapolis riverfront as a result of a 2017 settlement with the Minnesota Pollution Control Agency.

Instead, on August 1 we gathered together on the Lowry Avenue bridge to protest a judge's ruling that Northern Metals could continue shredding operations because its new plant in Becker, Minnesota wasn't yet ready.

The ensuing weeks have been a wild ride, including whistleblower allegations that Northern Metals altered pollution control data. Through it all, Northern Metals kept right on polluting.

The settlement that finally shut down Northern Metals

Due to the whistleblower allegations, on September 23, Northern Metals finally agreed to shut down its metal shredder as of that day and pay a $200,000 fine to the Minnesota Pollution Control Agency (MPCA).

In the settlement, Northern Metals also admitted that it altered readings from its pollution control equipment on several occasions to show lower levels. While the shredder is now shut down, Northern Metals will continue other operations at its riverfront site.

The MPCA may reopen the permit for Northern Metals' new facility in Becker to further investigate the company's operations. The attorney general's office is also looking into Northern Metals and might recommend that the city, county or federal government pursue criminal charges.

Was this latest settlement enough?

It's great that Northern Metals has finally stopped polluting the air along the North and Northeast Minneapolis riverfront. But it's disappointing that this latest round of negotiations between Northern Metals and the MPCA didn't result in any reparations for area residents.

They're the ones that have suffered for years due to Northern Metals' actions and who have shouldered the impact of the delayed shutdown, the falsified record-keeping and the additional air pollution. They're the ones who continue to bear the disparities in river access as Northern Metals and other industrial sites occupy prime riverfront parcels.

Northern Metals has stated that its metal shredder brings in $10.5 million in revenue each month, which is about $350,000 per day. The $200,000 fine levied by the MPCA represents little more than a half-day's revenue for Northern Metals, while its shredding operations persisted nearly two months past the original August 1 closing date (which the company agreed to in 2017).

The North Minneapolis ZIP code around Northern Metals (55411) has the highest asthma hospitalization rate in the Twin Cities. The neighborhood surrounding Northern Metals has one of the state's highest rates of children affected by lead exposure.

Health disparities for residents around Northern Metals, on both sides of the river, are significant. That's especially true for low-income households and people of color. And while there are many contributing factors, air pollution like that from Northern Metals has a well-documented impact on asthma, lead exposure and other health issues.

We encourage the attorney general and other authorities to investigate Northern Metals to the fullest extent possible. Should criminal charges result, area residents should be the first to directly benefit from any settlements or penalties.

We're grateful to the North and Northeast Minneapolis residents who have led the fight against Northern Metals for many years. Without their hard work, courage and brilliance, Northern Metals would undoubtedly still be polluting the Mississippi riverfront.

While we still have a long ways to go in reclaiming the Above the Falls area riverfront as a healthy place for people and parks, we need to celebrate every success. Northern Metals' shutdown is not a complete victory, but a victory nonetheless.

Tags:
Land Use & Planning
FMR Updates
Above the Falls