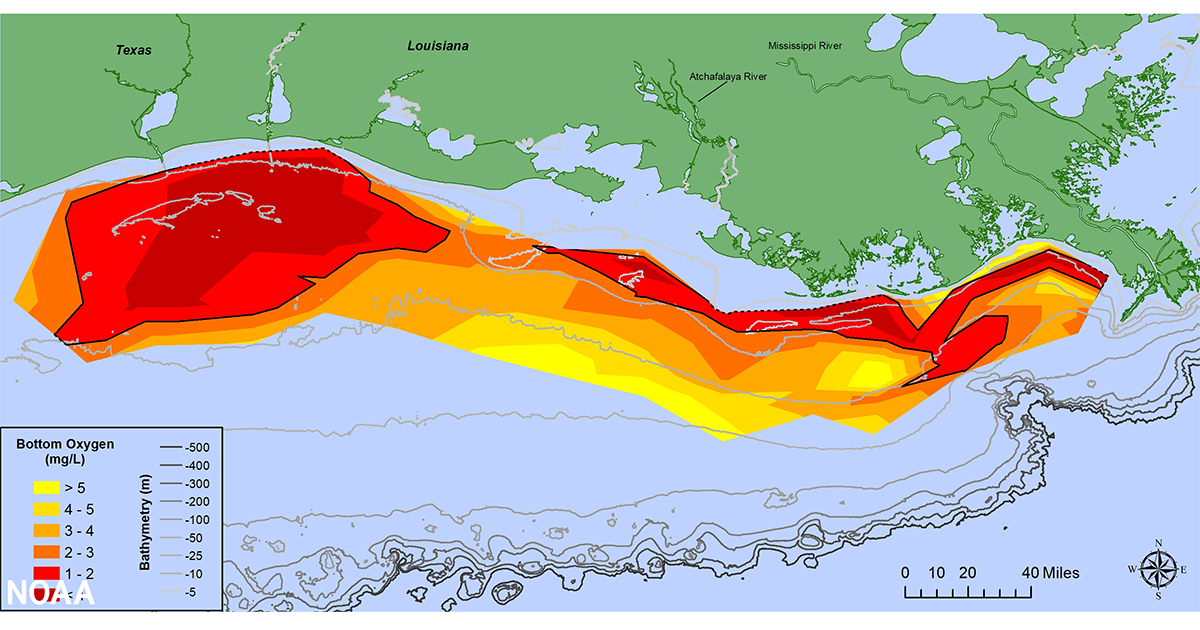 The dead zone in the Gulf of Mexico is three times bigger than it "should" be. (Image: Map of measured Gulf hypoxia zone, July 25-31, 2021 from LUMCON/NOAA)

The annual Gulf of Mexico "dead zone" is the yearly manifestation of our rough treatment of the Mississippi River basin. Runoff pollution from 31 states collects in the Great River and flows out into the Gulf, where it creates a giant "anti-habitat" — a place where little to no fish or marine life can survive.

Earlier this year scientists had predicted that the dead (or "hypoxic") zone would be significantly smaller than average. Since runoff is, of course, correlated with precipitation levels, it would stand to reason that our parched summer would have at least that slim consolation. Unfortunately, the needle swung the other direction entirely: heavy June rains in much of the central and southern basin, along with warming ocean temps and other factors, have resulted in a larger than average hypoxic zone: 4 million acres, which is bigger than the state of Connecticut.

The only way to restore the Gulf's natural vitality is to change our habits in the Mississippi basin, and the best approach by far is to create more "continuous living cover" on our agricultural landscapes. By doing so we can turn farmland from a fundamentally "leaky" system to one that more closely mimics the tight-knit qualities of natural grassland, holding back the excess fertilizer that drives aquatic algae growth.

FMR's work with the Forever Green Partnership is based on the belief that we can make it profitable and sustainable for farmers to adopt continuous living cover practices, both here in Minnesota and throughout the full run of the river.

Matt Rota of Healthy Gulf, a New Orleans-based nonprofit, has a front-row seat for the Gulf of Mexico dead zone, and he points to the recent introduction of the Mississippi River Restoration and Resilience Initiative as a key pathway for securing this buy-in: "This legislation would create a Federal office focused on the health of the Mississippi and would include significant funds dedicated to nitrogen and phosphorus pollution that feeds the dead zone."

"We can't keep doing the same thing," says Rota. We agree! It's time for a new approach — and with time, a flourishing river.

How can I help?

The best way to help make MRRRI a reality is to sign our MRRRI petition. This is your opportunity to let federal lawmakers know you stand with the river.

In addition, FMR will be reaching out to FMR River Guardians and others over the course of the next year, urging them to reach out to their members of Congress to ask them to support MRRRI.

Sign up to be a River Guardian to receive email action alerts when we need your help the most, plus invitations to educational happy hours and other events.