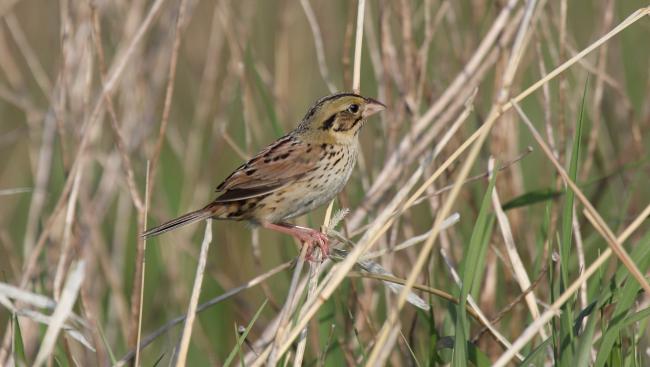 The Henslow's sparrow is one of the many bird species our FMR breeding bird surveys found on prairie restoration sites. (Photo by Dominic Sherony, CC BY-SA 2.0, link)

We didn't pay Minnesota Public radio to write that headline, but it's exactly the message we'd love to spread far and wide.

Too often when we think of protecting wildlife, colorful stories pop to mind, like endangered whooping cranes following a plane to learn their migration route. Such efforts are important and worthy of support, but so is the less camera-friendly work of land protection and habitat restoration.

As Mike Moen points out in "Land conservation key to bringing back Minnesota bird population" both farms and urban areas are expanding, often squeezing out bird habitat.

His article focuses mostly on the impact of farm growth. As farms expand in the state, more pesticides are applied, leading to fewer insects. That means there's less food for birds. Land conversion is one of the drivers of the decline of birds making the news throughout the nation, after a recent Science article estimated the decline of our bird population to be roughly three billion birds since 1970.

The story points to precision farming as a ray of hope. Through the most efficient use of farmland, we can increase yields in some areas and potentially leave marginal lands to return to a more natural state, benefiting birds and other wildlife. The precise and highly targeted application of pesticides and fertilizers also reduces wildlife exposure to such chemicals, either directly or indirectly via the food chain.

At FMR, this article has inspired some interesting water cooler chats (so to speak... we drink tap water) about our own work related to birds and agriculture.

Naturally, our land conservation and restoration sites provide much-needed bird habitat. For example, at one site, William H. Houlton Conservation Area in Elk River, we've been able to track changes in bird populations as we transform a farm field into a prairie.

While the site was home to rows of soybeans, a grand total of seven bird species were present. During our most recent survey, there were over 19 bird species, including song sparrows and great crested flycatchers.

The replacement of row crops with perennial plants also benefits the river, annually preventing 17 dump trucks' worth of soil from eroding into the Mississippi, which runs along the edge of the field.

At the capitol and throughout Minnesota, FMR's water program staff advocate for more perennial plants on farm fields and other practices to reduce river pollution by holding the soil (and nutrients and pesticides) in place. Many of the clean-water crops that we advocate for also provide pollinator and bird habitat ... all while turning a profit for farmers.

If we want to save birds, we'll have to look at the interplay of all the systems and ways we manage our land, their habitat.

City and suburban residents aren't off the hook; all of us can help control major bird killers like cats and window design. For more information, check out tips from 3 billion birds or this American Bird Conservancy fact sheet.

And if you're not one already, you can help local and migratory bird populations by being an FMR volunteer, advocate or member: