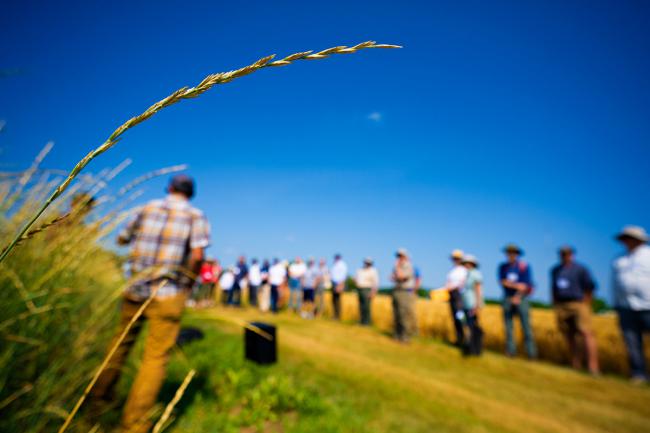 Two bills proposing investments in clean-water crops are already making their way through important committees at the Legislature with support from both sides of the aisle. (Photo: Dodd Demas)

The 2022 session of the Minnesota Legislature is in full swing, and two of FMR's priorities are off to a fast start!

With the announcement of a $9.3 billion state budget surplus, our elected representatives have a chance to put real muscle into filling many of Minnesota's pressing social and environmental gaps. At the very top of our list is helping our agriculture sector transition to a truly sustainable, healthy and profitable future, protecting our waters in turn.

Introducing new crop breeds is hard — and expensive — work. Scientists' salaries, lab equipment, field machinery, farm support and all of the other must-haves for such a program can add up to millions of dollars a year, but a successful breed can make those expenditures look like a bargain, especially when the goal is to create crops that provide public benefits like clean water. We can decide: Is it better to spend a smaller amount of money to avoid a problem, or to spend more (via costly municipal water treatment systems) to fix the damage?

For the past few years, the state has supported the Forever Green Initiative with roughly $2 million in funding per year. This investment has paid off, but it still doesn't meet the program's needs, meaning that we're making progress more slowly than we need to be. FMR believes that the current budget surplus is the perfect opportunity to make up for that shortfall, and we are working with our colleagues in the Forever Green Partnership to make the case.

House File (HF) 3625, a bill sponsored by Rep. Ginny Klevorn (DFL-Plymouth), would do just that. In line with the House Climate Action Caucus action plan, HF 3625 sets an ambitious target of $20 million in total spending across five years. Rep. Klevorn, a staunch believer in Forever Green, crafted the bill to provide both a crucial upfront capital investment (to purchase equipment) and longer-term funding for ongoing research.

The House Agriculture Finance and Policy Committee held a hearing on Rep. Klevorn's bill on February 28, welcoming testimony from a broad range of supporters including Dr. Nicole Atchison of PURIS Foods (a leading plant-based protein company based in Minnesota), farmer Ben Penner, farmer Richard Magnusson, and Dr. Don Wyse and Hannah Stoll from the University of Minnesota.

On March 9, the Senate Agriculture Committee heard their version of the measure, Senate File (SF) 3711, sponsored by Senator Gary Dahms (R-Redwood Falls), with expert testimony from Dr. Wyse, Dr. Steven Rosenzweig of General Mills, Inc., and Dominic Jones, who is the mayor of Windom and also runs the Red Rock Rural Water System.

Also on the docket at both the House and Senate hearings was the second of FMR's priority bills: House File 2720, sponsored by Rep. Todd Lippert (DFL-Northfield), and Senate File 3271, from Senator Torrey Westrom (R-Elbow Lake), which would help grow the industry that will ultimately get clean-water crops from farm fields to grocery store shelves.

Kernza, camelina and other continuous living cover (CLC) crops can do all the good in the world, but without a robust market to sell into, farmers won't be able to grow them profitably — which means most won't be able to grow them at all. Rep. Lippert has been working with several up-and-coming Minnesota businesses to jump-start this market, aiming to reduce startup costs for crop processors, distributors and producers of consumer goods that use CLC crops.

Such "value chain" enterprises are as crucial to the larger CLC ecosystem as the farmers and scientists are, but they've been largely left to fend for themselves up till now. By spending state dollars to support them now, we can reap big benefits down the line — in terms of acres planted, jobs created and tax revenues gained.

FMR has helped to lead a coalition in support of the measure, and our friends at the Land Stewardship Project, Minnesota Farmers Union, Minnesota Environmental Partnership and the Forever Green Initiative have also done plenty of heavy lifting along the way.

Next step: Hashing out the differences

In recent years the Senate has tended to be the more conservative of the chambers when it comes to budget decisions. This session, we are lucky to have two influential lead authors in Sen. Westrom and Sen. Dahms, who are the chairman and vice-chair, respectively, of the Ag Committee. Alongside stalwarts Rep. Klevorn and Rep. Lippert (and the numerous co-sponsors from both sides of the aisle), this bipartisan support is a heartening development and speaks volumes about the "big tent" vision for continuous living cover.

Later this spring, all four bills will be debated one last time by a "conference committee" that includes members of both chambers. This is a negotiation to work out differences between the bills and agree on funding levels, so we'll need to keep the drumbeat going and ensure that conferees remember that this is a shared priority outside of the typical partisan wrangling.

As a farmer, Ben Penner told the House in his testimony, "With your support we can create new opportunities for farmers, entrepreneurs and businesses while achieving our economic and environmental goals through a market-based solution and suite of forward-looking crops. If there ever was a win-win, this is it."

Thank you to the River Guardians who took the time to contact your representatives on these committees last week!

Sign up to become a River Guardian, and we'll let you know when important river issues like this arise. We make it quick and easy to contact decision-makers and make your voice heard. River Guardians are also invited to special events, including happy hours, to learn more about important legislative and metro river corridor issues.

Check out the full slate of FMR's legislative priorities.