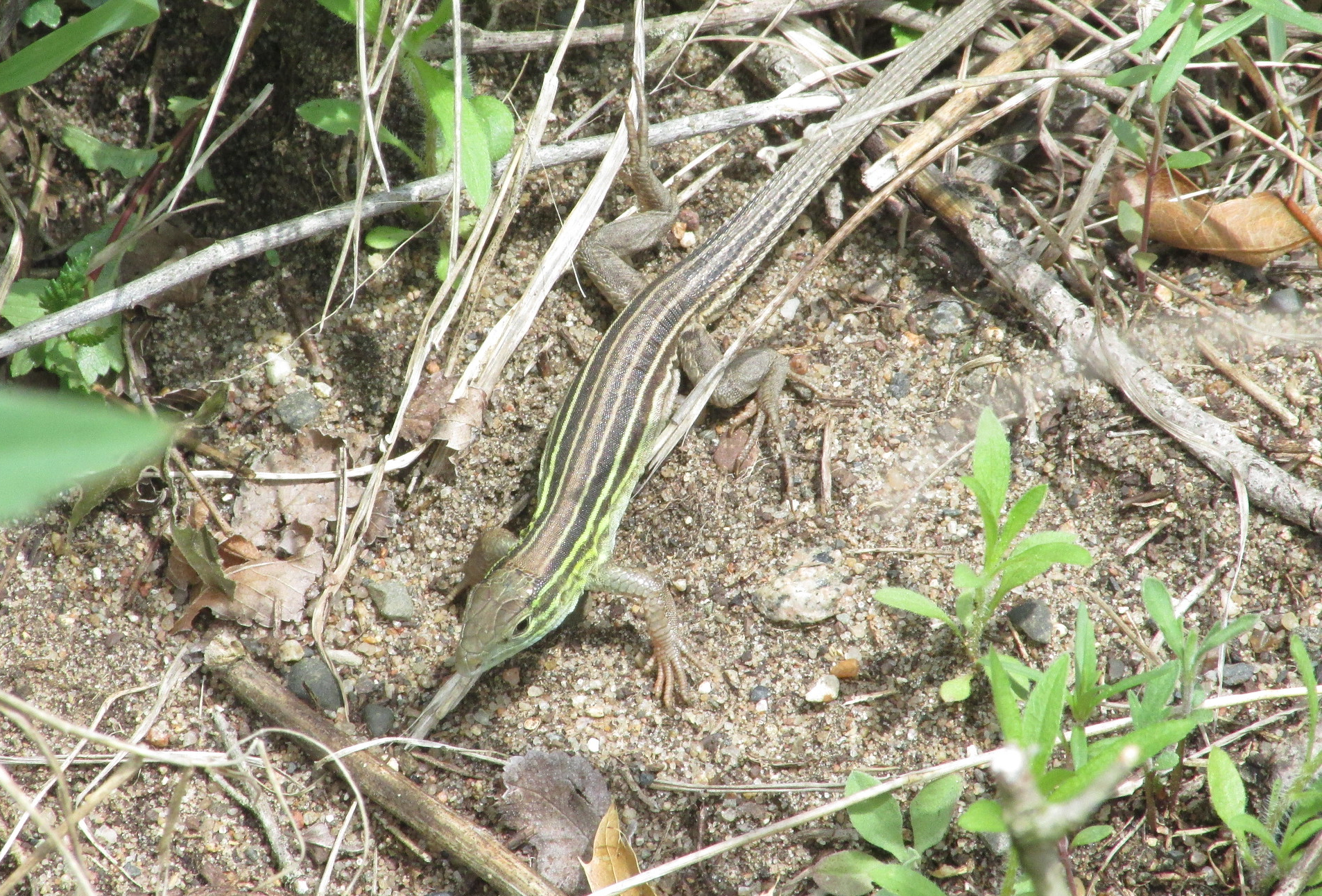 A racerunner lizard at the Flint Hills Resources site. Photo by Christopher Smith for FMR.

Summer is the best time to see some of Minnesota's more unusual animals: Its lizards.

The first occurs in just four locations around the state. We'll focus on the other two, which can both be found along the Mississippi River, sometimes at the same location. 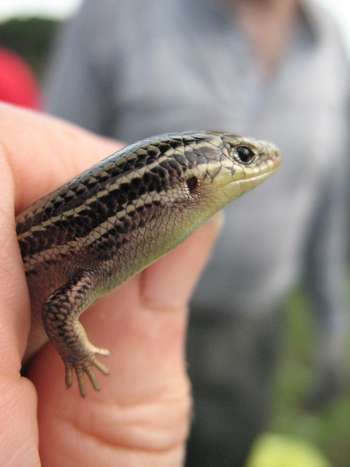 This prairie skink was found at a summer 2009 volunteer knapweed removal event at Pine Bend Bluffs Scientific and Natural Area.

The prairie skink (family Scincidae) is common throughout most of the state except the northeast, while the racerunner (family Teiidae) is only found in seven counties along the Mississippi River from the metro to the Iowa border. Both species inhabit sandy goat prairies — prairie openings found on wooded south-facing slopes.

Catching a glimpse of one of these lizards is a rare treat, especially as temperatures increase:  The warmer the temperature the faster they run! Racerunners live up to their name and have been clocked at speeds of 18 m.p.h. Their speed is largely aided by their very long tails, comprising nearly two-thirds their total length. One study showed that without a tail their speed was reduced about 35 percent.

The best time to see either the prairie skink or racerunner is typically midday, but they will seek shelter on very hot days. Young individuals tend to be seen most often, as they move about in search of a permanent abode. Adults may stay close to their shelter and let their prey come to them.

If anything (or anyone) attempts to catch these animals, they'll be left with a wriggling tail as the rest of the lizard scampers free — a unique defense mechanism to evade predators. A shorter tail will grow back. However, it takes a few weeks and the lizard is more vulnerable to attack during this time. 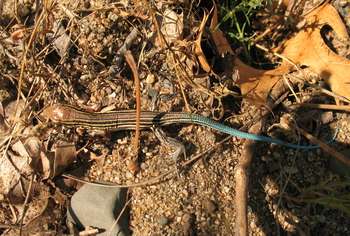 This prairie racerunner was found in an area FMR is helping to restore — a sand-gravel prairie at Flint Hills Resources along the Mississippi River bluffs. Its blue tail means it's a young one, born earlier this year.

Both skinks and racerunners dig burrows they they use to escape predators and heat as well as for hibernation, which begins in September.

Prairie skinks emerge from their dormancy in late-April while racerunners typically emerge in May. After mating and 40 days gestation, skinks lay up to 10 eggs in small excavations under logs or rocks, while racerunners lay about six eggs in the sand. Racerunners do not tend the eggs, but female skinks will maintain vigil, rarely leaving the egg clutch even to eat.

Eggs hatch after about 40 days, typically in August. Hatchlings are about 1 1/4 inches long and are independent. In addition to their smaller size, young lizards can also be recognized by their bright blue tails, which indicate that they're still in their first year. They reach sexual maturity in their third year, and their lifespan is expected to be about four or five years.

According to Jeff LeClere, all three species of Minnesota's lizards eat small invertebrates such as crickets, grasshoppers, beetles, spiders, and caterpillars, which they chase down and eat. They mash their food up with their strong jaws before swallowing it. Prairie racerunners are voracious and may consume larger prey items, especially at higher temperatures. However, there is one food source they apparently abhor: ants.