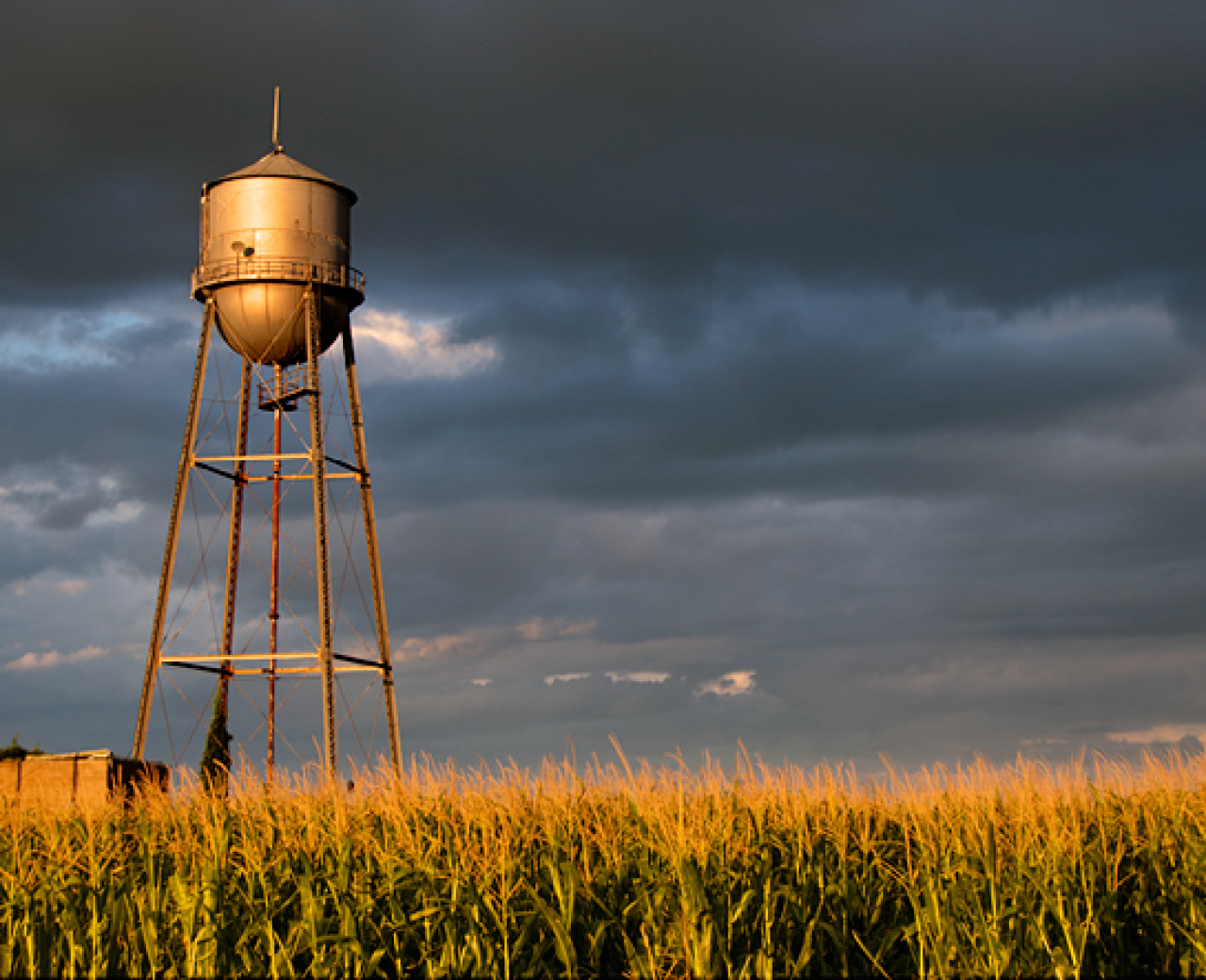 Annual crops planted in rows, like corn and soybeans, are treated with nitrate fertilizers that are increasingly ending up in Minnesotan's drinking water. (Photo by Weekly Grist, Joe Dempsey.)

We can all agree that clean, safe drinking water should be accessible and affordable for everyone regardless of geography or income. Sadly, that’s not the case for many Minnesotans.

Nitrate used in cropland fertilizer is a leading source of drinking water contamination in Minnesota. Although essential for plant growth and health, excess nitrate harms aquatic life and human health and drives the formation of the “Dead Zone” in the Gulf of Mexico. It's also extremely costly to Greater Minnesota communities.

That’s why FMR is working with our conservation allies to strengthen a new Nitrogen Fertilizer Rule – one of the few places in state law where regulators can require row-crop farming operations, the biggest source of nitrates, to reduce pollution to our waters.

Despite decades of efforts, many of which are volunteer-based, Minnesota has made little to no progress in preventing nitrate used in cropland fertilizer from impacting our drinking water sources. The new proposed nitrate rule drafted by the Minnesota Department of Agriculture is a rare opportunity to make a significant difference in this pervasive issue.

Unfortunately, the proposed draft rule falls woefully short of protecting our rivers, lakes and drinking water, and could even make it more difficult to restore polluted drinking water in the future.

Nitrates by the numbers

Before we dive in, here are a few numbers to exemplify the scale of this problem.

According to the State of Minnesota:
• 537 public water supply wells across the state have elevated nitrate levels.
• Nearly 10 percent of private wells in geologically vulnerable areas (including places with sandy soil) are already above the Health Risk Limit of 10 mg/L.
• Detection rates and nitrate levels are increasing in many parts of the state. [1]
• 85 percent of shallow groundwater samples have detectable levels of nitrate contamination. [2]

Nitrogen fertilizer sales have increased 15 percent over just the last five to six years in Minnesota [3], and new research suggests that changes in precipitation patterns alone will increase the amount of nitrate being delivered to surface waters by an average of 19 percent nationally and as much as 24 percent in the corn belt through this century.[4]

The 1989 Groundwater Protection Act established the state goal that "groundwater be maintained in its natural condition, free from any degradation caused by human activities."

For agricultural chemicals including nitrogen fertilizer, implementation of the act is directed by the Minnesota Department of Agriculture. Until now, the MDA’s attempts to reduce nitrate pollution have centered only on voluntary adoption of "Best Management Practices." However, the act clearly states that if such voluntary measures prove insufficient to achieve the act's goals, the MDA has authority to adopt mandatory requirements. Given the state of our groundwater and drinking water supplies, clearly, it's time for the MDA to adopt more effective solutions.

The Minnesota Department of Agriculture is proposing to develop a 2-part rule to address excess nitrate pollution to groundwater. Unfortunately, the proposed draft rule undermines the basic goals of the Groundwater Protection Act, fails to protect most groundwater resources, and makes it virtually impossible to compel polluters to protect drinking water.

The first part of the rule restricts nitrogen fertilizer applications in the fall or to frozen soils in areas of the state overlying vulnerable groundwater. FMR strongly supports this but we believe it should be expanded to apply statewide without exception.

There is no agronomic reason to apply fertilizer to frozen ground, and row-crop farms that apply fertilizer in fall typically pollute more (and have lower yields) than those that spring apply.

The second part of the Minnesota Department of Agriculture's proposed rule unreasonably limits the application of the Groundwater Protection Act to drinking water resources instead of all groundwater. Were the act called the "Groundwater Used as Drinking Water Protect Act" FMR would not object, but that's not the case.

FMR feels strongly that the MDA has a responsibility to apply the law based on clearly established legislative intent:  The agency should redraft the rule to apply its authority to prevent groundwater contamination regardless of whether or not a groundwater resource is used for drinking water.

Where the draft rule does apply, it fails to meet the act's goal to prevent groundwater degradation. Instead, the MDA proposes to implement restrictions only after our groundwater has already become contaminated. Mitigation is not prevention. This approach is clearly incompatible with the clearly stated non-degradation goal of the Groundwater Protect Act. The Nitrogen Fertilizer Rule should be re-drafted to address and protect groundwater before it becomes polluted rather than after.

When drinking water is contaminated the second part of the draft rule spells out four levels of intervention. While the first two are designed to be purely voluntary, levels three and four are intended to have some real teeth. Unfortunately, there are no teeth to be found.

The draft rule states that level three and four regulatory actions are only considered after at least 10 to 15 percent of private wells in an area have nitrate levels greater than the Health Risk Limit and less than 80 percent of farms self-certify that they are using Best Management Practices or BMPs.

This approach is dangerously unwise. The rule essentially prevents the state from solving a serious public health issue because an arbitrary percentage of farm operations have self-certified that they're adopting "best practices" — the same practices that the MDA itself has acknowledged as insufficient to meet the goals of the Groundwater Protection Act [5] and were never intended to prevent drinking water contamination. [6]

FMR has respectfully requested that the rule be revised to remove BMP adoption rates as a consideration for mitigation criteria. If community and private wells are unsafe for consumption, the MDA has a responsibility to deploy regulatory intervention wherever appropriate.

The draft rule's primary flaw is its reliance on adoption rates of nitrogen fertilizer recommendations — guidelines that were crafted to maximize profit, not groundwater and drinking water protection.

As noted above, the MDA is proposing to prohibit level three and four regulation based on adoption rates of "best practices" that were never intended to prevent drinking water contamination. They were created to help farm operations maximize profit, even at application rates the state acknowledges will lead to extremely high concentrations of nitrate in farm runoff.

For example, the University of Minnesota Extension's “Best Management Practices for Nitrogen Use in South-Central Minnesota," recommends on page two that “Maximum Economic Return to N” or MRTN rates are used to calculate the economically optimal fertilizer application ratio. In the example used, the MRTN rate was found to be spring-applied at 120 pounds per acre. But Table 2 of that same document concludes that the recommended spring application of nitrogen fertilizer at 120 pounds per acre would yield nitrate loss at concentrations of 13.7 mg/l — a level well above the state’s Health Risk Limit.

The MDA itself has acknowledged this on several occasions:
• The Minnesota Department of Agriculture’s 2015 Nutrient Fertilizer Management Plan (NFMP) notes that these nitrogen BMP recommendations focus on managing the “• agronomic risk", and that other risks such as environmental and societal risks are not accounted for. [8]
• The NFMP also states that "…in areas with highly vulnerable groundwater, the use of nitrogen fertilizer at the recommended rate, timing, source and placement…may not be enough to decrease the amount of nitrate leaching into groundwater to meet water quality goals." [9]

Another area of concern in part two of the rule is that access to any of the (modest) protections appears to be based on inclusion in the MDA’s “Township Testing Program” — leaving many private well owners outside the realm of protection. Participation in the testing program appears to remain at the MDA's discretion; we are not aware of a clear pathway for communities to petition for inclusion.

FMR has requested that the MDA clarify a process for communities to self-select for program participation, and account for such a process when administering the rule moving forward.

Even if the draft rule was modified to better protect our drinking water it calls for an alarmingly slow pace of implementation. The rule prescribes a lengthy evaluation process that could take multiple three-year cycles before elevating a community to level three or level four mitigation. Requiring such a time-consuming and expensive multi-step process simply to further encourage farm operations to apply fertilizer at their economically optimal rate wastes time, money and community goodwill.

FMR does not support the MDA's assumption that Minnesotans who cannot safely drink their water (or who can reasonably anticipate future contamination of their drinking water) will be satisfied with the proposed slow-walk approach to a serious local public health risk.

The draft Nitrogen Fertilizer Rule comes up short — to the potential detriment of public health and economic growth in rural communities. We can do better.

We look forward to working with the Minnesota Department of Agriculture and all water quality stakeholders to revise the current draft to better protect groundwater resources for all Minnesotans as required by the 1989 Groundwater Protection Act.

If you'd like to be notified of opportunities to take action on this and other important water quality issues, sign up to be an FMR River Guardian!

[3] Minnesota Department of Agriculture. 2017. Working together to address nitrate in groundwater.

[7] ”Greatest yield and profit with a minimal increase in NO3-N concentration was found with the spring-applied 120-lb N rate.”