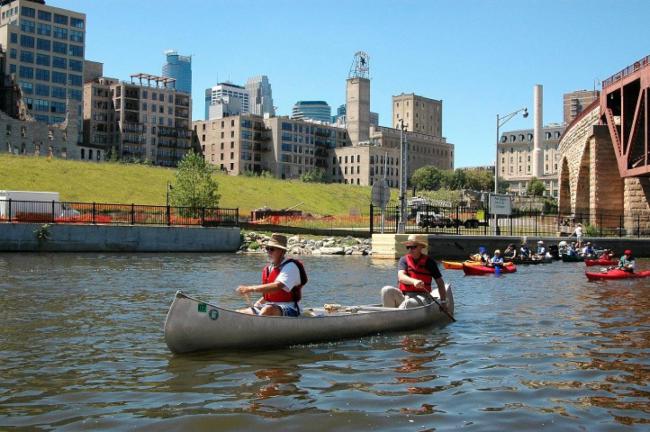 You can help protect birds in Minneapolis!

Minneapolis is about to adopt a new Mississippi River Corridor Critical Area (MRCCA) ordinance. This is an exciting milestone that will bring new development standards and environmental protections to our city’s riverfront.

Minneapolis’ draft ordinance has a lot of strengths, but we’d like it to be better for the birds. Join us in asking the city to require bird-safe building materials and lighting in new developments along the Mississippi River — a critical migratory flyway for up to 40% of the nation’s birds.

Public comments on the draft ordinance are being collected through October 9th. We’ve made it easy to submit comments to the city using this form.

Your comments don’t need to be long or technical; just focus on what you love about the Mississippi River and what your protection and development priorities are.

Want to learn more about the Mississippi River Corridor Critical Area ordinance? There are several ways to do that:

What has Minneapolis proposed?

On the whole, we’re pleased with Minneapolis’ draft MRCCA ordinance; it reflects a high degree of value for the river as the vibrant heart of the city. And it thoughtfully balances dense urban development with protection for the river’s recreational, scenic, ecological and cultural functions.

As one of the first (out of 25) metro-area cities to adopt its MRCCA ordinance, Minneapolis will set a strong example for other cities and townships. This will help the entire Twin Cities riverfront be more consistently managed as an asset for all residents.

FMR believes that dense urban development is critical to addressing climate change. However, dense development can still include science-based provisions that reduce harm to wildlife and promote safe passage for species with whom we share this land.

The state of Minnesota already incorporates these specifications into its B3 Guidelines for state-funded projects. FMR recommends that Minneapolis require adherence to the same specifications for all new buildings constructed within the Mississippi River Corridor Critical Area.

Other cities with bird-safe design and/or materials requirements for some or all new buildings include New York City, Toronto, San Francisco, Oakland, California and Madison, Wisconsin.

Not a Minneapolis resident?

Minneapolis is among the first to adopt its MRCCA ordinance, but there are 24 more cities and townships to come.

Check out our full list to see when they'll begin their work. Or sign up to become a River Guardian and we'll let you know when your city’s work is underway.