The tail of the prairie skink: A story of loss and restoration | Friends of the Mississippi River
Skip to main content

The tail of the prairie skink: A story of loss and restoration 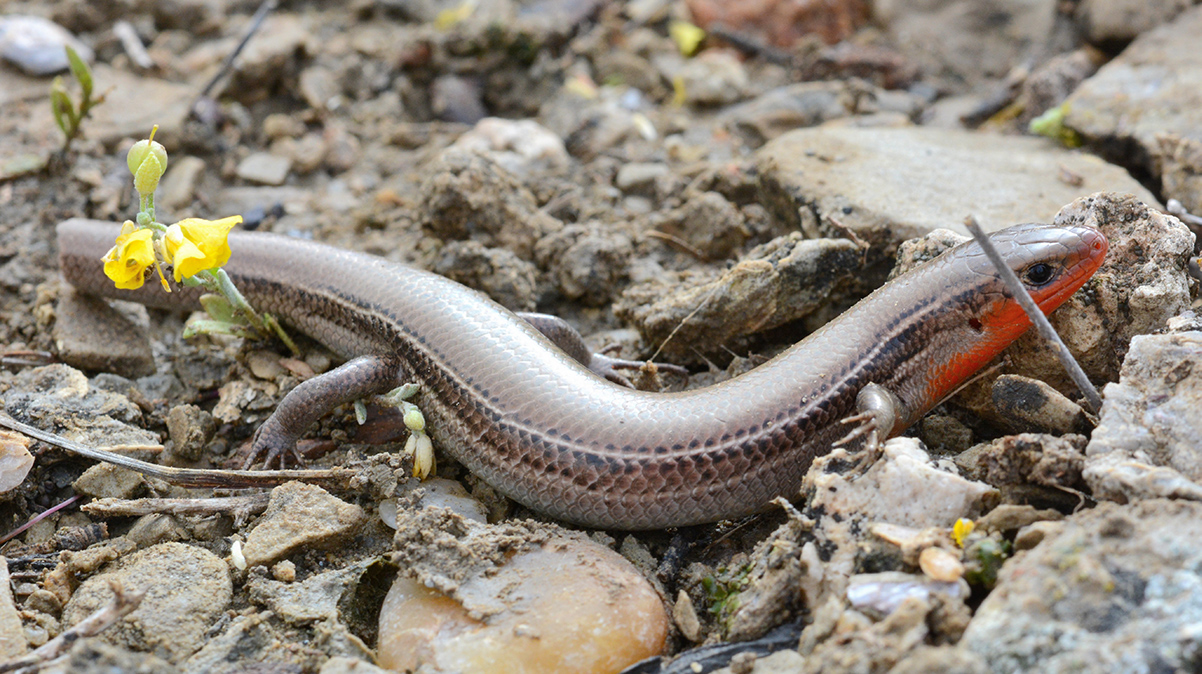 The prairie skink can lose and regrow its tail. Through our restoration work, we're hoping to create a story of regrowth for its favorite habitat: prairies near streams. (Photo by Andrew DuBois: Prairie Skink; CC BY-NC 2.0)

The northern prairie skink (Plestiodon septentrionalis) may be Minnesota’s most common lizard, but habitat fragmentation could threaten its survival.

Prairie skinks live in sandy prairies and open grasslands, often near water and vegetation that offers shelter and basking spots.

In Minnesota, only a little over one percent of our native prairie remains. FMR is working to restore quality habitat for the wildlife that makes the prairie their home.

No surprise: prairie skinks do well in prairies

We’ve found prairie skinks at four of our restoration sites, including the William H. Houlton Conservation Area on the banks of the Mississippi in Elk River, where we're converting much of a 347-acre former farm back to prairie.

If you visit Houlton or any of our other restoration sites in the summer, you might find one of these tiny lizards. Here’s how to know you’re looking at a prairie skink.

The life cycle of a skink: blue tails, orange throats, and stripes throughout

Adult prairie skinks are roughly 5-9" long, with three tannish-brown stripes and two narrow black stripes running the length of their back.

Prairie skinks emerge from hibernation in late April. Shortly, males will display a bright orange coloring around the throat and mouth to signal to potential mates.

After mating and a 40-day gestation period, skinks lay up to 10 eggs in small excavations under logs or rocks, and female skinks remain with their eggs, rarely leaving the clutch even to eat. Eggs hatch in August, and young lizards can be recognized by their bright blue tails that fade over time.

After three years, skinks will reach sexual maturity and begin mating. Come September, skinks dig burrows below the frost line and hibernate until the following spring.

If it’s sunny, look down!

These cold-blooded lizards need sun to warm their bodies. Consequently, the best time to see them is near midday on clear, sunny days.

Young individuals tend to be seen most often, as adults may stay closer to their shelters or egg-laying sites.

Why you shouldn’t pick up a skink

Like other lizard species, skinks have the unique defense mechanism of losing their tails to evade predators. The cast-off tail continues to wiggle, distracting predators and giving the skink a chance to bolt.

While a shorter tail will grow back, skinks are more vulnerable to predation during this time. (So if you find one, let them be!)

What’s next in this tale?

We’re excited that our restorations are providing habitat for these species and encouraging their population growth. To see what happens, we’ll continue our surveys at the Houlton conservation area for the next few years. You'll be able to read all about it here on our conservation blog.

Our wildlife surveys are funded in part by contributions from SEA LIFE and our members. Thank you!