Think twice before removing that thistle 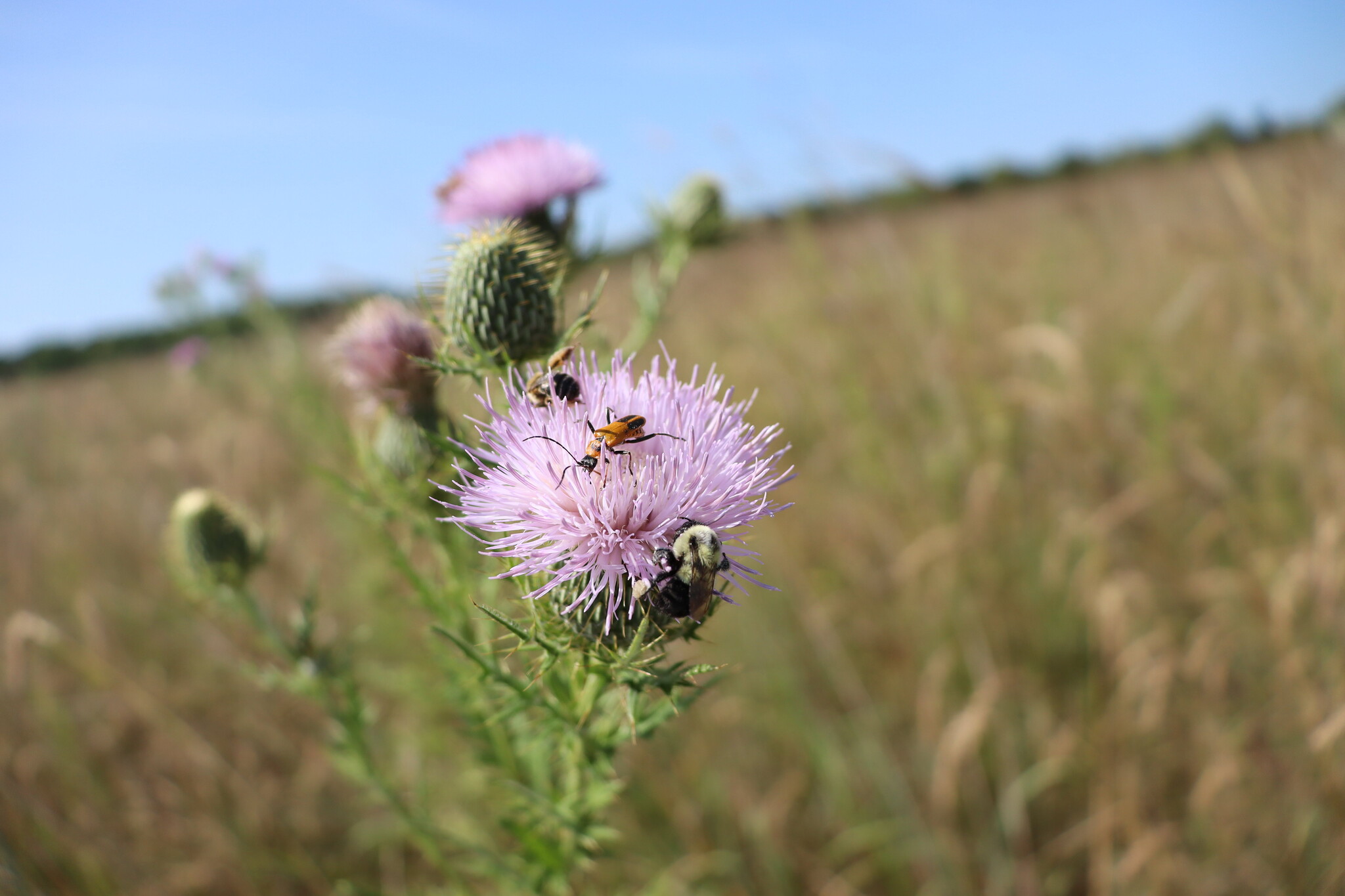 A common eastern bumblebee, goldenrod soldier beetle and European honeybee all forage on the flowerhead of a field thistle (Cirsium discolor) at the William H. Houlton Conservation Area in Elk River. (Photo by Kiley Friedrich)

Thistles are some of the most maligned species in the plant world. Almost no one seems to like them, and it's easy to see why. Their formidable spines and prickles limit the ability of many herbivores to eat them. Those same prickles can look downright scary and cause most people to steer clear too. Who hasn't been pricked by a thistle while walking through a field or while pulling the plants (even with thick gloves!) at an FMR volunteer event?

Invasive thistles aren't the only thistles

Minnesota has its share of invasive thistles, those that spread rapidly through disturbed sites and thrive along roadsides and habitat edges. Indeed, quite a few of the plants on Minnesota's noxious weeds list are thistles. The agriculture and restoration communities constantly struggle to prevent species like Canada thistle, musk thistle and bull thistle from limiting crop yields and dominating restorations. 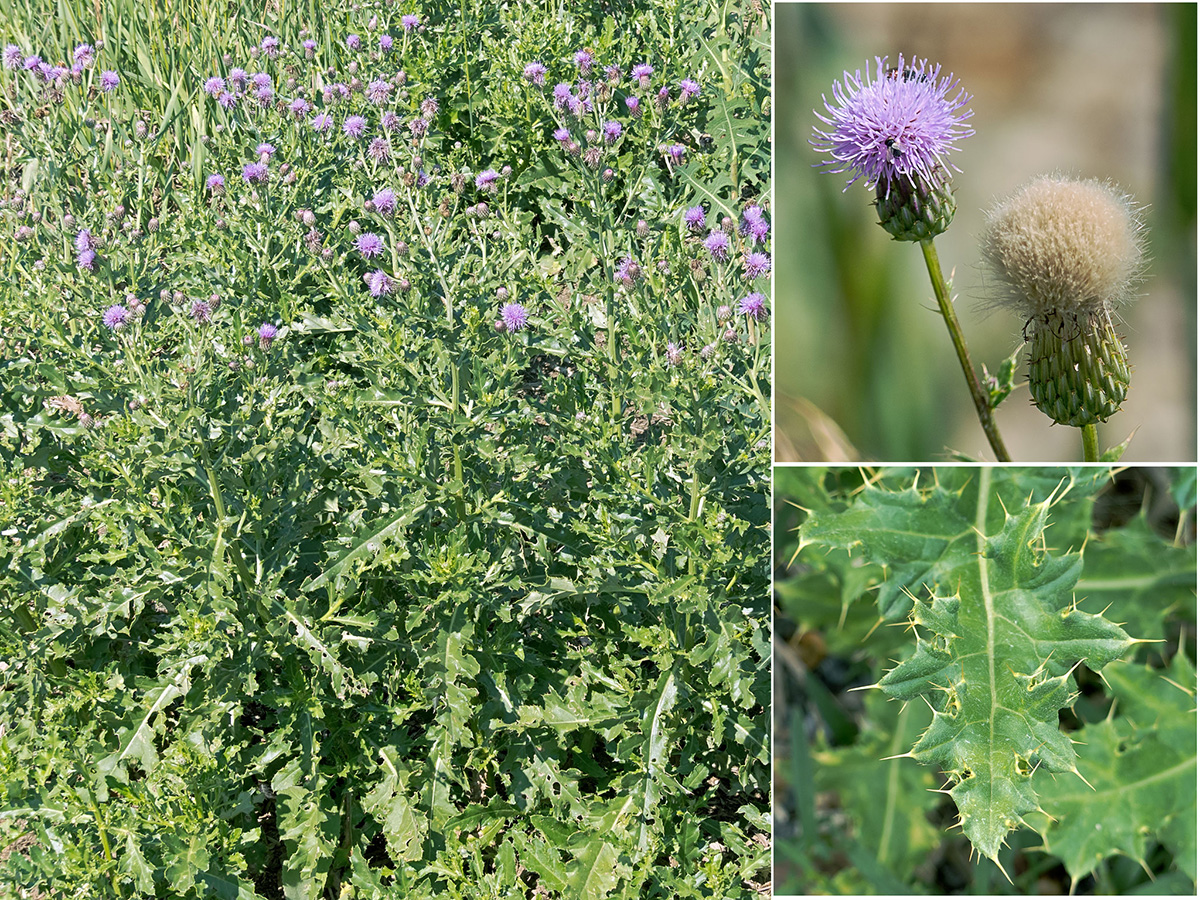 Exacerbated by their experience with Canada thistle and an unfamiliarity with the differences between thistle species, people tend to lump all thistles into the category of "bad plant." They tend to think that if it's a thistle, it should be removed before it spreads and creates a problem.

There are actually five native thistle species in Minnesota. These species have existed in Minnesota's prairies and wetland for centuries and are common, yet balanced, components of these plant communities.

Species like field thistle, Hill's thistle, Flodman's thistle, tall thistle and swamp thistle can be found throughout the state in various habitats. Because many are biennials, meaning they have a two-year life cycle, they can seem to pop up all at once, leading many to worry that they're beginning to take over a site. But they don't tend to outcompete other native plants and will likely be far less abundant the following year. In fact, they provide many important habitat benefits.

Whereas Canada thistle often only grows between 1 and 4 feet tall, some of our native thistles tower over their prairie and wetland counterparts, growing as tall as 7 feet tall (field thistle) and 10 feet tall (the aptly named tall thistle). Their height difference makes these two native thistles valuable, especially in prairie systems, where they can provide varied habitat structure important for birds and insects. 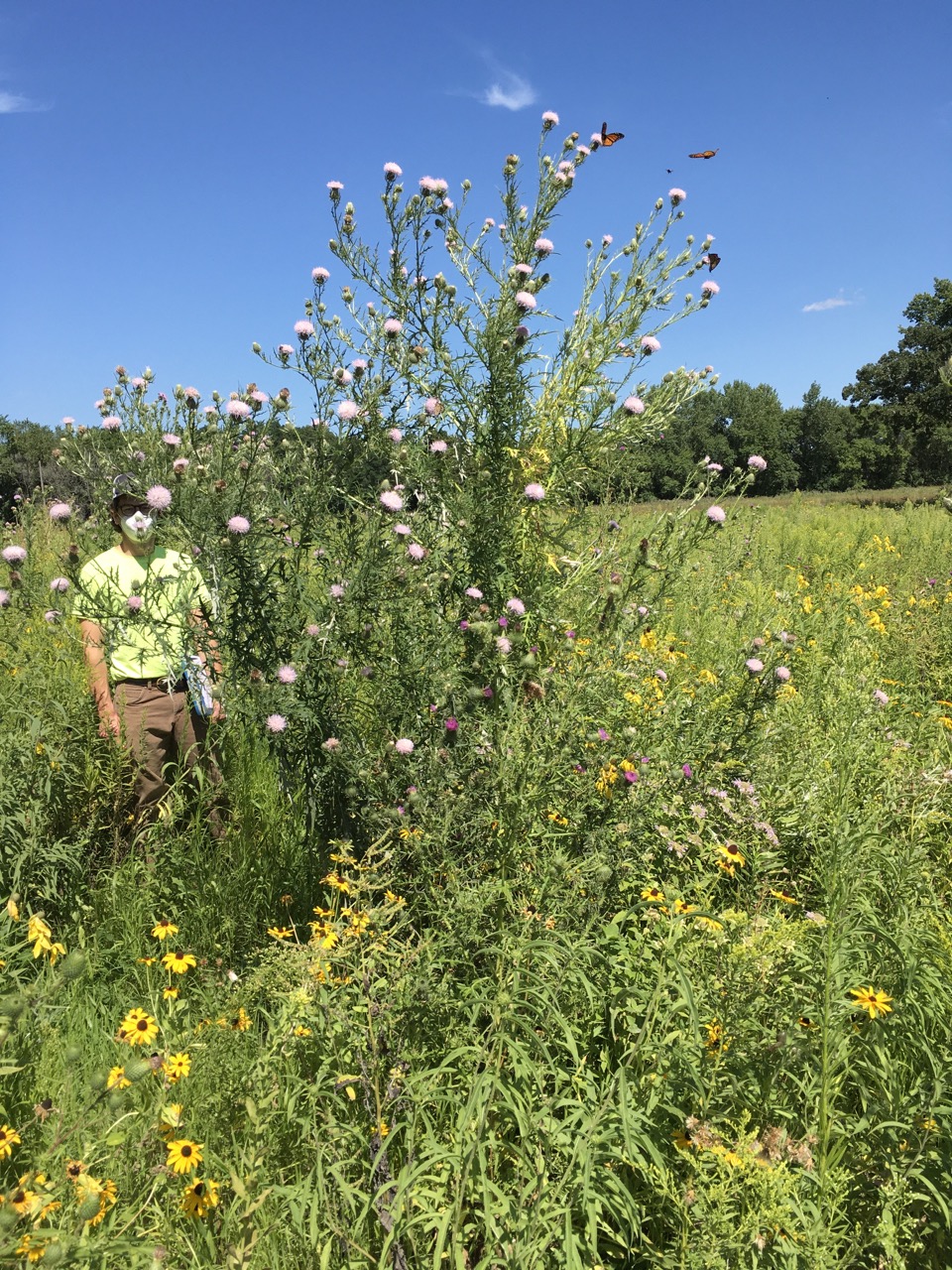 Many grassland birds use thistles for perching and resting. By flowering above even the tallest grasses, birds and pollinators are easily able to see and reach their flowers and seeds.

Our native bees use all thistles for nectar and pollen, and various bird species eat the seeds produced by thistles' large flower heads in the fall. While that includes the more invasive species such as Canada thistle, their ability to form monocultures and crowd out the myriad other plant species used by pollinators and other wildlife outweighs their role as a pollen and nectar source. 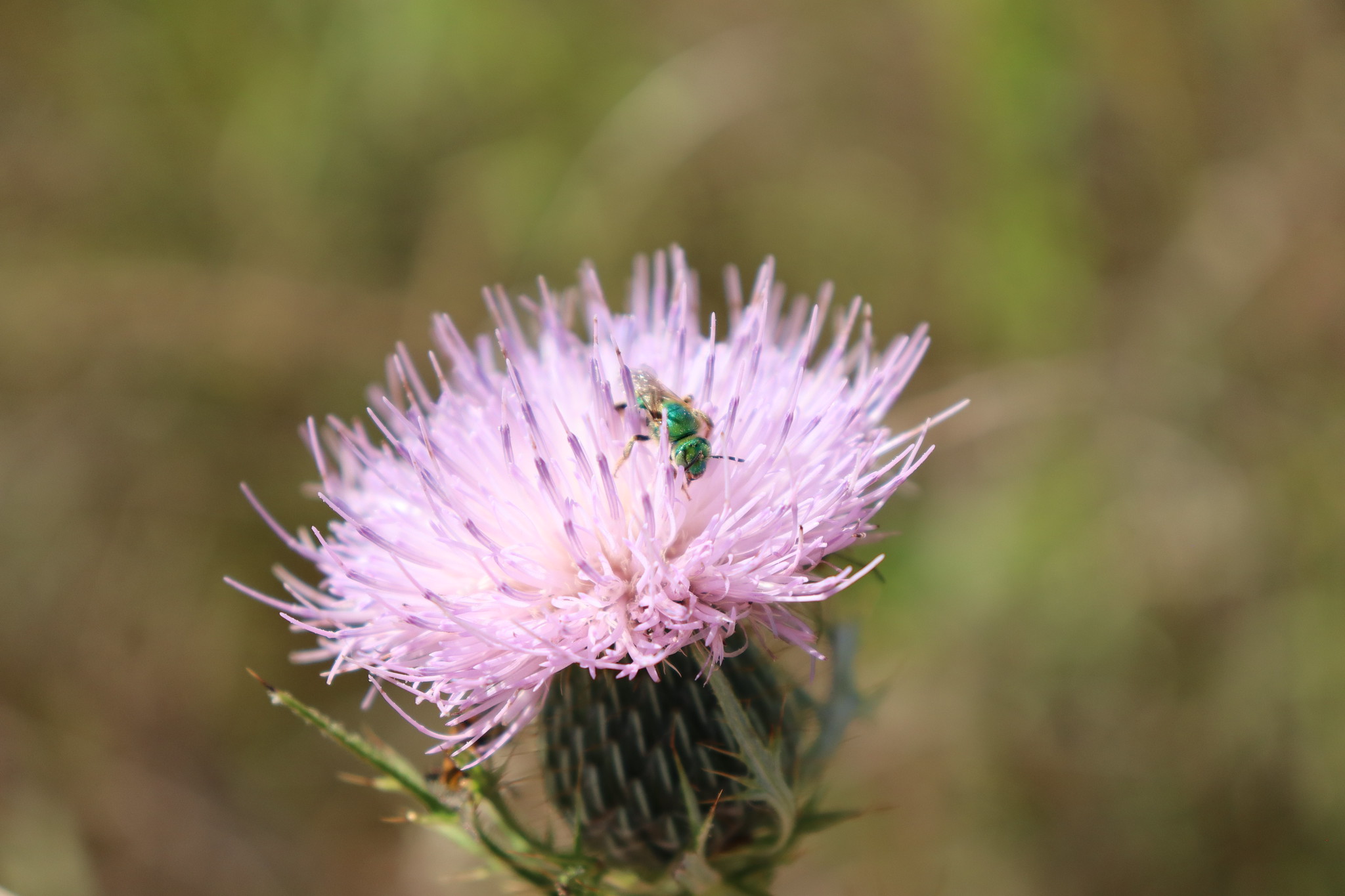 How can you tell the difference between native and invasive thistles?

It takes a discerning eye to differentiate between Minnesota's native thistles and some of their more invasive relatives. In some cases, you'll need to get up close. So if you've stumbled upon a thistle, how do you tell the difference? Here are two questions to guide you:

Is the underside of the leaf bright white and not a dull green? You may have a native thistle on your hands! Can you actually touch the plant — the stem, the leaf, etc. — without recoiling in pain? That's another indicator that the species might be one of Minnesota's five native species.

Of course, if you're still unsure, you can use a plant identification app like Seek or Google lens to help. Or you can check out this Xerces Society guide to native thistles.

So before you yank that thistle out of the ground in the name of stewardship, it might be worth a second look to make sure you're not unintentionally doing more harm than good.

Want to help us restore habitat across the metro? Volunteer with us to pull invasive plants like Canada thistle and support habitat-making plants like our native thistles. 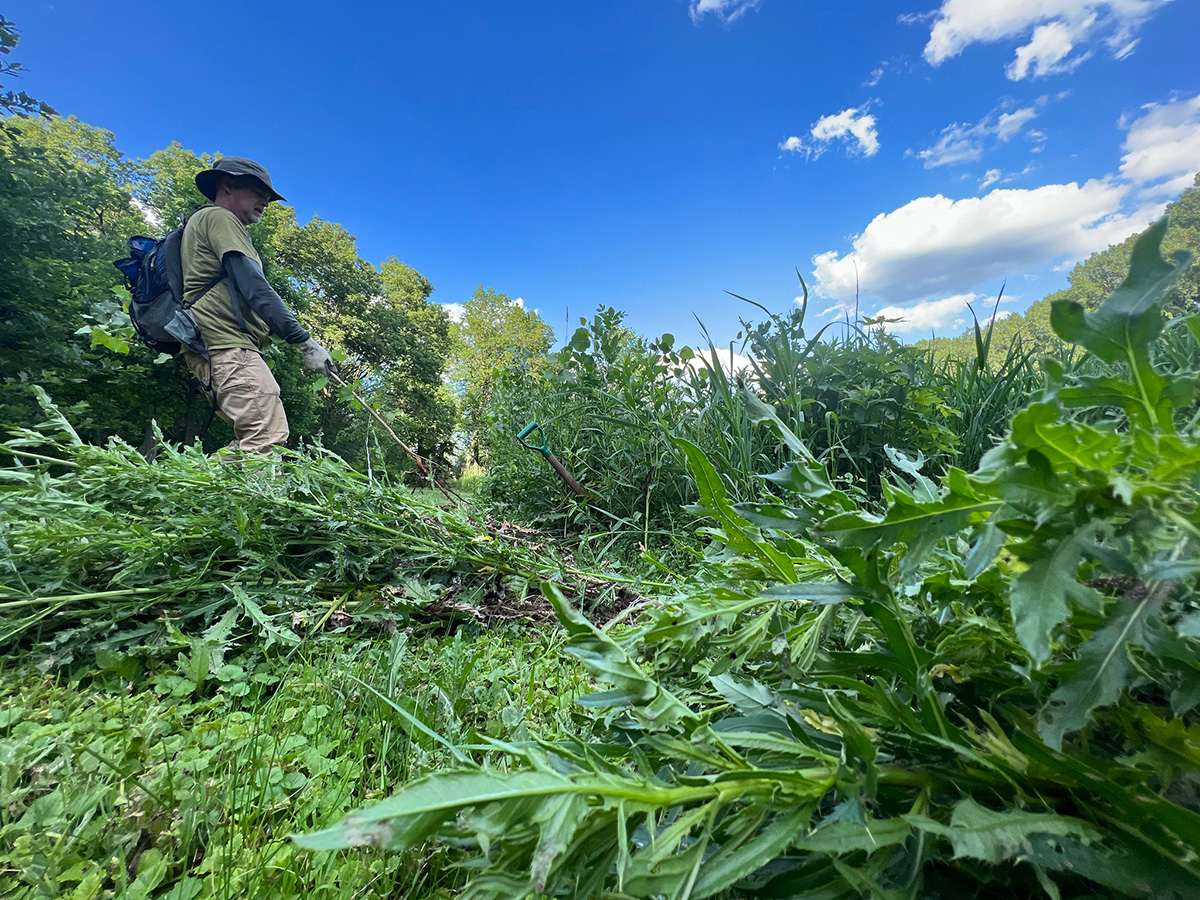