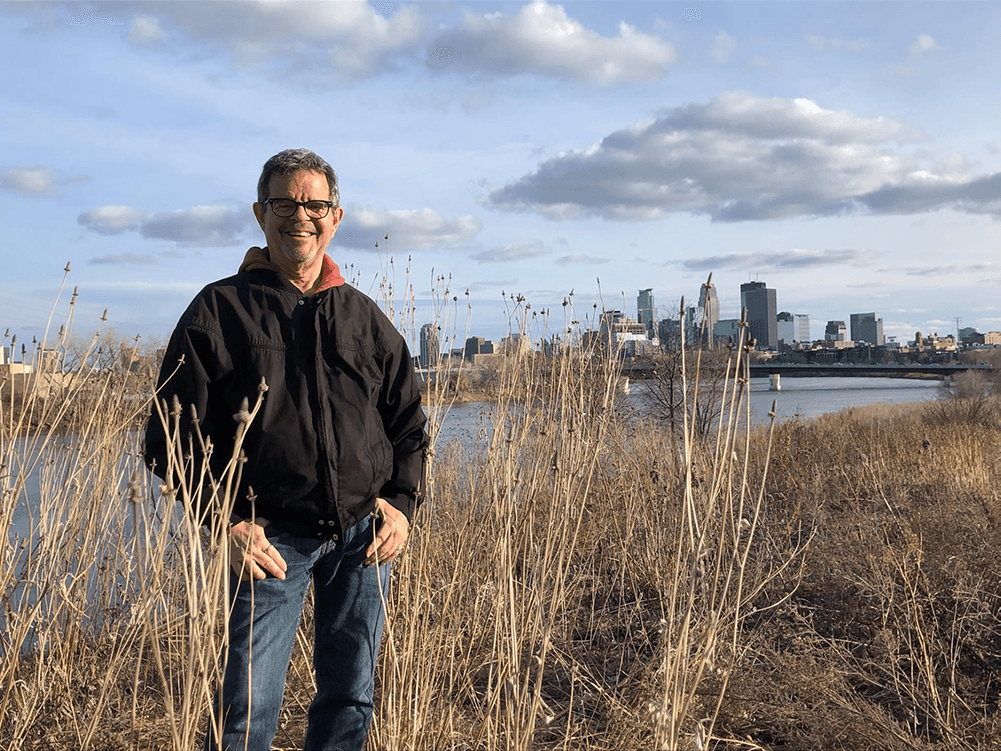 For Randy Miranda, volunteering every week to tend FMR's prairie restoration at Ole Olson Park near his home was a meditative way to give back and get through the pandemic. We're so grateful for dedicated volunteers like Randy. Check out opportunities to volunteer near you.

FMR’s land conservation and stewardship staff work hard to protect and restore habitat along the Mississippi River. This is an ongoing effort, and we can't do it alone — we depend on the help of volunteers to accomplish our restoration goals.

FMR ecologist Alex Roth chatted with Randy to recap his experience volunteering with FMR during the pandemic — from gathering native prairie seed to planting trees, from witnessing the first prairie smoke blooms to seeing the accomplishment in a giant pile of pulled weeds. His reflections illuminate his generosity and dedication, as well as FMR’s efforts to restore habitat while involving and educating the community along the way.

Alex: Tell me a bit about yourself and how you became interested in environmental issues.

Randy: I live adjacent to the Mississippi in Northeast Minneapolis. My first career as a journalist spanned 28 years and newspapers in Florida, Texas and locally at the Star Tribune. I moved into the nonprofit realm for six years as a director of marketing and communications before finding my place as a yoga, Pilates and meditation instructor.

As for my interest in the environment and climate, I grew up in Florida and have been involved in environmental causes since I was a teenager. In addition, I have been a weather geek since I was 10 years old. In fact, my original major in college was meteorology.

Alex: What made you interested in volunteering with FMR, and when did you start?

Randy: FMR was one of those peripheral groups I supported with an occasional donation until moving to our present home in 2014. I had previously lived in a single-family home in St. Louis Park, and since we had moved into a townhome, I missed working in my gardens.

In the spring of 2015, FMR sponsored a rain garden planting at Sheridan Memorial Park in Northeast Minneapolis, and since it was within walking distance, I signed up and attended. It was great to get my hands in the dirt (and mud!) again and really enjoyed volunteering with others of like mind.

Alex: What are some of the projects you’ve worked on with FMR? How did that change in 2020?

Randy: At the Sheridan Memorial Park project, FMR talked about starting a demonstration garden and native prairie along the river adjacent to Ole Olson Park, so I mentioned to a couple of the FMR staff members that I'd be interested in being a volunteer with that project. That has been something I have been a part of from the beginning in 2015, as well as the raised gardens and planting on Nicollet Island. [Note: FMR's 2,500 square-foot demonstration garden along the bike path at Ole Olson shows visitors what's possible with native plants.]

I have also been involved in several legislative projects for FMR through the River Guardians initiative and regularly attended Water Action Day at the state capitol until the pandemic.

There were two main changes for me in 2020. The first: With a reduced work schedule because of the pandemic, I was able to devote more time to maintaining the Ole Olson gardens. Alex and I would meet almost every Wednesday and work in the garden for 2-3 hours doing a variety of projects.

Since my partner's schedule was also reduced for several weeks, he joined the volunteer effort. We spent one day collecting native seeds, then spreading them in sparse areas along the river and spent another day planting native trees along the shoreline besides doing regular maintenance work in the garden in addition to my weekly Wednesday gig.

The second: Because of physical distancing and the ever-changing priorities of the pandemic, there was a reduced number of volunteer events at Ole Olson in 2020, and those that were scheduled had a limited number of volunteer spots. So because I live close and had more spare time, I spent some of it in the garden.

Alex: What was the goal of the work at Ole Olson? What did you learn along the way?

Randy: The goal at Ole Olson is to remove and control invasive species in the area, restore native prairie along the river and establish a demonstration garden that includes native grasses, flowers and pollinators in a plot stretching quite a distance along the walking and bike path.

Working with FMR and particularly you, Alex, I have learned so much about native plant species and the benefit they bring to bees, butterflies and other native habitat. I have also learned about invasive species, how to recognize them and how they can proliferate so easily. During 2020 it was almost impossible to keep ahead of the thistle in the garden. That said, we were relentless in removing it and had success keeping up with the removal of some of the other invasive plants.

Being more familiar with native species, their needs and growing conditions, has also allowed me to help my daughter in planting gardens in their new home. Those gardens are now almost exclusively native plants.

Alex: Any favorite plants, pollinators or other wildlife that you encountered while working at Ole Olson?

Randy: Prairie smoke is one of my favorite plants at Ole Olson. It starts to come back very early in the spring, and its flowers signal the beginning of the blooming season in the garden. The changes the garden goes through throughout the growing season are also amazing to witness.

Then there is mid to late summer when the prairie bursts into bloom, with its yellow and purple coneflowers, black-eyed Susans, yarrow, butterfly weed and a variety of grasses. Then in late summer, you can sometimes find monarch butterflies massed on plants in the garden, putting on quite a show. And occasionally, we'll see a fox, a gopher and even some deer here and there.

Alex: What was it like working outside each week?

Randy: It was absolutely wonderful. Didn't matter if it was cool and damp in the spring or hot and humid in the summer, it was great being out in the garden because there was always some indication of progress. It was definitely an effort, but it was also a very Zen-like activity for me and one that, for the most part, it was safe to go mask-free.

Alex: What was a lasting or memorable moment from the 2020 season?

Randy: We had a couple of stretches of drought in 2020, which kept the garden from being on full display during the height of the growing season. However, there was one Wednesday in particular that Alex and I went to town on the invasives and the pulled pile grew to quite the height. That was quite the sign of success.

Alex: What is one of the biggest takeaways you have from your work with FMR?

Randy: I have realized just how many folks will get involved, will get their hands dirty, who want to help. You also meet some really wonderful people when you volunteer.

The staff at FMR never takes that help for granted and is always so grateful for any and all help that they can get, from volunteering at the various sites to contacting city, county and state officials and government leaders to monetary support as well. Plus, I am continually learning more about plants, pests and weeds.

Randy: I'm a kayaker, and I love paddling upriver about a mile from the garden to Heron Island. It's the spot where the blue herons reestablished a colony to roost after the tornado ten years ago in North Minneapolis destroyed the habitat they were using for their roosting colony.

During the nesting season, you can float right under the trees, listening to the young chicks and watching the adults soar in to take care of the young. Later in the season, you can watch those young taking flight. And if you're patient, quiet and an early riser, you can sometimes find them feeding at the water's edge around sunrise in mid-summer.

Randy: I so enjoy the experience of getting my hands dirty, of tending something that can benefit so many. It is a very meditative place to be for me, and sometimes, with the restoration, you can imagine what the area was like before industrialization.

It has also been heartwarming to have so many folks out for walks stop and inquire about the garden and offer thanks for the effort. It's something I look forward to every spring. If you're in the area and see a middle-aged guy working in the garden, don't hesitate to say hi. I'm happy to share what I have learned from FMR's ecologists and volunteers.

Become an Above the Falls River Steward to restore habitat at places like Ole Olson Park in North and Northeast Minneapolis. Or check out our upcoming volunteer events to join us at dozens of project sites throughout the metro area.