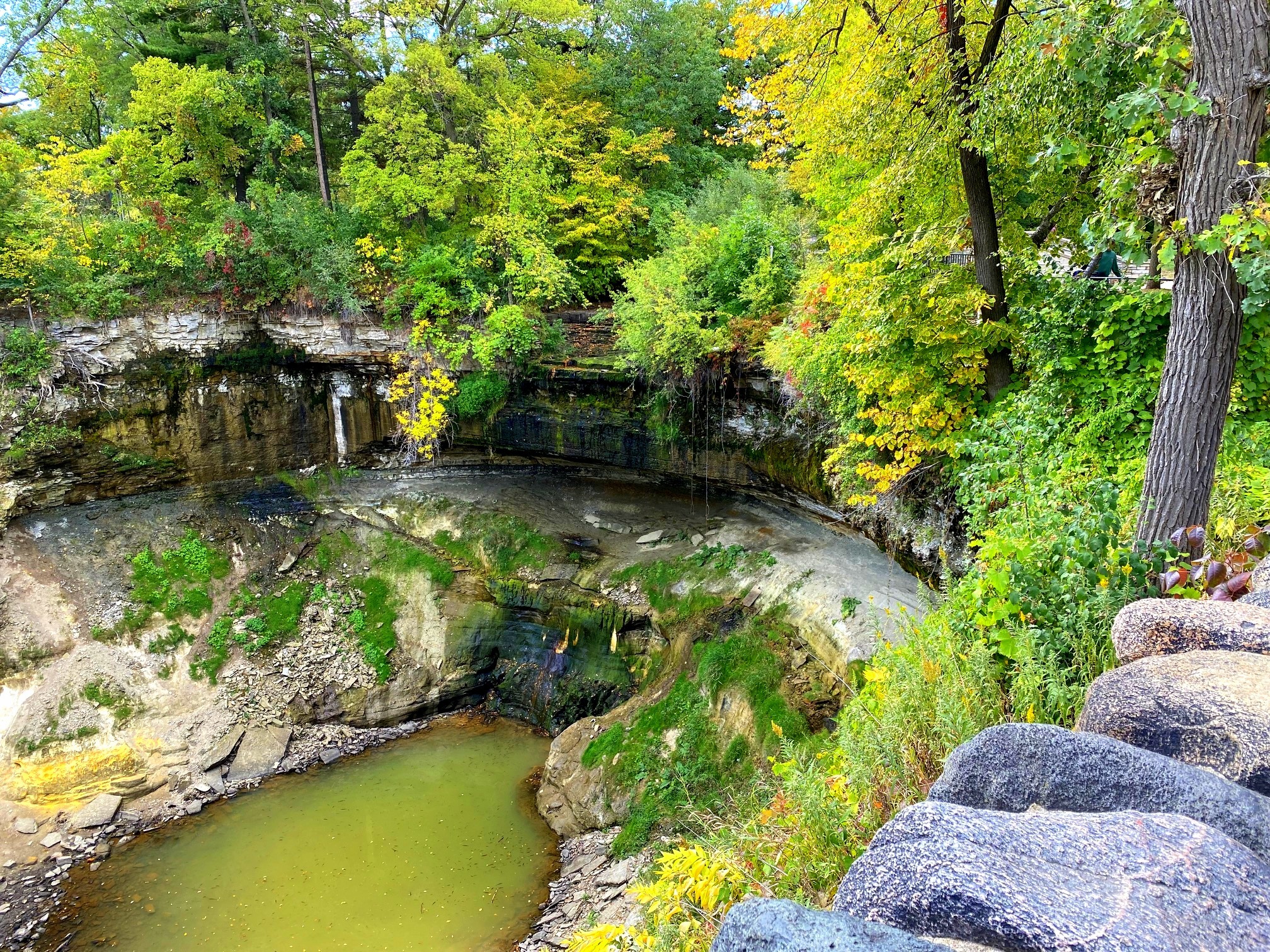 Here in Minnesota, Minnehaha Falls all but dried up as a result of a fall drought. (Photo by Joe Haupt, CC)

Some of the scenes are almost hard to believe.

Decades-old shipwrecks drying out in the exposed riverbed. Families walking out to an enormous stone landmark normally unreachable by foot. Barges loaded with corn and soybeans, stuck in place. The rapid construction of a new underwater barrier to stop saltwater from pushing upstream and contaminating drinking water.

All are the consequences of an enduring drought that has gripped much of the Mississippi River basin for months. The river is now at historically low levels.

Here in Minnesota, conditions range from "abnormally dry" to pockets experiencing "extreme drought." That includes portions of the Twin Cities, which experienced its driest September on record and sixth-driest October. While water levels in the Twin Cities reach of the Mississippi River haven't reached the drastic lows seen further south, signs of the drought are obvious.

Minnehaha Falls would be envious of a leaky kitchen tap. Lake Minnetonka is 20 inches lower than usual. And the number of river levels the DNR currently lists as "low" or "scrapable" is significant.

Many people are wondering what this might mean for the Mississippi River in our neck of the woods. Right now, it's impossible to say. Drought is a complex issue, one with effects that cascade in ways we can't fully anticipate. However, there are things we will be keeping a close eye on. Here are some of the potential impacts FMR's Water and Land Conservation programs will be monitoring:

These ultra-low water levels cast a dark shadow over the vibrant natural resource and recreation-based economy that generates nearly $500 billion in annual revenue, directly employs more than 1.5 million people and supports a $673 million shipping industry currently struggling to move goods along the river.

Nutrient pollution and the dead zone

On the somewhat-bright side, lower flows have reduced total delivery of nitrate-nitrogen pollution to the Mississippi River and the Gulf of Mexico. This nitrate pollution, primarily driven by cropland fertilizer runoff, is the primary driver of the Gulf dead zone. Lower flows this year resulted in a smaller-than-expected 2022 dead zone. If water flow remains low, will the 2023 dead zone shrink too?

There are areas of marsh along the river that have lost vegetation in the past due to either flooding or damming. In response, the Army Corps of Engineers has sometimes done drawdowns to revegetate backchannel wetlands. Could the drought have essentially the same effect as those drawdowns? And if so, might we see more native plant re-establishment, and the emergence of new habitat that could support wildlife and moderate the effects of future flooding?

Mature trees in floodplains are suffering as a result of Mississippi River flooding, with 2014-19 the wettest six-year period on record. As MPR News reported this summer, these recurring high water levels result in soil moisture levels that are stressing — and ultimately killing — many older trees along the river. This recent drought is essentially moisture level whiplash, with already suffering trees going from one extreme to the other. What kind of impact might this have, if any? We won't know for a long time, but we will be keeping an eye on it.

Why we need to act on climate and resilience now

We do know that the continued threat of climate change will make extreme weather swings, be it drought or flooding, more common. It's vital that leaders take steps to plan for and mitigate these disasters, with particular attention paid to disadvantaged communities that bear the brunt of the damages.

Here in Minnesota, that means living up to the Climate Action Framework's long-overdue goals and using the upcoming legislative session to translate those ambitions into tangible action. Nationally, passage of the Mississippi River Restoration and Resilience Initiative Act (MRRRI) would give states the funding and tools needed to prepare for what's to come.