The rusty patched bumblebee: What’s all the buzz about? | Friends of the Mississippi River
Skip to main content

The rusty patched bumblebee: What’s all the buzz about? 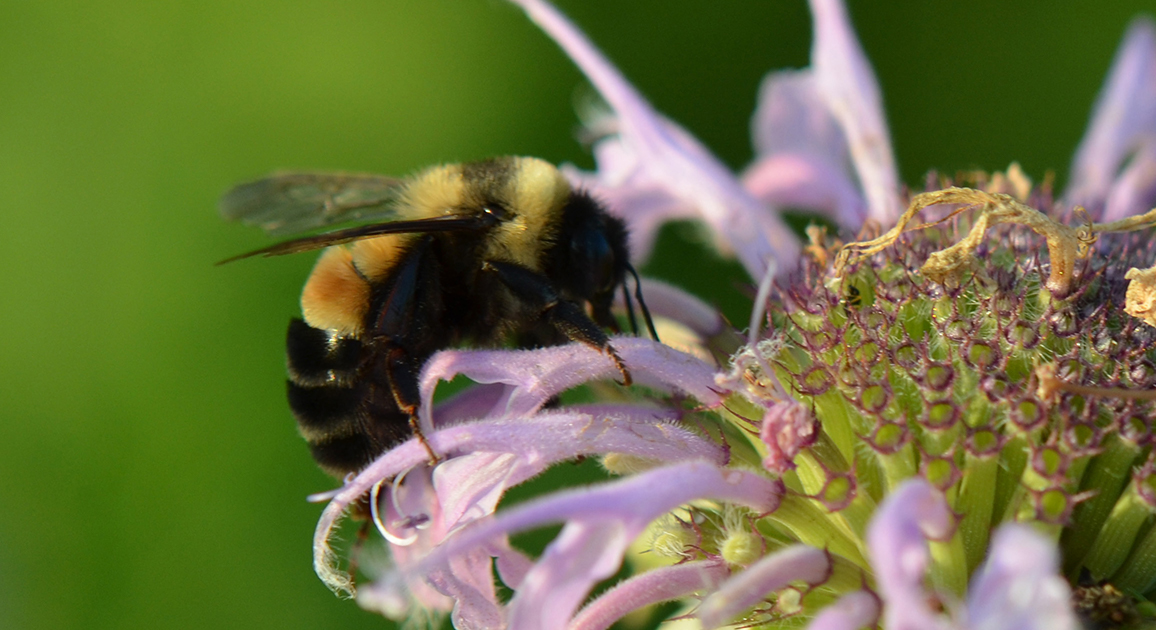 Minnesota's state bee, like many pollinators, is in decline. Restoring habitat will increase their chances of a comeback. (Photo by U.S. Fish and Wildlife Service: Rusty Patched Bumble Bee; public domain)

In May 2019, the rusty patched bumblebee became the first bee in the lower 48 states to be listed as federally endangered. Minnesota also officially adopted it as the state bee, including a pledge to protect it.

And in August, this rare bee made a welcome appearance at one of FMR's restored savanna sites.

The rusty patched bumblebee in decline

Once common in the Midwest and eastern United States, the population of rusty patched bumblebees has plummeted nearly 90 percent in the past 20 years throughout its range. Now found in just 10 states, Minnesota harbors the largest number: about 35% of the population, with most of the findings in the Twin Cities metro area.

According to University of Minnesota bee researcher Elaine Evans, 471 rusty patched bumblebees were found worldwide in 2018. Of these, 165 were in our state.

To help us measure how successful our restorations are at providing wildlife habitat, we've surveyed breeding birds at some of our sites for many years. But we've recently begun to evaluate some of our ecological restoration sites for insect pollinators as well.

This year, we hired wildlife biologist Chris Smith to survey the prairie and savanna restorations we've been working on for many years at the Flint Hills Resources bluff-land property in Rosemount.

One bee? No small thing

That means, based on 2018 numbers, this lone male represents approximately 0.2% of the known population of rusty patched bumblebees.

The rusty patched bumblebee is just one of many pollinator species worldwide that has declined in recent years. That's because their habitats have severely diminished in recent decades.

While our state bee may be no more or less important than any other bumblebee species, it serves as an indicator of the trends in the larger ecosystem.

Bumblebees are often considered keystone species, essential for the survival of numerous other species. They facilitate native wildflower reproduction which results in the seeds and fruits that feed wildlife as diverse as songbirds and bears.

Restoration pays off for pollinators

While the population decline of the species is sobering, it is heartening to know that restorations can serve a vital function for some species, including this one.

This year marks the 20th anniversary of FMR's restoration partnership with Flint Hills Resources. Their lands now support more grassland species, including an endangered pollinator — a positive indication that our collaborative efforts have paid off.

In 2018, FMR began training volunteers to conduct simple pollinator surveys using methods developed by the Xerces Society. As more people gather information about pollinators, we'll gain a better understanding of the population trends and how to protect them.

Join us to volunteer with FMR on our restoration sites and other projects.

Want to make rusty patched bumblebee habitat in your yard? Check out our tips on how to landscape for the river and for wildlife.