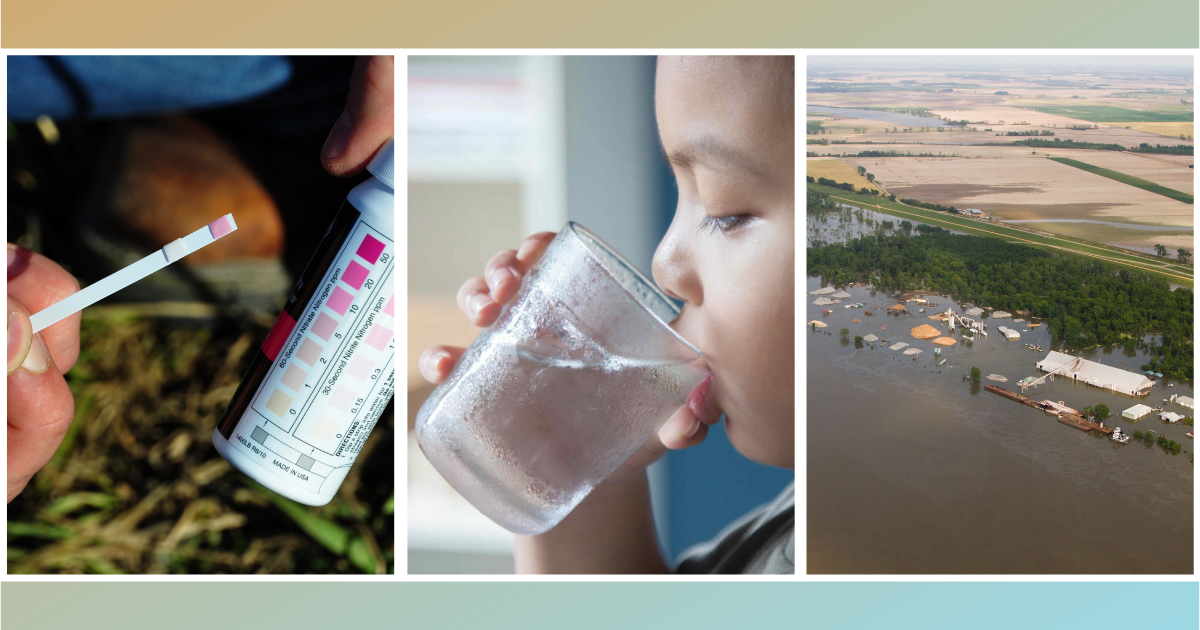 Like many environmental issues, these water and climate challenges often burden BIPOC (Black, Indigenous, People of Color) and poor communities the most. As we aim to restore water quality and aquatic life through changing conditions, we wanted to take a moment to reflect on how our Water program's work intersects with both climate change and climate justice.

Reducing the burden of nitrate pollution

We can’t have a cleaner Mississippi River, here in the metro or downstream, without reducing one of its biggest pollution sources: nitrate runoff from cropland, most often from fertilizers. Minnesota recognizes the problem and has crafted a plan — a state nutrient reduction strategy — to reduce nitrate levels by 45% from their 2014 levels by 2040.

Unfortunately, the state's progress has been disappointing. And research indicates that climate change may make this problem a whole lot worse.

A 2017 study in Science Magazine anticipated that nitrogen loading in the upper Mississippi River basin will increase by about 24% during the 21st century due to climate-change-induced precipitation changes, making an already-daunting water quality challenge almost impossible.

Nitrates aren't just a surface water problem. They're also a potent drinking water pollutant. Just 10 parts per million (the equivalent of seven drops of water in a bathtub) is enough to exceed the Minnesota Department of Health’s official Health Risk Limit. This is important to public health because more than a million Minnesotans — along with roughly 20 million Americans in 50 cities — get their drinking water from the Mississippi River.

Nitrate contamination also affects drinking water by contaminating the aquifers beneath our feet. Today at least 537 public water supply wells in Minnesota have elevated nitrate levels. Meanwhile, about 10% of private wells in vulnerable areas exceed the risk limit and are unsafe to drink, including some townships where preliminary data shows that 30% to 40% or more private wells are contaminated.

The disproportionate impacts of nitrate pollution

There are many ways in which the impacts of nitrate pollution are disproportionate. For today we'll highlight just two.

When it comes to surface water, the ~211 million pounds of excess nitrate that Minnesota sends down the Mississippi River each year contributes to the Gulf of Mexico dead zone. This devastation disproportionately impacts marginalized communities, particularly Indigenous communities and historically Black communities without the resources and economic alternatives to survive the worst of the financial fallout of this human-made natural disaster.

As for drinking water contamination, smaller and poorer communities lack the tax base for expensive water system upgrades, and lower-income households are less likely to have the means to install new wells or expensive in-home treatment devices.

This makes the equity implications of climate-driven nitrate contamination a significant concern for basic access to clean water here in Minnesota, in rural areas, and in downstream communities large and small.

What we're doing about nitrate pollution

FMR has been working for years to address this climate-change-exacerbated pollutant and its disproportionate impact.

Bigger storms are on the rise in the Midwest. As the 538 blog put it back in 2018: "Minnesota is getting wetter. Over the last 100 years, the state has seen more storms that produce heavy rainfall, and its strongest storms have grown more intense."

Combined with land-use changes and artificial drainage, climate-driven extreme weather flushes ever-more water off the landscape and into the river. As noted in our 2016 State of the River Report, the metro Mississippi’s average flow rate increased 24% between 1937 and 2014.

Naturally, the increased river flow leads to more flooding. Parts of the Midwest experienced extensive flooding in recent years, including 2019 when the river inundated communities from Iowa to Louisiana. We can expect this trend to continue, with costs only rising over time.

The disproportionate impacts of increased flooding

Like most disasters, floods often hit underserved communities the hardest. As the National Academies of Sciences, Engineering and Medicine put it: “Low-income neighborhoods containing the poor, racial and ethnic minorities, the elderly, and the disabled…” are “disproportionately affected by flood events.”

Lower-income, ethnically diverse communities are more likely to live in areas most susceptible to flooding, where homes are cheaper. This has played out in rural and suburban areas in Iowa and North Carolina, as well as ultra-urban environments like New York City (Superstorm Sandy), Houston (Hurricane Harvey) and New Orleans (Hurricane Katrina).

Communities of color in high-risk areas are less likely to have flood insurance due in part to federal flood insurance maps failing to account for climate-driven increases in flooding properly.

What we're doing about flooding

*In an article about climate change, you might expect us to note that certain crops can "capture and store carbon" instead of "capture and store water." We're concerned that permanent carbon sequestration in agricultural soils may be practically difficult to ensure. FMR is working with our conservation partners and the scientific community to convene conversations with state agencies to make sure we get the science right before supporting investments in agricultural carbon sequestration programs.

As a result, many experts predict farm consolidation will accelerate as ever-larger mega-farms continue to replace smaller farms (with less capital and access to debt financing). Economically disadvantaged farmers, including BIPOC farmers, will be even less likely to secure land and farm profitably.

FMR is not a farming organization, but in our work to reduce the biggest source of river pollution by providing farmers with an opportunity to grow profitable “clean-water crops,” we want to be careful not to unintentionally reinforce or exacerbate existing inequities in our farming system.

The crops that we’re supporting through the Forever Green Initiative and Partnership are more resilient to extreme weather and can better handle our changing climate, also limiting the financial strain on producers. As these new crop options roll out, we’re working with state and local governments, supply chain businesses, farmers and others to ensure that BIPOC farmers have a seat at the table, access to highly sought-after seed and the technical assistance they need to succeed.

The Enbridge Line 3 Pipeline crosses more than 200 streams in the Mississippi River headwaters, impacting hundreds of acres of wetlands. The line represents a massive investment in delivering the dirtiest and most carbon-intensive tar sands oil to market.

While FMR pipeline issues are not a major focus of our work, we do believe this is a catastrophic mistake in the face of a global climate crisis. That's why we signed on to an open letter to Minnesota decision-makers in the Star Tribune, and we'll continue to follow the lead of our ally water protector organizations on this issue.

What can we do about climate justice and water issues?

We don't have one simple solution to these problems. What we do have is you, and people just like you across the state who care about public health, clean water, and environmental justice.

Together, we can make a difference. If you share our belief that every Minnesotan deserves access to clean and safe drinking water, healthy lakes and streams, and a sustainable future, please become a River Guardian.

Sign up as a River Guardian, and we'll email you when there's a chance to act quickly to address issues like these at the intersection of climate change, water quality and environmental justice.